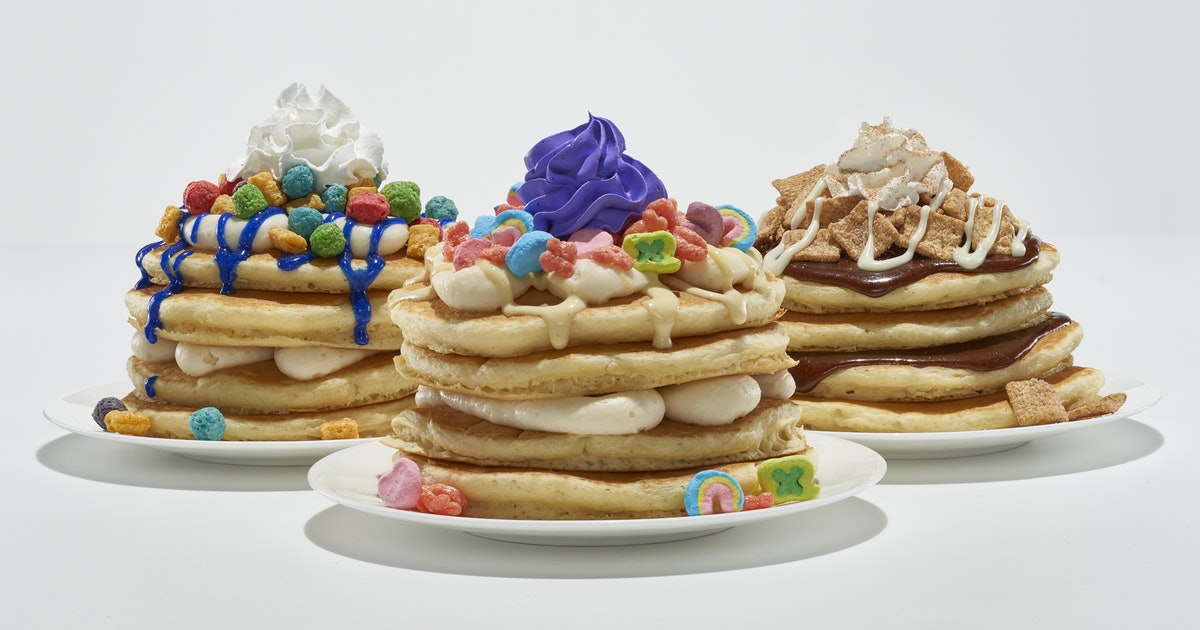 It’s time to spice up your morning routine with a new lineup of goodies at IHOP. IHOP’s new Cereal Pancakes and Milkshakes will get you nostalgic for your fave breakfast bites from childhood. Get ready to kick off spring with some super sweet treats.

IHOP is selling limited-edition Cereal Pancakes and Shakes from Monday, March 2 through Sunday, April 12. The restaurant chain partnered with your go-to cereal brands — Cinnamon Toast Crunch, Lucky Charms, and Cap’n Crunch Berries — to create a collection of new menu items. So, if you can’t make your mind up when deciding between cereal or pancakes in the morning, IHOP has you covered.

Of course, all of these cereals are tasty on their own, but who can say no to pancakes and purple frosting? The Cereal Pancakes sell for between $10 and $12 per stack, but prices may vary by location.

You can pair your flapjacks with two special-edition shakes. The Cinnamon Toast Crunch Milkshake is a blend of vanilla ice cream and Cinnamon Toast Crunch cereal. It’s topped off with whipped cream, even more crunchy cereal, and cinnamon sugar. If you’re in the mood for a fruity treat, opt for the Crunch Berries Milkshake, which combines vanilla ice cream with Crunch Berries cereal. It’s finished off with blue vanilla sparkle sauce, whipped cream, and more cereal. The sweet AF milkshakes sell for $5, but prices may vary by location.

You’ll also want to mark your calendar for the St. Patrick’s Day celebration at IHOP on Tuesday, March 17. You can score $1 St. Paddy’s Day Cakes from 7 a.m. through 7 p.m. local time. The holiday-themed stacks include two Irish-green pancakes and are topped with sweet cream cheese icing, Fruity Lucky Charms cereal, and whipped cream. To find a restaurant near you serving up the stacks, check out IHOP’s store locator.

With so many breakfast deals to look forward to, you might even become a morning person this spring.

November 29, 2021November 28, 2021
Tenants begin to look ahead after fire at their building CBC.ca Read more: www.cbc.ca