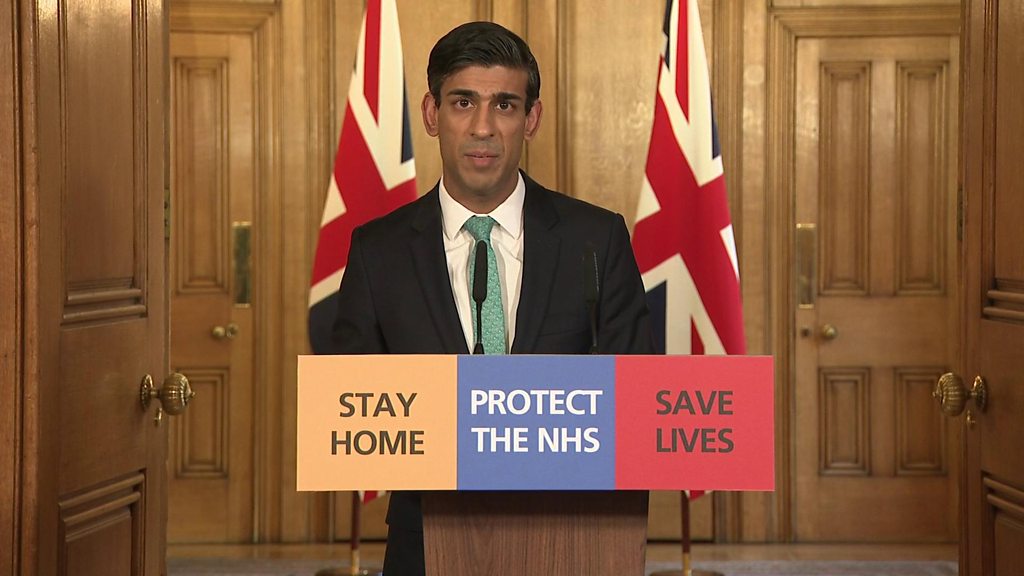 Self-employed workers can apply for a grant worth 80% of their average monthly profits to help them cope with the financial impact of coronavirus, the chancellor has announced.

The money – up to a maximum of £2,500 a month – will be paid in a single lump sum, but will not begin to arrive until the start of June at the earliest.

Rishi Sunak told the self-employed: “You have not been forgotten.”

Wage subsidies of 80% for salaried employees were announced last week.

Shortly after the chancellor spoke, the number of people in the UK who have died with Covid-19 – the disease caused by coronavirus – jumped by more than 100 in a day for the first time.

The government had faced criticism for failing to provide support for self-employed and freelance workers in its earlier package of economic measures.

Mr Sunak said the steps taken so far were “already making a difference” but it was right to go further “in the economic fight against the coronavirus”.

The scheme does not cover people who only became self-employed very recently – the chancellor said they would have to look to the benefits system for support.

Coming up with a workable scheme had been “difficult”, he continued, because the self-employed were a “diverse population” and some of them earned a great deal.

But in all, the “fair, targeted and deliverable” plan would help 95% of people who earn most of their income via self-employment.

“We have not left you behind, we all stand together,” he added.

Communities Secretary Robert Jenrick later told the BBC’s Question Time that even where self-employed workers were unable to provide full financial records going back three years, the government was urging people to “give us what they’ve got and we will work through it with HMRC to see if there’s a way to support you”.

The Federation of Small Business, which represents many self-employed workers, welcomed the intervention, saying: “Although the deal is not perfect, the government has moved a very long way today.”

But Labour’s shadow chancellor John McDonnell said he was worried the money would come “too late for millions”.

“People need support in the coming days and fortnight… there is a real risk that without support until June the self-employed will feel they have to keep working, putting their own and others’ health at risk.”

Labour leader, Jeremy Corbyn, said the government had been too slow to recognise the severity of the crisis.

Torsten Bell, from think tank the Resolution Foundation, said the very significant package stood in “stark contrast” to the “much less generous” support being given to employees who lose their jobs or see their hours cut during the crisis.

The Coronavirus Self-Employment Income Support scheme is another extraordinary, multi-billion pound support, reflecting the brutal economic impact of a shutdown designed to keep the pandemic in check.

In recent days, Treasury ministers appeared to be trying to dampen down expectations, telling MPs it was problematic to establish a fair scheme, and the employee job retention scheme would be the logistical priority.

The government wants to set up the scheme to keep employed jobs as the priority first, so the banks will need to be relied on to support many of the self-employed with overdrafts to tide them over until the grant goes into their bank accounts in about 10 weeks’ time.

The sting in the tail? The chancellor said he can no longer justify, after things get back to normal, that self-employed people pay less tax than the employed. But that is for another day.

In the UK, more than 11,600 people have now tested positive for coronavirus – although the actual number of cases is likely to be far higher.

The peak of demand for intensive care was expected to come in two to three weeks, but speaking alongside the chancellor at Thursday’s briefing, England’s deputy chief medical officer, Dr Jenny Harries, refused to be drawn on any predictions.

She said the UK was “only just starting to see a bite in the interventions – the social distancing – that have been put into place”, but things appeared to be “starting to move in the right direction”.

The government has imposed strict controls on everyday life designed to slow the spread of the disease.