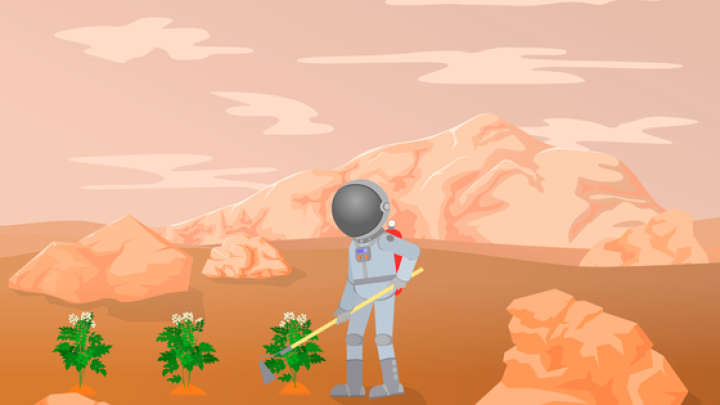 If you ever find yourself short on urine, festivals are a great place to find some. Thousands of animated characters sipping flat, tepid cider makes for many a broken seal, which is precisely why Dutch scientists turned to an Amsterdam festival when they needed some urine to help grow green beans in lunar soil. Research results reported by Wageningen University & Research show the approach holds water, but drug-filled urine is preventing the team from tasting their crops.

If you’ve seen The Martian, you may remember a harrowing scene where a malnourished Matt Damon resorts to his own excrement in order to cultivate a crop of potatoes to keep him alive during his solo retreat on Mars. While the concept that anyone could go about this chore with such good humor and grace is completely farcical, using human waste for boosting crops is actually a sensible idea.

More conventional fertilizers widely used to improve crop yields of foods such as potatoes, tomatoes, and carrots are rich in nitrogen, phosphorus, and potassium, and as luck would have it so too is piss. A team of Mars and Moon soil researchers led by Dr Wieger Wamelink of Wageningen University & Research decided to carry out tests to see if human urine could be applied to boost the growth of green beans in lunar soils. They figured it would be a sensible fertilizer to investigate as it’s one substance we could guarantee we wouldn’t be in short supply of if a colony was ever established on Mars or the Moon.

The recipe for these festival-piss Martian Beans called for struvite, a solid form of urine made by combining it with magnesium that is known to occur naturally within the body resulting in painful kidney stones. The team filled 30 pots with lunar soil and 30 pots with terrestrial soil, each containing three bean seeds, and added struvite to 50 percent of the pots from both groups. The first beans arrived as an early Christmas gift to the researchers, supporting their hypothesis as the struvite-treated plants performed best.

“We were certainly thrilled with this result, which was faster than we expected, although it meant I had to work between Christmas and New Years’ Eve,” Dr Wamelink said in a statement. “Soon enough the lengths of the plants started to vary, showing that the crops planted in potting soil and lunar soil simulant with struvite experienced the strongest growth.”

The struvite crops yielded more than 2 kilograms (4.4 pounds) of beans, while the plants that went without only produced a handful. Unfortunately, the known-to-be-high illegal drug content of festival urine meant the team were unable to feast upon their harvest. Dr Wamelink told The Telegraph, “the stuff that people take at these festivals, that ends up in the urine. Even though we know now that is almost 100 percent pure and it is safe to use. We are waiting for legislation. I would eat it though, but am not allowed and as a scientist I should wait for the official approval.”

Changing the legislation over the use of struvite as a fertilizer could tackle the negative impacts festival wastewater is known to have on the environment. Back in 2016, Glastonbury was taken to court and threatened with being forced to move from its namesake location due to their handling of human sewage. Festival goers taking a slash outside of the drop toilets were devastating nearby marine ecosystems as algal blooms brought on by the polluted water resulted in eutrophication, sapping oxygen from the lakes and waterways.

Find out how much of The Martian is fact and fiction or take a look at these charts that show how long illegal drugs stay in your system.