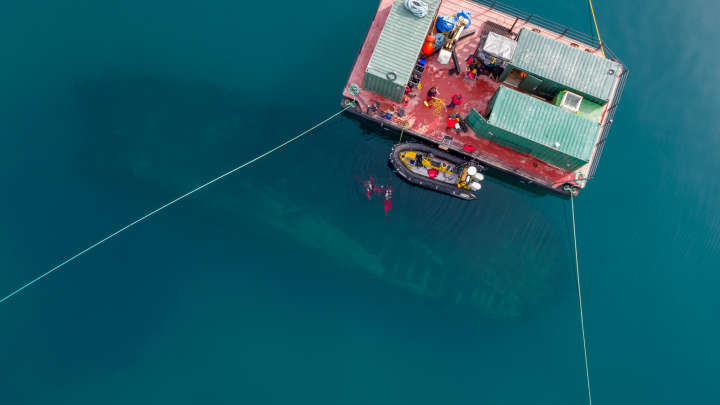 A collaborative team of researchers continues to piece together the circumstances underlying the mysterious disappearance of Sir John Franklin’s ill-fated expedition in search of the Northwest Passage. Now, underwater archaeologists unveil more than 350 newly recovered artifacts from HMS Erebus, one of two ships lost in the Arctic waters.

The mission makes up the largest, most complex underwater archaeological recoveries in Canadian history. Over three weeks in the fall of 2019, Parks Canada’s Underwater Archaeology Team conducted 93 dives on HMS Erebus, logging nearly 110 hours. Divers used both traditional and innovative strategies to remove sediment from the buried artifacts so that they were able to map, photograph, and recover items including epaulets from a lieutenant’s uniform, ceramic dishes, a hairbrush with a satinwood handle and either boar or porcupine bristles, as well as a pencil case with its contents still inside. A number of recovered items believed to belong to the captain’s steward, Edmund Hoar, were also recovered, including sealing wax with a fingerprint.

The items are currently housed at Parks Canada’s Conservation Laboratories in Ottawa where they are undergoing preliminary analysis that includes identifying their physical characteristics, conducting X-rays, creating illustrations and photographing of the items.

Last August, Parks Canada released never-before-seen footage of HMS Terror, the sister-ship of Erebus. The two ice-strengthened vessels left the River Thames in London in 1845 under the command of Captain John Franklin, who was attempting his third voyage in search of a Northwest Passage connecting the Atlantic and Pacific Oceans. Two months after setting sail, the vessels were seen in Baffin Bay east of the passage entrance before disappearing with all 129 crew members. For the last 170 years, a trail of clues and oral accounts have allowed experts to piece together what may have happened to the expedition. Notes left by the crew explain that many of them survived for two years, living off their supplies of tinned food while their numbers slowly diminished, including Captain Franklin who died in June 1847. By April 1848, the remaining crew decided to walk towards the Canadian mainland, where Inuit reports describe seeing horribly thin white men. None of them survived, and mystery still surrounds the loss.

The discovery of the crew’s artifacts contributes a deeper understanding of historical and Inuit oral accounts of the Franklin expedition.

“The sheer volume of discoveries this year at HMS Erebus is an exciting development in our ongoing work at the Wrecks of HMS Erebus and HMS Terror National Historic Site,” said William Beveridge, Executive Director Inuit Heritage Trust, in a statement. “As more stories of the Franklin Expedition and its association with Inuit are revealed through these latest discoveries, the Trust will continue to incorporate Inuit Qaujimajatuqangit in the preservation, presentation, and management of these artifacts with our partners in Parks Canada.”

Today, the locations of the two vessels have been designated a National Historic Site jointly managed by Parks Canada and Inuit leaders. It is not open to the public and a permit is required to enter the protected areas.