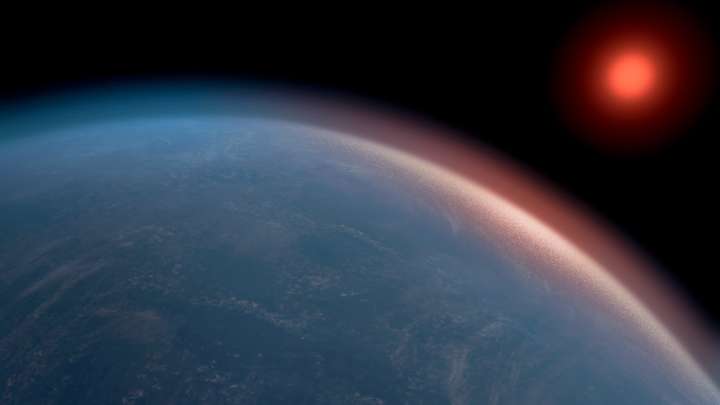 Researchers have identified an exoplanet that may have the right conditions for life. K2-18b is a peculiar world, much heavier than our planet and quite a bit larger, with an atmosphere rich in hydrogen. It is also located in the habitable zone around its star where liquid water can exist. Researchers now believe that the planet might just have the right conditions for liquid water.

K2-18b sits in between Earth and Neptune in mass and size, bordering between the two nebulous categories of super-Earth and mini-Neptune. The planet intrigued researchers and the wider public after the detection of water vapor in its atmosphere. But that detection alone doesn’t make the planet habitable.

As reported in The Astrophysical Journal Letters, researchers from Cambridge University have used computer simulations to establish what the atmosphere and the interior of the planet are like. This is crucial to establish potential habitability.

“Water vapor has been detected in the atmospheres of a number of exoplanets but, even if the planet is in the habitable zone, that doesn’t necessarily mean there are habitable conditions on the surface,” lead author Dr. Nikku Madhusudhan from Cambridge’s Institute of Astronomy, said in a statement. “To establish the prospects for habitability, it is important to obtain a unified understanding of the interior and atmospheric conditions on the planet – in particular, whether liquid water can exist beneath the atmosphere.”

Using existing observations, the team produced potential scenarios to explain  atmosphere. If the planet’s hydrogen envelope – an accumulation of hydrogen and other volatiles that surrounds a rocky core – is too thick, the temperature and pressure on the surface of the possible rocky core might be too much for liquid water to exist.

“We wanted to know the thickness of the hydrogen envelope – how deep the hydrogen goes,” explained co-author Matthew Nixon, a Ph.D. student at the Institute of Astronomy. “While this is a question with multiple solutions, we’ve shown that you don’t need much hydrogen to explain all the observations together.”

The simulations suggest that the hydrogen envelop weighs at most 6 percent of the planet, although in many scenarios is much lighter than that. The exciting part is that some scenarios show that the planet could have a liquid ocean at temperatures and pressures similar to Earth’s own.

This doesn’t mean that K2-18b hosts life or that it is certainly habitable but it shows that super-Earths and mini-Neptunres can’t be discounted a priori in the search for life outside the Solar System.