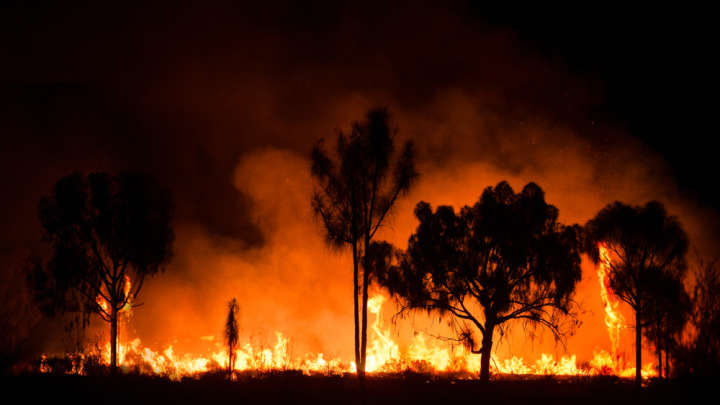 As the world looks on in horror as Australia’s bushfires consume an area larger than Scotland the nation’s Bureau of Meteorology has released its Annual Climate Statement for 2019, and the cause of the fires is not hard to see.

Globally, 2019 was the second hottest on record, but in Australia, it went one worse. Across the continent, temperatures were 1.52ºC (2.74ºF) above the average since reliable measurements began more than a century before. The previous record was 1.33ºC (2.39ºF), set in 2013.

The rainfall record was even further outside previous ranges, with the continent as a whole averaging 277 millimeters (10.9 inches), despite unusually heavy early rains in some northern regions. That is more than 10 percent below the previous record low of 314 millimeters (12.4 inches).

Fires are caused by local conditions, not national averages, but Head of Climate Monitoring Dr Karl Braganza pointed out that the distribution of heat and rain made things even worse. “Just a few weeks ago in December, we saw the Australia-wide record hottest daily average maximum temperature broken multiple days in a row,” he said in a statement. “At the same time, rainfall deficiencies across large parts of eastern Australia have continued to increase, unfortunately exacerbating both drought conditions and the current bushfires.”

The underlying trend to hotter conditions worldwide, and dryer ones in southern Australia, has been amplified by an exceptional Indian Ocean Dipole and a rare Sudden Stratospheric Warming event over Antarctica.

A government that has derailed climate action and refused to fund resources for fire services prior to the catastrophe has been desperate to pin blame anywhere else. Media outlets that encouraged climate denial are similarly keen to find other scapegoats, bolstered by a mysterious army of social media bots.

The most widespread claim, that fuel reduction burning has been reduced because of “greenie ideology” has been consistently refuted by the bodies that implement the cool-season burns. Fuel reduction programs have been conducted at rates close to historic norms, until the exceptionally dry conditions made them too dangerous to attempt.

More recently, the fires have been blamed on arson. Although this, unlike the first redirection, has a grain of truth, it has been greatly exaggerated. People fined for dropping cigarette buts or operating spark-releasing machinery in risky conditions have been lumped in with arsonists to make the figures look bigger.

The same sources will inevitably dispute the report using claims the 1896 heatwave was greater, ignoring the fact that prior to 1910 many Australian weather stations used equipment that overstated temperatures in hot conditions.

Climate reports stretching back decades have warned continued fossil fuel burning would change Australia’s climate to one that would encourage fires. In 2019, that is what happened, and the nation is reaping the blazing whirlwind.