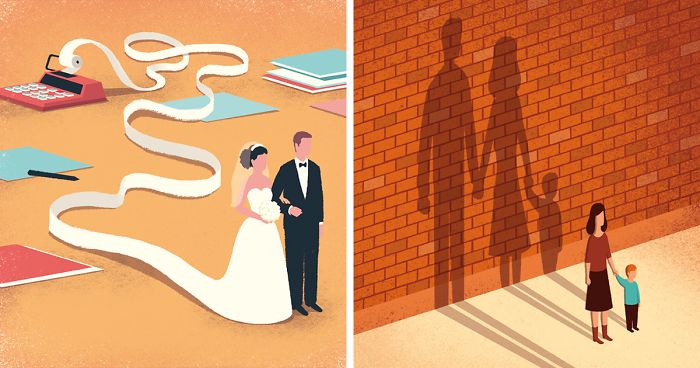 Art has recently grown into a relatively strong medium to convey critique. Whether it’s of the way we live our lives, the way “things are done” in our society, or the way we abuse the planet (or abuse each other).

In a world where a single picture can tell a thousand words—how information is much more consumed via imagery rather than language—art turns out to be an effective way to understand the scope of an issue and to call for change.

This is the trajectory that artist and illustrator Davide Bonazzi has also chosen. He creates witty illustrations that critique today’s world and society. Bored Panda has also got in touch with Bonazzi to elaborate on his work. There is more artwork to be seen in a previous Bored Panda article here as well as on Bonazzi’s Website.

Although his education was mostly based on literature and liberal-arts, Davide has always had a huge interest in visual arts as well. “After university, I spent a year at the European Institute of Design in Milan, then two more years at the Academy of Fine Arts of Bologna,” he told Bored Panda. “I’ve come to know what illustration is exactly through practice. I’ve had a few great teachers who really inspired me.” The artist describes his illustrations as “straightforward, conceptual, surreal and sometimes ironic.” Davide said he likes using visual metaphors to create “twists” in his works. This helps him turn an apparently plain scene into something unexpected and more meaningful. Even if it’s just a small detail. “I’ve always been an optimistic person, though the more I learn about the world we live in, the more I feel worried about our future,” Davide added. “Especially, the ecological crisis. It seems we’re at the start of a global challenge with an uncertain outcome, and we all have to do our part. In the past decades, people had been taught to be selfish, to consume. I think it’s crucial to eradicate this trend.”