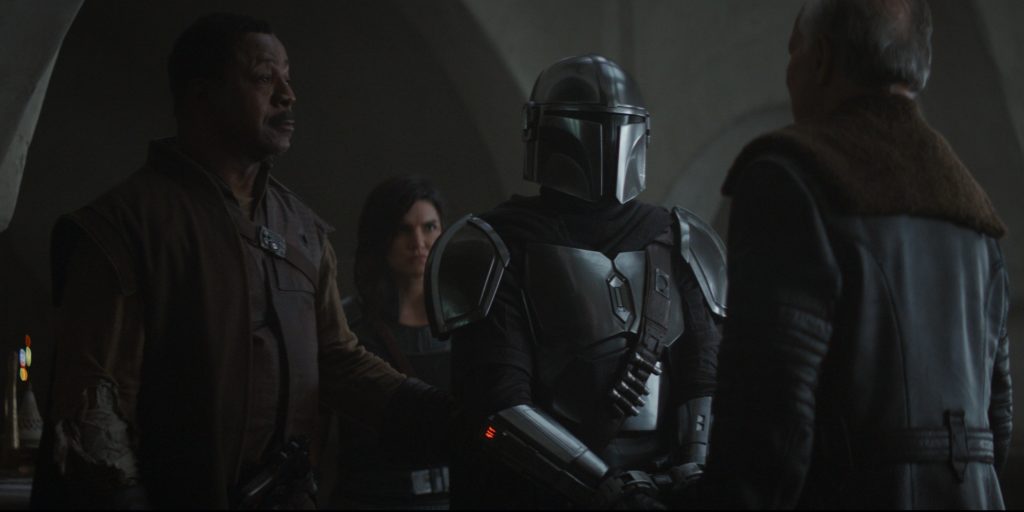 As much as Baby Yoda has become ubiquitous with The Mandalorian since it premiered on Dec. 12, its incredibly easy to forget that, despite his complete internet takeover, the number of countries that can legally watch The Mandalorian is still surprisingly small. So when youre trying to introduce a new element, such as a recanonized Force ability, that could potentially be important for, lets say, an upcoming Star Wars film coming out in two days, you limit who can see that information. We already saw that interconnectedness with early Agents of S.H.I.E.L.D. and well certainly see it again with Marvels Disney+ shows, so its not out of the realm of possibility, especially when Star Wars takes place over one overarching timeline.

That potential information, however, is just one part of The Reckoning, The Mandalorians best episode to dateand one, under the direction of Deborah Chow (The Sin), that one that features reunions and heightened stakes before leaving us with a hell of a cliffhanger that makes us wonder what the hell is going to happen to Baby Yoda.

Although I definitely enjoyed the simplicity that The Mandalorian offered in its first six episodes, the standalone plots offered a sense of disconnect for some fans. Thats certainly not the case here. Most of the major characters, aside from Moff Gideon (Giancarlo Esposito), are familiar to us as the Mandalorian travels across the galaxy to recruit pretty much everybody he hasnt pissed off or killed for one last job.

That job comes courtesy of Greef Carga, who proposes that he and Mando team up to get rid of the Client, whos essentially taken complete control of Nevarro with his own brigade of stormtroopers. If he does, Mando is cleared by the Guild and he and Baby Yoda can walk free. Mando doesnt trust Carga, and for good reason. But the allure of no longer having to avoid a slew of bounty hunters sounds appealing, so he goes to formulate his own motley crew.

Considering the sheer number of dead stormtroopers, bounty hunters, assassins, and droids that have fallen at Mandos feet since the beginning of the series, hes limited on just who he can trust. He goes back to Sorgan to fetch Cara Dune, who worries that merely going to Nevarro drastically puts her life at risk; she hints that her exit from the shock troopers wasnt a simple retirement, and she notes that a lot of what shes done since then carries a life sentence. He finds Kuiil still reluctant to join the fight, even if its simply to protect Baby Yoda; hes very proud of the fact that he bought his way out of indentured servitude. But the Ugnaught has a wildcard up his sleeve. He salvaged and reprogrammed IG-11, who is now programmed to protect and serve tea to the anti-droid Mandos chagrin.

Droids are not good or bad, Kuiil notes. They are neutral reflections of those who imprint them.

Kuiils reprogramming of IG-11, which isnt just a matter of putting a droid back together after being shot and toggling a good or evil switch, is fascinating. He says that IG-11 developed a personality on its own, but the only reason the droid developed its own personality is because Kuiil made IG-11 perform menial tasks until he learned to essentially be a droid again. It puts what little we know of K-2SOs reprogramming by Cassian Andor in a new light, but also highlights, albeit in an almost roundabout way, just how little choice droids have even when the appearance of choice and free will is presented.

In the grand scheme of The Reckoning, IG-11 ends up being the least of his worries. Baby Yoda is becoming harder to control. He can no longer be left alone in the Razor Crests cockpit. When Mando and Cara put on a friendly arm-wrestling match, Baby Yoda thinks that Mando is in danger and places a Force-choke on Cara. Mando stops him before Baby Yoda can kill her, but it clearly spooks everyone out while Kuiil appears to have a clearer idea of the power Baby Yoda holds.

Baby Yodas powers are shown in another light after a group of winged and poisonous creatures attack Mando, Cara, Kuiil, Carga and two other bounty hunters, who are camping out in the middle of nowhere en route to town. It results in Carga getting scratched, and despite attempts to save his life, it looks like hes a goner up until Baby Yoda reaches out and uses the Force to heal his wound. The crew is stunned (and Carga later shoots his colleagues instead of letting them kill Mando), but we know its not the first time Baby Yoda tried to use that ability.

This now brings Force healing back into the Star Wars canon. In Legends (formerly known as the Expanded Universe), Force healing is an ability largely associated with the Jedi. But those who aligned with the dark side of the Force could also implement that ability, albeit a more twisted and costly version of it. In official Star Wars canon (films, TV shows, and tie-in materials released after Lucasfilm decanonized the EU in 2014) Force healing is a brand new ability, something weve never seen any of the Jedi, not even Master Yoda in his prime, use before. It leaves a lingering question about why were being shown this ability nowthis episode was released two days earlyand what it might mean for The Rise of Skywalker.

Instead of the future, the Client is more focused on the past. As Mando is presented to him in cuffs, the result of a diversion plan set in action, the Client waxes on about how avoidable the downfall of Mandalore was if they had only welcomed the Empire in with open arms. He surrounds himself with stormtroopers and dons Empire insignia, looking back with the rose-tinted glasses that being in power and the passage of time so easily allow.

But he feels the cruel strength of a foregone Empire for himself as hes laid to waste by soldiers, and Mando, Cara, and Carga soon witness it as Moff Gideon rolls in on a TIE fighter and orders his troopers to capture Baby Yoda, which they do after killing Kuiil, who was sent back to the Razor Crest to get Baby Yoda to safety.

Were left with our first real cliffhanger in The Mandalorian, one thats all the more pressing for both the cute factorwe really dont want anything bad to happen to Baby Yodaand the fact that were going to have to wait over a week for the conclusion. With only one episode left until the end of the season, The Mandalorian has finally introduced the kind of stakes that hook us in when the Baby Yoda sheen starts to fade. We care about Baby Yoda, yes, but with Cara and Carga on Mandos side, we now have an unlikely team of loners who, despite where they might have come from, are willing to risk it all to save one of their own.