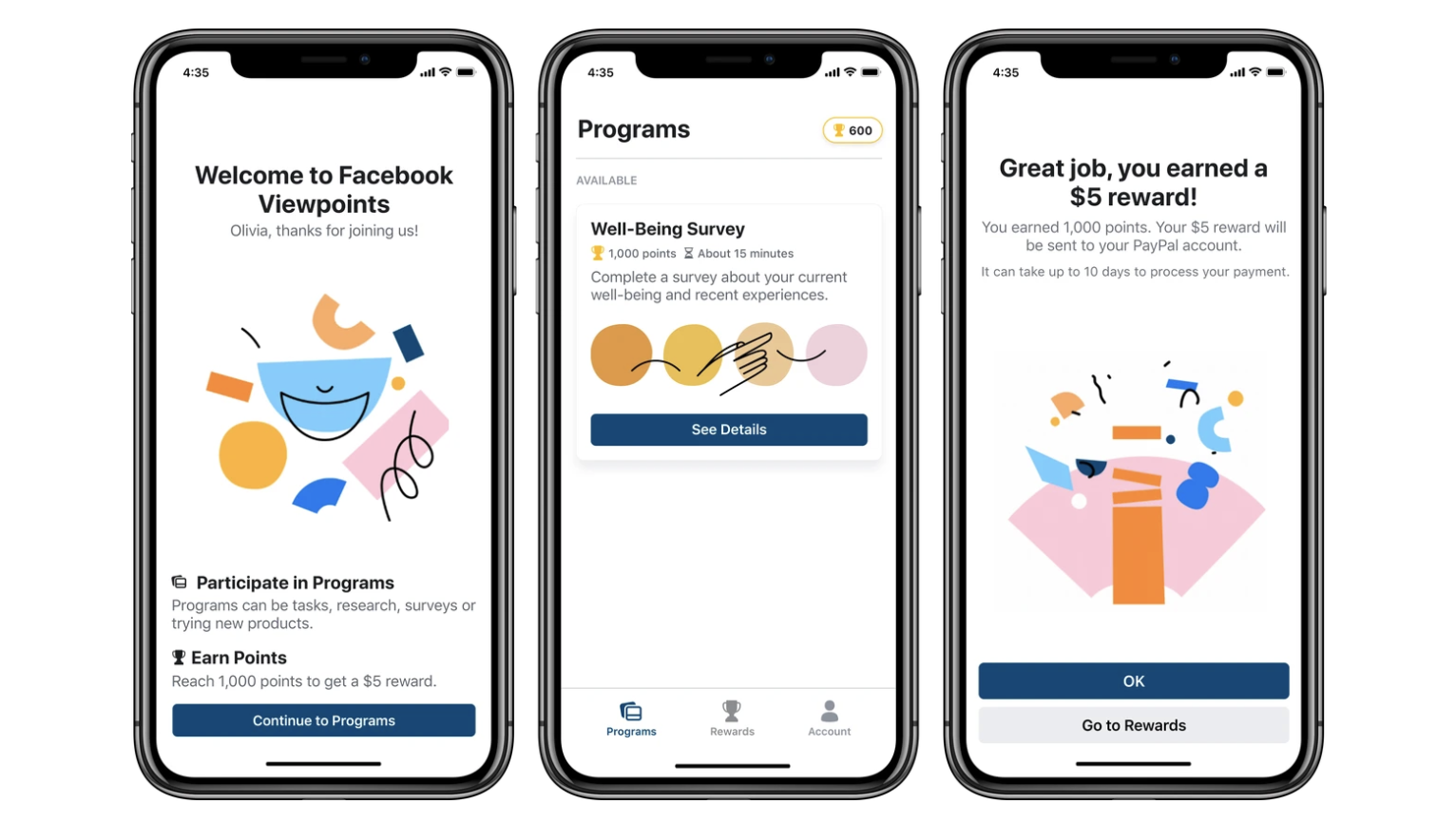 Facebook is launching a new market research, task, and product testing program that lets users earn money. Starting today, people in the US who are over 18 can download Viewpoints and participate in a well-being survey so Facebook can learn to “limit the negative impacts of social media and enhance the benefits.” Other opportunities include completing online chores on behalf of Facebook, or trying out new apps or devices ahead of launch so Facebook can refine them.

The well-being survey will take about 15 minutes score users 1000 points, which translates into a $5 reward that’s paid over PayPal. People interested in signing up can join Viewpoints here. The company claims it will only use the data collected internally and won’t sell it. Facebook Viewpoints is available on iOS and Android, and the company plans to open the app to more countries next year.

The question is whether users will be comfortable giving up even more data Facebook. Many are already creeped out by Facebook, but the monetary incentive might override their morals.

Meanwhile, Facebook will have to work to prevent the app from beinh abused. Most importantly, it needs to figure out how to make sure underage minors aren’t slipping into the app. They might be more vulnerable to coercion by cash, and less aware of the consequences of sharing their data.

I tried using Viewpoints but wasn’t invited to the well-being study or any other opportunities, so I couldn’t earn any money or try it out further as som studies are open only to people in certain locations or demographics. For now you have to log in with a Facebook account but it showed greyed out options for Google, phone, and email login that Facebook says are coming soon. Payments can take up to 10 days to process and your points expire after 5 years. Facebook won’t post or publicly share any info you provide through the app.

The launch of Viewpoints comes after Facebook shut down its paid market surveillance program Research and its free VPN that collected users’ data Onavo in the wake of a TechCrunch investigation that found the company was paying teenagers for their data while breaking Apple’s rules about distributing employee-only apps outside of a company.

The social network relaunched its market research efforts under the name Study From Facebook in June with a commitment to not allowing kids access. But in the meantime, leaked court documents have shown that Facebook purposefully used market research collected from Onavo to find potential rivals to cut off from its data. Facebook is now under anti-trust investigations surrounding concerns that disadvantaging its competitors hurt consumer choice in social apps.

Facebook pays teens to install VPN that spies on them