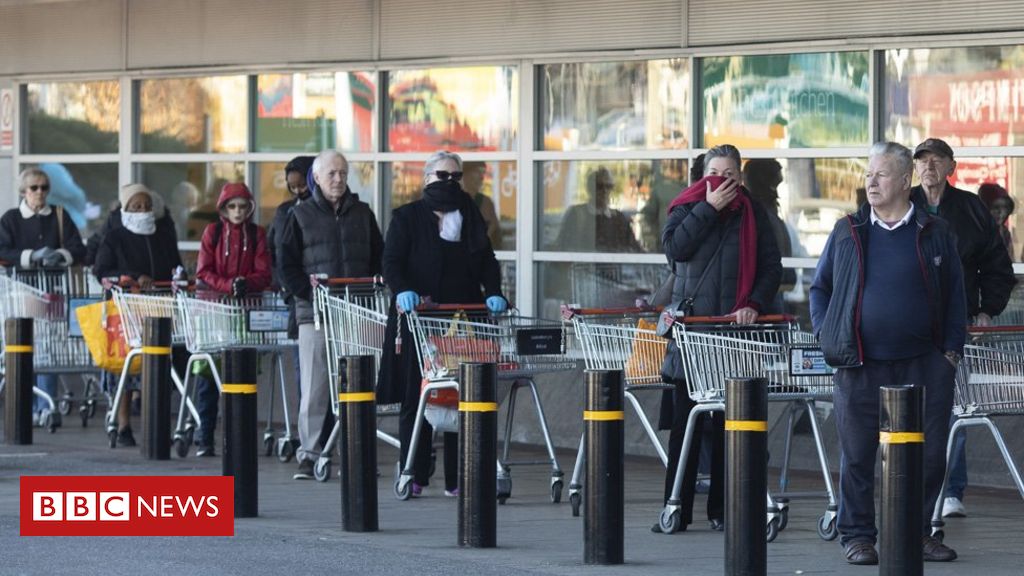 A cancer charity is urging the Scottish government and grocery stores to step up efforts to ensure the most vulnerable people in Scotland have access to online delivery slots.

Blood Cancer UK said delays in setting up a system “could cost lives”.

The Scottish government said it was working to ensure people were supported.

About 30,000 people in the most vulnerable “shielded” group have registered for priority deliveries.

In recent days supermarkets have been receiving batches of Scottish government data detailing those registering for the scheme.

Blood Cancer UK chief executive Gemma Peters said: “We fear that the time it is taking to give people at very high risk, priority for online deliveries could cost lives.

“We are now at the point where some people are being forced to choose between going hungry and making a trip to the supermarket that could be fatal if they pick up the coronavirus there.

“People with blood cancer are already scared about the virus and daunted by the prospect of spending so long without leaving their home. Not being able to get food is an extra worry they do not need.”

The system is running along different lines from that in England, where a single list of shielded people has been compiled, and the Scottish system has been slower to get started

Tesco and Sainsbury’s have begun offering delivery slots to some vulnerable customers, but of the five retailers involved in the scheme so far, most say few slots have been reserved.

Tesco said those in the “shielded” category should be able to see slots online that were reserved only for them. Others have not made distinct slots available.

Sainsbury’s said it had already sent out 10,000 offers to those who registered, but there was little evidence that delivery slots were available on anything like that scale.

Some retailers, including Asda and Waitrose, are emphasising the use of store cards allocated to voluntary helpers, who do shopping for those unable to get out of their homes.

‘Not received a letter’

Blood Cancer UK said the patients it represented were unable to get deliveries and were struggling to get food.

Its chief executive has written to the Deputy First Minister John Swinney calling on the Scottish government to take urgent action, as well as the chief executives of six major retailers.

The charity said “many people with blood cancer in Scotland still have not received a letter from their doctors saying that they are at a higher risk of serious illness or death than the general population if they get coronavirus”.

However, Nicola Sturgeon told a virtual First Minister’s Questions on Thursday that everyone regarded as “shielded” had now been notified, totalling 157,000 Scots.

In response to a question from Scottish Conservative leader Jackson Carlaw, Ms Sturgeon emphasised that the list was drawn up by medical experts.

Mr Carlaw has criticised the handling of the grocery delivery system and said: “The SNP dithered and eventually came up with a convoluted system, which hasn’t worked properly, and resulted in a pitiful number of shielded people receiving the help they need”.

Blood Cancer UK said about 10,000 people in Scotland have blood cancers such as leukaemia and lymphoma.

Going through treatment, they have very low immunity and natural protection against disease.

Others in the “shielded” category include people going through treatment for other forms of cancer, taking drugs that suppress immunity, organ transplant recipients, those with some lung or chest conditions or diseases, and some pregnant women with heart disease.

Those regarded as shielded should have received a letter, explaining precautions they should take for their health, along with pointers to advice and offers of help.

By sending a short text message to a given number, they can register to be kept in touch for the initial 12-week period they are to stay at home or have limited contact with those they live with.

Another code registers them for free weekly boxes of groceries. A further code, sent by text message, puts them on the list of people wanting priority access for supermarket home deliveries of groceries.

Tranches of data from that supermarket delivery list are in the process of being handed over to the five retailers now working with the Scottish government on the scheme.

Those companies, which already have one of these people registered as customer, are getting in touch by email to explain how they can access the service. However, that is no guarantee of a delivery slot. Not all retailers are reserving spaces for this group, or are able to through the software they use.

The Scottish government is being notified of those vulnerable people who have no previous record of ordering groceries for home delivery. However, it seems that list is still being prepared for one or several retailers to make approaches. The process has been delayed by concerns about data and privacy protection.

The Scottish government has set up a text message service to communicate with those in the shielded category.

More than 60,000 have so far been in touch to say they want to use it. Of them, 30,000 have taken up the offer of a free, weekly delivery of a box of food and household necessities, supplied by wholesaler Brakes.

A spokesman said: “We will continue to add to the central list to ensure people are supported to shield. If people have not received a letter but feel they should be in the shielding group, they should speak to their GP or specialist clinician.

“Our free-of-charge grocery packages have been delivered directly to doorsteps since 3 April. While not everyone who is shielding needs assistance with groceries, so far 60,000 people have registered for the shielding text message service, and over 30,000 people have signed up for these regular box deliveries.

“We are also working with the main supermarkets so that they can prioritise delivery slots for those who are shielding.”