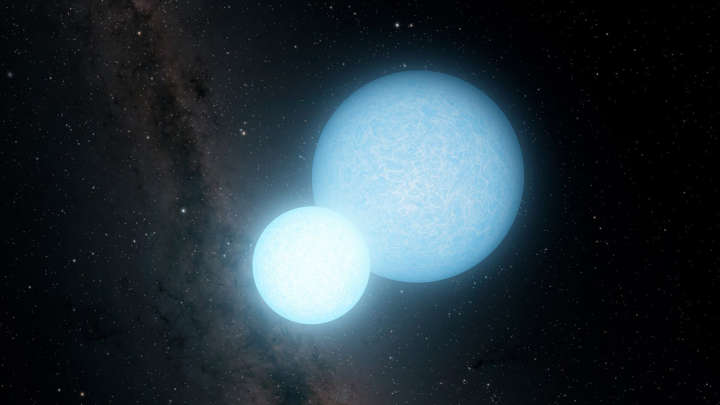 Astronomers at the University of Sheffield in the UK have discovered a peculiar binary system, where two white dwarfs – the spent cores of stars once like the Sun – are orbiting each other. The pair of stars is an eclipsing binary, meaning they regularly pass in front of one another when viewed from Earth. On top of that, one of them is pulsating.

This configuration, which has never been seen before, will allow for a detailed study of white dwarfs and their composition. Thanks to the uniqueness of the system, as reported in Nature Astronomy, the team was able to estimate the mass and radius of the two objects with exquisite precision.

“This pulsating white dwarf we discovered is extremely important since we can use the binary motion and the eclipse to independently measure the mass and radius of this white dwarf, which helps us determine what it is made of,” lead author Dr Steven Parsons said in a statement. “Even more interestingly, the two stars in this binary system have interacted with each other in the past, transferring material back and forth between them. We can see how this binary evolution has affected the internal structure of the white dwarf, something that we’ve not been able to do before for these kinds of binary systems.”

Astronomers have developed many techniques to study distant stars. In an eclipsing binary, they use the changes in the lights of the two stars to probe its properties. Pulsations are instead the realm of asteroseismology, which uses the motion of soundwaves through a star to study its interior. Since the system has both of these characteristics, the team has garnered incredible insights into the white dwarfs.

The team describe the pulsating white dwarf as a benchmark for future investigation. While most white dwarfs are made of carbon and oxygen, this particular one is rich in helium. This fact implies, according to the scientists, that its evolution was cut short by its companion.

“Determining what a white dwarf is made of is not straightforward because these objects have about half of the mass of the Sun, packed into something about the size of the Earth,” Parsons explained. “This means that gravity is extremely strong on a white dwarf, around one million times larger than here on Earth, so on the surface of a white dwarf an average person would weigh about 60,000,000kg. The gravity causes all of the heavy elements in the white dwarf to sink to the centre, leaving only the lightest elements at the surface and so the true composition of it remains hidden underneath.”

The team will continue to observe this object using the HiPERCAM instrument and the Hubble Space Telescope.