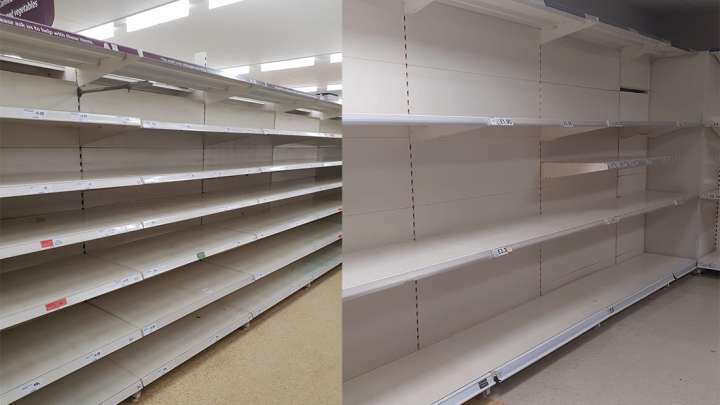 You’ve probably gone to a store, headed to the toilet paper aisle, and found empty shelves where once your favorite toilet roll sat, patiently waiting for you to come by and take it to a nice home, where you will promptly use it to clean your butt.

If not, I’m sure you’ve seen reports of people fighting other people for toilet paper in shops.

It turns out, all that stands between normal society and people fighting each other for something to wipe their bum on is a virus. Pretty grim.

It’s also a strange thing to fight over in terms of supplies. While hand sanitizers are running out even though soap will effectively wash away the virus, it’s at least a logical thing that people might want to stockpile in case of quarantine. Same for food. Meanwhile, the virus causes no gastrointestinal symptoms. Even if you get the virus, you will be pooping normally. You can’t eat it, and the virus won’t cause you to need more of it, so why are people feeling the need to stockpile toilet paper specifically?

A few experts have weighed in.

“My suspicion is that it is to do with how people react to stress: they want an element of comfort and security,” Brian Cook, the Community Engagement for Disaster Risk Reduction project, University of Melbourne, told the World Economic Forum. “For many Westerners there is a ‘yuck factor’ associated with non-toilet paper cleaning,” he added, noting there’s also a practical element to it as well, in that people imagine they’ll need it if they’re ill, like when they get flu.

“Stocking up on toilet paper is also a relatively cheap action, and people like to think that they are ‘doing something’ when they feel at risk.”

“There are a few factors at play here,” Alex Russell from the School of Health, Medical and Applied Sciences, Central Queensland University, weighed in. “People aren’t only stockpiling toilet paper. All sorts of items are sold out, like face masks and hand sanitiser. Things like canned goods and other non-perishable foods are also selling well. People are scared, and they’re bunkering down. They’re buying what they need and one of the items is toilet paper.”

The problem then becomes self-sustaining, as when people see what other people are stockpiling, they feel the need to get the same, or to get it before it’s all gone.

“I think we’re noticing the toilet paper more than the other things because toilet paper packs are big items that take up a lot of shelf space. Seeing a small product sold out at the supermarket (such as hand sanitiser) is not that unusual, and it’s only a small hole in the shelf that is often temporarily filled with nearby products,” said Russell.

“A second reason we might be noticing it more is because there aren’t easy substitutions. If the supermarket is out of a particular ingredient for dinner, you can just get something else, or an entirely different dinner,” said Russell. “But if there’s not a roll of toilet paper, then that’s pretty frustrating for everyone. Sure, tissues or paper towels, but it’s not quite the same, is it?”

If you want to feel ready, but don’t want to cause problems for others (we are all facing this together), click here to see what the US Department of Homeland Security recommends Americans do.

In short, there is no need to hoard toilet roll like you’re about to be pooping every hour on the hour until New Year with no access to shops.