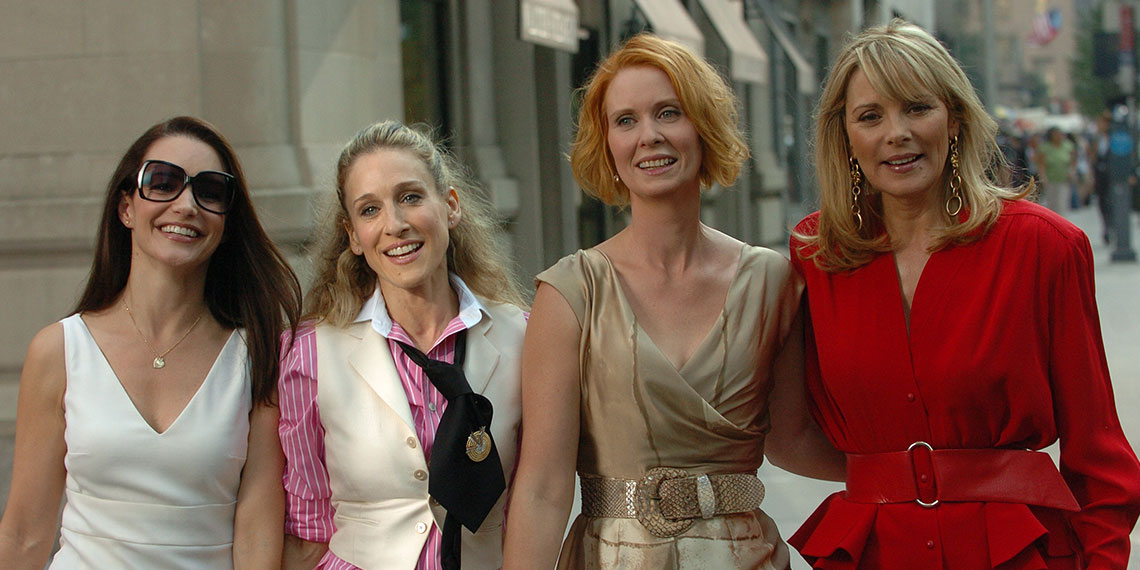 One good thing to come of this shelter-in-place situation is the much-needed excuse to catch up with my favorite and insane group of women. That’s right, the iconic foursome otherwise known as “omg, which one are you?” is back in my life after more than a decade and, now that I am old enough to understand what’s going on, better than ever! Sex and the City was the Gossip Girl of the nineties, which makes sense considering both shows have ridiculous plot lines that make no sense, absurd apartments that I’m pretty sure don’t exist in New York and, of course, superb fashion, which we can blame on none other than Eric Damon, costume designer of both SATC and GG.

Look, before I get into it, I just want to say that after wearing nothing but leggings and sweatshirts for the past three weeks, I admire the bold choices our boy Eric has made. However, after binging the whole series in an embarrassingly short period, I have seen… a lot. I can’t unsee some of these outfits and I feel the need to share them with you. Full disclosure, lot of the train wrecks are Carrie’s, which is to be expected, but that’s not to say the other characters’ wardrobes are much better. Here we go!

Guys!! What in the actual f*ck is this? If I had to write this article from memory (and not with the help of the amazing Instagram account @everyoutfitonsatc), I would still very much include this horrible look. There’s so much going on with this offensively busy jumpsuit that I don’t even know where to start. I admire the confidence it must take to wear this, but, like, no. She looks like a Bratz doll that never made it into stores because she’s just too much and the manufacturers were at a loss on how to tone her down.

TO BELT OR NOT TO BELT 💕Behold! This is the Sistine Chapel of wacky Carrie looks. Love it or hate it, you cannot unsee this outfit. There are so many interesting elements at play. Firstly, a pink button-down shirt that was cut along the bustline by the wardrobe department, then layered over a knotted white undershirt. Then there’s the palm-print midi-skirt, the oversize knit clutch, and last but certainly not least: the green checkered belt, worn over SJP’s extremely toned abs. Oh, and did we mention that she’s wearing a sculptural headpiece that strongly resembles a tumbleweed? Say what you want, but we will defend this outfit until the day we die. Although we could have used a scene where Samantha says, “Honey, what the fuck are you wearing?” (S4/EP15) #CarrieBradshaw #AvantGarde #Belted #Conceptual #GOAT

This is another outfit I would have included from memory. Tbh, I loved this midi skirt when I first saw it in 2002 and I still love it almost two decades later. The rest of this outfit, though, is an actual mess. First, what are the mechanics involved in tucking a button-down into itself without it being bulky af, and how did she manage to do the same tuck of the white tank under it? What purpose is this belt serving aside from assaulting my eyes?  I need answers, Eric! Aside from this skirt, the only good thing about this look are SJP’s abs.

TO HERMÈS, OR NOT TO HERMÈS? | As I strolled down Madison Avenue in my deconstructed Imitation of Christ prom dress, I couldn’t help but wonder….what the fuck is with my Hermès headscarf? Is it competing too much with my Chanel boutonniere? Or is competing in a good way? And when it comes to accessories, how do we know when enough is enough? (S4/EP11) #CarrieBradshaw #ScarfMoment #EightiesMoment #ImitationofChrist #Hermès #Chanel #Overaccessorizing

I swear I wore this exact same dress when I went as a Sexy Wench for Halloween 2009. Tbh, the dress isn’t horrible (I’m biased, whatever), but the tragic accessories are really bringing it down. I mean, the boutonniere, chain, and silk scarf are too much. Spe

aking of which, could no one be bothered to tuck the corner of her stupid scarf in? I wish she’d swap all of the stupid accessories for a simple tennis necklace and call it a day. As Heidi Klum would say, “auf wiedersehen,” honey.

Miranda is her truest self in outfits like this. The practical, uniform nature of menswear perfectly parallels her bullshit-free approach to living. We're also loving the severity of a fully-buttoned dress shirt on a woman (S2/EP6) #MirandaHobbes #Androgyny #DressLikeThePatriarchy #ImWithHerOutfit

Before anyone tries to drag me in the comments, let me just say that I love menswear-inspired looks on women. This unflattering disaster, however, isn’t inspired by men’s suiting because it is men’s suiting. This would look hot af if Miranda undid a few buttons (at least enough for her to breathe) and invested some of her “I went to Harvard” money on a tailored blazer. Her only appealing accessory is the martini.

My friend got me one of these dresses as a joke when we went to Oktoberfest in Munich a few years ago and even then, I wouldn’t wear it because it just looked too stupid. Why the hell, then, is Carrie wearing an actual dirndl in Central Park? The pigtails aren’t helping the situation. I literally can’t think of anything that would make this outfit better, so let’s all agree that it’s awful and move on.

Even though this chiffon top is allegedly Chanel, it’s heinous, just like the rest of the outfit. Each piece is ugly in its own right and together, they make for one really unfortunate look. Eric, explain yourself! The only thing I can focus on are the little chode designs on the top. Am I a 12-year-old boy or are those tiny penises that are wider than they are long? Seriously, tell me I’m wrong.

I like to think of myself as a progressive and open-minded fashion-lover, but I’ve always hated overalls. These, however, are especially abominable because they look like they’d even be a little loose on the Michelin Man. I remember this episode: Miranda is on a really unfortunate dry spell and, with each passing and sexless day, gets more and more restless. Miranda, honey, this enormous overalls-puffer combination isn’t helping your cause. For the love of God, put on literally anything else in your closet.

On a somber note, my dad recently battled (and won!) a tough war against cancer and watching him lose his hair was tough for everyone, so I get Samantha wanting to express at least some semblance of her glamorous self via wigs. An afro, though? Sam has been known to culturally appropriate on more than one occasion, so I’m not surprised that she actually wor