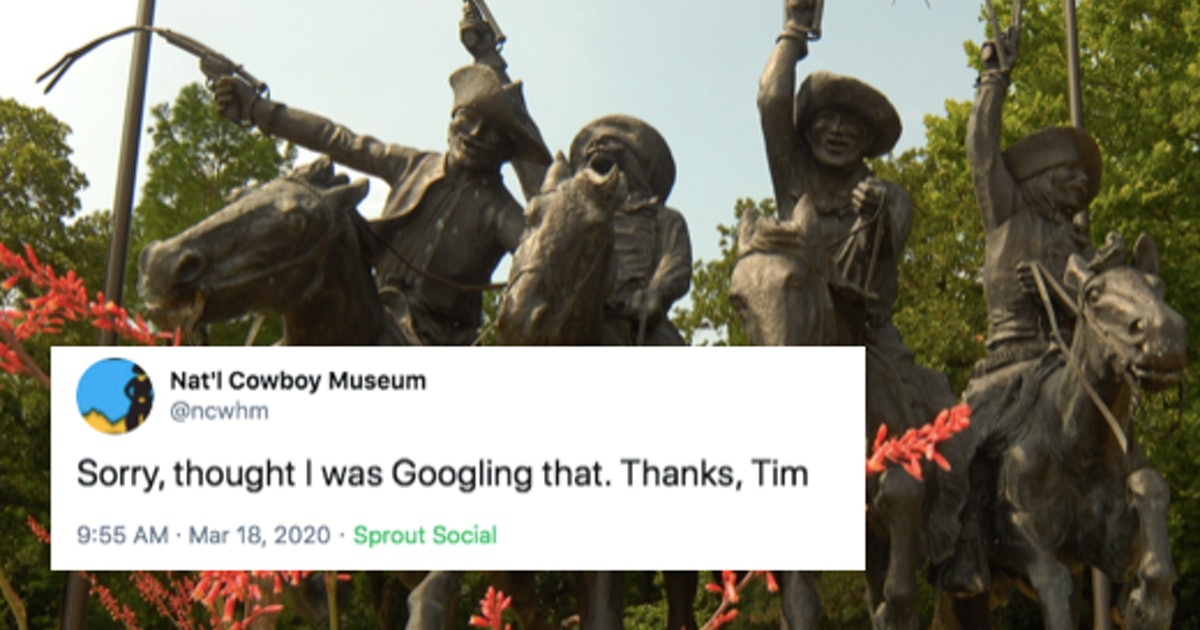 Many public places are temporarily closed in an effort to flatten the curve of the novel coronavirus, also known as COVID-19. Due to this, people are experiencing a change to their normal workflow. While some people are working from home rather than going to the office, a museum security guard was given an entirely new role in addition to his regular duties. Take a look at this security guard’s tweets from an Oklahoma Museum’s Twitter account to see exactly how he rose to the challenge.

On Tuesday, March 17, Oklahoma City’s National Cowboy and Western Heritage Museum (NCWHM) put Tim Send, the head of security at the museum, in charge of social media management because the museum closed to comply with the CDC’s guidelines for social distancing. He introduced himself on the official National Cowboy Museum’s twitter account, sharing that he’s “new to this but excited.” Tim mentioned his team will continue to protect and monitor the museum for the duration of its closure before writing, “Thanks, Tim Send,” which would become his signature sign-off.

From the get-go, you can see Send’s effort to post about the museum and its exibits and share his own excitement about them. However, since he’s not well-versed in social media, he’s needed a little bit of help. In one of Send’s first tweets, he mentions how Lucas, his grandson, told him to use hashtags in his posts, so he wrote out, “Hashtag John Wayne,” in his post, in which he lamented the fact he couldn’t try on Wayne’s wares.

Send posted a few tweets asking for help from the public, as well as if his grandson Lukas could read them. But he quickly figured out he wasn’t searching on Google and politely let his followers know.

Send has been giving daily updates. On Wednesday, March 18, he showed the world an exhibit about famous photographer Dorothea Lange, who Send thinks would be a “good person to have a beer with.” The next day, he tried to catch Woody and Jessie from running around like they do in the films.

Send has repeatedly tried to get his grandchildren’s attention via Twitter using his newfound skills, too:

On Thursday, March 19, Send realized he had been doing hashtags all wrong and adjusted his method to use the “pound sign from the phone,” writing #HashtagJohnWayne — and like a true gentleman, he thanked all his followers for the helpful tips. TBH, I think Send is starting a new trend to include the word “Hashtag” in your actual hashtags.

He also got advice on social media posts from Seth in marketing. At first, Send posted a picture of the actual selfie station when Seth asked for it, but then Send finally jumped in front of the camera and snapped the pic everyone was waiting for.

Send shared that Seth asked him to keep up with social media engagement by asking questions, but he made sure to clarify her is “very happily married to Tina.” LOL, Tim!

Apparently, Tina made Send watch recently, and he noticed one of the people in the Lange’s photographs bears a more-than-passing resemblance to Ryan Gosling. It looks like Send is also trying to get the museum trending with his #HashtagTheCowboy hashtag.

IMHO, Send is now the king of dad jokes:

Someone suggested Send post a TikTok. He took it to another level by sharing a photo of an alarm clock from 1951. Well played, Tim.

You do you, Cowboy Tim. From his mustache salutes to his #Hashtags, he’s definitely Twitter’s newest gem, and I’m not sure he needs any more help from Seth in marketing. In fact, the museum’s number of followers has increased since Send took it over.