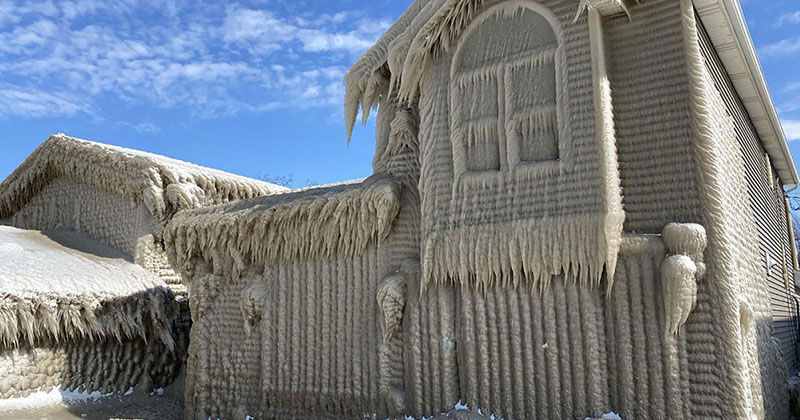 Gale force winds and frigid temperatures have encased a few unlucky homes in ice along the shores of Lake Erie. Residents on Hoover Beach’s South Shore Drive in Hamburg, New York, saw their houses turned into ice castles as the winds created huge waves, driving lake water up on the shore, while the sub-zero temperatures turned the splash into ice.

Resident Ed Mis told CNN his house was covered in several feet of ice while his backyard had about 12 feet of ice.

Beginning on February 27th and continuing for 48 hours, winds gusted over Lake Erie at speeds up to 60 mph (97 km/h). Around this time of year, ice cover is usually abundant on Lake Erie’s surface. That typically prevents the shoreline from being soaked with cold water during powerful storms; however, Lake Erie’s eastern end is nearly ice-free this year, leaving the shore vulnerable to spray from storm-whipped waves. [source]

News anchor John Kucko captured the chilly phenomenon in the videos above and photos below. Astute readers may have also noticed that other homes along the shore appear to have been entirely unaffected by the winds and waves.

Kucko explains that placing a large amount of boulders in front of your property can slow the momentum of waves/spray but that the endeavour is costly.