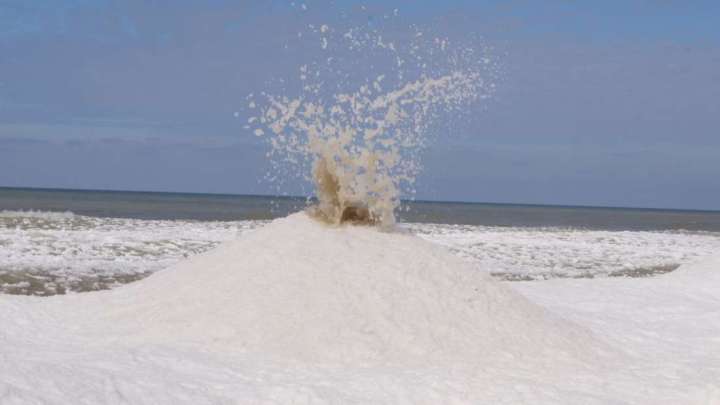 On the shores of the Great Lakes in North America, a truly peculiar phenomenon takes place. Given the right conditions – when waves hit ice gathered on the shore, for example – “ice volcanoes” can form, erupting water and slush through the frozen surface of a lake.

The National Weather Service of Grand Rapids posted a few photos and a video of the ice volcanoes erupting at Oval Beach on February 16. The feature might be unfamiliar to many but they are not a rare occurrence and have been studied in detail by researchers at Michigan Tech, who have collected data from the ice peculiarity on the (relatively) nearby Lake Superior, while other researchers have seen similar in Lake Erie.

The ice volcanoes form at the edge of the ice shelf, from the repeated interaction with the lake’s high surf. At first, ice begins to form on the surface of the lake. Small differences in height are over time amplified, with the waves breaking directly onto the ice shelf pushed by the strong onshore winds. That creates the wavy ice shelf.

Underneath the ice, waves continue to move and can move up through the cracks in the ice, eventually erupting at the top. This continues the build-up of ice into cone-shaped volcanoes. These can be quite small at just 1 meter in height (3 feet), but given the right conditions, they can get to 8 meters (25 feet) tall from base to peak.

To form these volcanoes you need high surf and low temperatures. You also have to have the right conditions on the lake bed, which allow for waves to swell and hit the leading edge of the thick ice shelf. Ice volcanoes can form singularly or in groups, usually arranged in arcs that follow the lakebed structure underneath.

Single cones have been spotted many times but never erupting, suggesting that their formation might be different from other ice volcanoes.