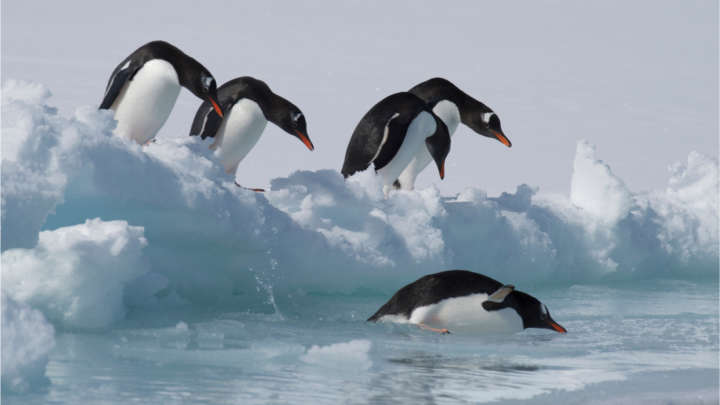 We’ve sailed the seas for many millennia, yet it’s only relatively recently that we’re learning of the life beneath our boats. Little is known about the underwater hearing of Antarctic gentoo penguins, a species well adapted to life both above and below Earth’s waters.

To explore the hearing of these peach-feet waddlers, a team of scientists from the University of Southern Denmark and the German Oceanographic Museum played noise to penguins in a pool enclosure at the Odense Zoo, Denmark between July and October, 2018. The sound was played to seven adult gentoo penguins in 500-millisecond bursts at levels between 100 and 120 dB re 1 μPa rms.

To make sure “surround-sound” was not happening, the team chose an irregular shaped pool that would not induce the ‘church-bell-like’ reverberations of more regularly shaped pools. They found that the penguins show a graded reaction to the noise, with no reaction at the 100 dB range to “strong reactions” in more than 60 percent of the playbacks at 120 dB.

“We expected the penguins to have some sort of underwater hearing abilities due to their very amphibious lifestyle, but it was surprising how strongly they reacted to these rather weak tones we played,” Kenneth Sørensen, corresponding author, from Syddansk Universitet, Denmark, told IFLScience.

The fact that penguins can detect and react to underwater noise suggests they make use of sound stimuli for orientation and prey detection. It also hints at the possibility that penguins are sensitive to anthropogenic noise, similar to whales.

The penguins’ adaptations are notable, as the speed of sound is nearly 4.5 times faster in water than in air. Such a challenge requires anatomical changes in the detection system of a creature in order to function well below and above the seas. The high speed of sound underwater makes it tough to determine the direction of a source compared to air, where directional hearing is often achieved by the time lag and intensity difference between the sound pulse received by the two ears. Underwater, there are shorter times lags and longer wavelengths, making it more challenging to pinpoint noise.

“From our findings, we can only assume that penguins have a hearing sensitivity close to, or maybe even better, than the great cormorant,” added Sørensen. “Penguins do longer and deeper foraging dives and we expect their sensory system to be adjusted as such, but it is difficult to tell which bird is more sensitive as we compare two different measures. We can, however, safely conclude that both penguins and cormorants have hearing specializations that are adapted to the underwater environment.”

The startle response of the penguins suggests they react to the sounds out of fear rather than curiosity, note the team. This makes evolutionary sense as penguins are preyed upon by predators such as orcas and seals, some of which make sounds of similar duration and bandwidth to those used in the trials.

“Our next goal is to quantify their directional hearing abilities under water,” said Sørensen. “This helps us understand how penguins actually use acoustic cues underwater, as the ability to pinpoint the direction of a sound source is a fundamental property of essentially any animal hearing system for predator avoidance, foraging, conspecific communication etc.”