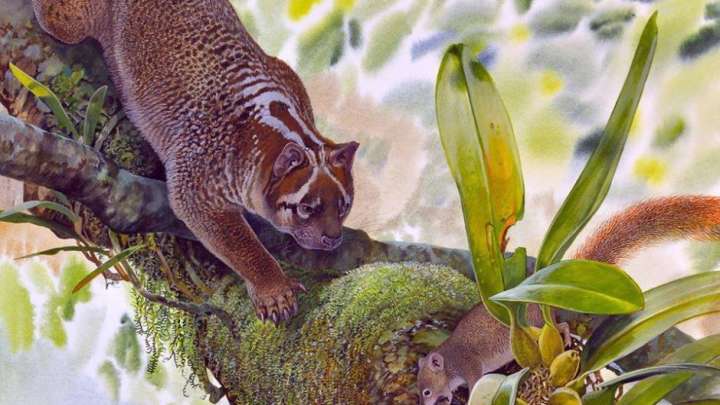 Long before the time of humans, this small but deadly marsupial lion raised hell in the ancient rainforests of Australia. Some 24 million years later, researchers have taken a second look at fossilized remains of this unusual marsupial lion and discovered it actually belongs to a never-before-seen genus of animals.

The remains of the marsupial lion were first discovered in the late 1980s at the Riversleigh World Heritage Area in Queensland and were initially believed to belong to a carnivorous marsupial, Priscileo roskellyae. Reporting in the Journal of Vertebrate Paleontology, researchers from the University of New South Wales have recently reevaluated the shape and structures of the beast’s teeth and lower jaw to find that it actually belonged to a new genus of marsupial lion, Lekaneleo roskellyae, nicknamed Leo.

“As we found more and better specimens at Riversleigh, we began to realize it didn’t belong to that group at all. It was a new kind of marsupial that hadn’t been seen before. It was a different branch on the marsupial lion family tree,” study author Michael Archer, professor of biological, earth, and environmental science at the University of New South Wales, told CNN.

Despite its name, the animal is not closely related to lions. In fact, the genus doesn’t have any close relatives alive on Earth today, so it’s tough to truly understand how Leo might have behaved. However, it does possess some stand-out features that provide some strong hints of how the species might have coped with the massively complex ecosystem of Australia’s ancient forests.

“In Australia, the marsupial lions were the supremely specialised carnivores throughout at least the last 30 million years of Australian history,” Archer told ABC News.

It was armed with razor-shape teeth, which the researchers compare to mini bolt-cutters. Although no larger than a domestic cat, the lion is thought to have been a sneaky and fierce predator of small animals during the Oligocene–Miocene of Australia, living among the area’s trees and hunting small mammals, snakes, and reptiles.

“They had an extraordinary, elongated, bolt-cutting type of premolar,” Archer told ABC News. “This was the most extraordinary adaptation or evolution that a carnivorous mammal has ever developed anywhere in the world. It is capable of slicing straight through bones.”

Australasia and the Americas are the sole kingdoms of marsupials, a peculiar bunch of mammals that give birth to underdeveloped young that continue to grow in the mother’s pouch. Some of their most famous members include kangaroos, wallabies, and koalas.

The new member of this gang is part of the same family as the thylacine, aka the Tasmanian tiger. This species was the only member of the Thylacinidae family to survive into modern times, however, it plunged into extinction over 80 years ago when the last living individual died at a Washington DC zoo in 1936.