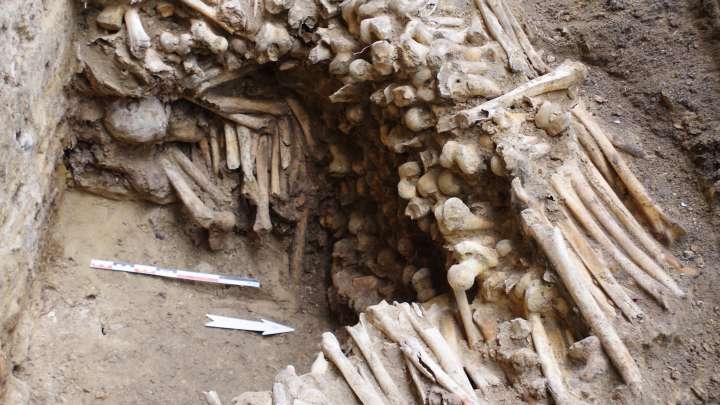 An 11-month excavation around Saint Bavo Cathedral in Belgium has revealed nine walls constructed from thousands of human bones centuries ago.

Each of the “bone-walls” is mainly made of thigh and shin bones belonging to adults, with the space between containing the shattered fragments of skulls. IFLScience spoke with lead researcher Janiek De Gryse who says the structures were likely built to serve as overflow from the church’s cemetery from the middle of the 12th-century until 1784. The discovery is a unique find for the area surrounding Flanders, Belgium.

“On archaeologically examined graveyards we often see large pits [or] layers with lots of loose human bones, from clearing older graves, but we have never seen structures like walls, which are intentionally built with human bones,” said De Gryse.

During medieval times, older human remains were exhumed and relocated to make room for the newly deceased. When clearing these graves, caretakers were more likely to collect large bones and skulls, leaving behind smaller, more fragile bones like vertebrae, ribs, and bones from hands and feet.

“Given that the faithful believed in a resurrection of the body, the bones were considered the most important part. That is why stone houses were sometimes built against the walls of city graveyards to house skulls and the long bones in what is called an ossuary,” said De Gryse.

Radiocarbon dating indicates that most of the bone material is from the second half of the 15th-century; however, church documents record two excavations of the cemetery during the first half of the 16th-century and again after 1785 when the cemetery was no longer in use. Men and women of all ages were represented in the findings, yet there are hardly any bones that belong to children or young adults, which conflicts with the life expectancy from the period but follows with the practice of clearing only large bones from graves.

“In the case of the ‘bone-walls’ of Ghent, there is an extra dimension to it. The bones from the upper limbs are absent; the walls consist only of bones from the lower limbs,” researcher Janiek De Gryse told IFLScience. “At the moment we are still examining which idea caused this. Is it only a practical thing (piling up bones in a very compact way) or is there also a religious [or] spiritual dimension?”

Similar structures exist throughout Europe. Below Paris, an underground five-story-tall maze known as the Catacombs contains the remains of millions of Parisians over an area of 11,000 square meters (118,400 square feet). Similarly, dozens of chapels across Eastern Europe have been built from the bones of the dead.

The research team is collaborating with the University of Ghent to release a detailed inventory of the bones later this year.