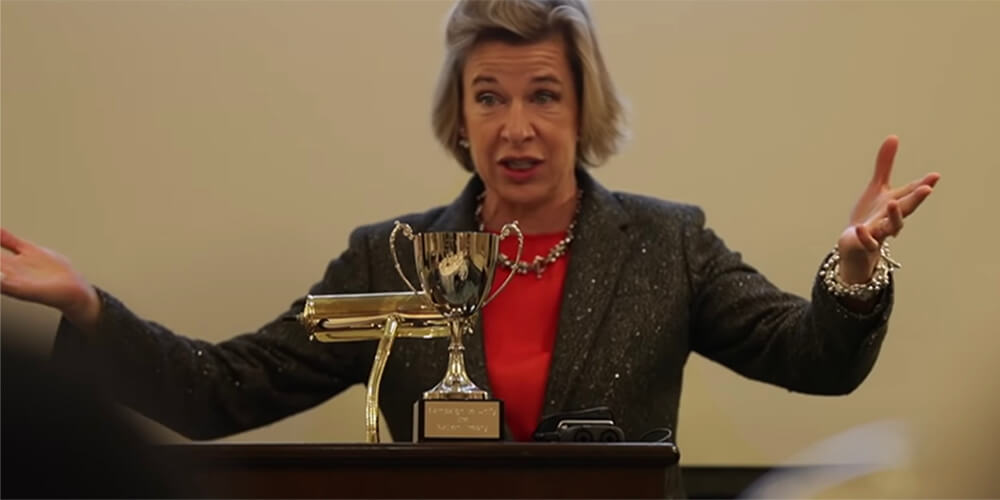 Katie Hopkins, a controversial far-right British commentator who calls herself a minority white and is known for her racist commentary, accepted a CUNT award in a prank set up by YouTuber Josh Pieters.

Pieters, who has 1.24 million followers on YouTube, released a video on his channel on Thursday titled I Flew Katie Hopkins to Prague to Win a Fake Award.

Pieters lists homophobic, fatphobic, classist and other problematic comments shes made about anyone who is not rich and white. Despite her charming views, one million Twitter followers, and friendship with Donald Trump, Katie hasnt won many awards, he explains.

So we thought it would be nice to give her one, he continues, with the image of an award that reads Campaign to Unify the Nation Trophy. The abbreviation of the award reads CUNT.

He then details the elaborate set-up, which began three months ago when they put up a fake website called The Cape Town Collective of Freedom of Speech.

The chairman and leaders are made up of characters based on photos of Pieters dad, the leader of the Klu Klux Klan, and the woman who makes announcements on the London Underground.

A screenshot of an email sent to Hopkins shared in the video shows Leslie Peters wrote to Hopkins on Dec. 18, 2019.

Im emailing as our committee has decided to award you the equivalent of our Lifetime Achievement Award The Campaign to Unify the Nation Trophy for the simply excellent work you have achieved over the past few years, the email says.Your work has been an inspiration to all of us who care about Freedom of Speech, and we would be delighted if you would accept.

Hopkins was apparently delighted and even overly enthusiastic in helping connect this supposed organization to her own network.She offered her schedule toward end of January and said she would organize logistics.

The game was on, Pieters says in the video.

The event was in a conference room of a Four Seasons Hotel.After prepping some locals who were hired to be present in the room as members or guests, Pieters gave a speech on behalf of his father, whose character had emailed Hopkins but was unavailable for the award.

He then introduced her as an inspiration to everyone in the room.

As Katie came up to collect her fake award, we had one more surprise in store, Pieters said in his narration of the video.

It showed Hopkins receiving the award from him while the abbreviation of the award C.U.N.T appeared on the background screen.

We had succeeded! Pieters said cheerfully in his narration of the video. We made Katie Hopkins fly 1,600 miles to pick up a fake award and put the word CUNT behind her without her noticing.

He said while some might think its mean (and he considered it for a bit as well), her acceptance speech reassured him this was totally appropriate for a racist.

She then went on to say that epileptics are all weirdos, theyre all up there with the Asians and if you call Mohammad in a school playground in the U.K., 2,000 fucking kids come running, and you dont want any of them.

She also accused Muslims raping of their own mothers and made fun of Greta Thunberg, the 17-year-old climate activist.

On Thursday, Hopkins Twitter account was suspended for abuse and harassment that was unrelated to the award.

Keeping Twitter safe is a top priority for us abuse and harassment have no place on the service, Twitter said in a statement to the Daily Dot. We take enforcement action against any account that is violative of our rules which includes violations of our hateful conduct policy and abusive behaviour policy. These rules apply to everyone using our service regardless of the account involved.

Pieters did not immediately respond to the Daily Dots request for comments. He said at the end of the video, Theres an awful lot of hate in this world and people like Katie Hopkins spread that hate and make money from it. And she can do that because she has freedom of speech, but so do I So I used it to combat her spreading of hatred by playing on her ego and making her look a little bit silly.

The video received more than 1.3 million views by Friday morning.

The Daily Dot has reached out to Hopkins for comment.