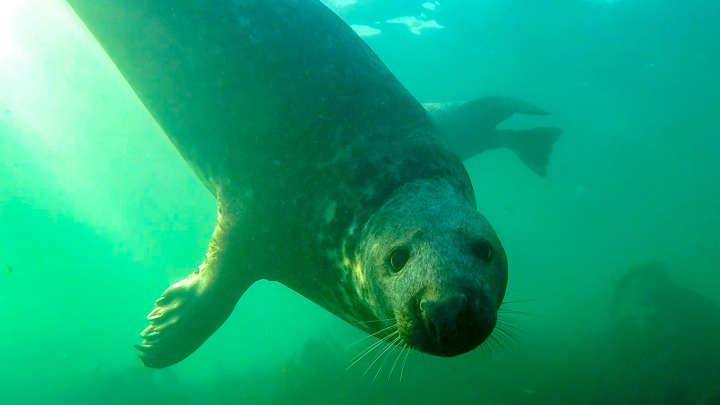 For decades divers and underwater microphones have picked up loud but rare cracking sounds from grey seals during mating season. Seventeen years ago, Dr Ben Burville was astonished to observe the sound came not from the seals’ throats, as everyone thought, but from their front flippers clapping together while underwater. Now, after years of effort, Burville has caught the moment on film, revealing a form of communication never previously reported in a marine mammal.

Burville is a medical doctor who has a hobby of swimming with seals, rather than a full-time zoological researcher. The footage he has collected over years of gaining the seals’ trust is unmatched. He is now teaming up with zoologists from Australia’s Monash University to study and describe the behavior he has filmed.

Dr David Hocking describes astonishment on seeing Burville’s clapping footage. “We thought ‘can you even clap underwater?’” Hocking told IFLScience. How could the sound be that loud with no air to compress, Hocking wondered. The water would provide an obstacle preventing bringing the flippers together at speed.

There was nothing for it but for Hocking, colleagues, and students to visit a local swimming pool to attempt to clap underwater themselves. “We found it is quite easy to do,” Hocking said. The sound cannot be heard above the surface, but Hocking subsequently took his young children to swimming lessons and learned human hands can clap loud enough underwater to be heard at the opposite end of a heavily used pool. Living in the water almost full time, it is not surprising grey seals have learned to make their claps resonate.

Reporting in Marine Mammal Science, Hocking and Burville document this behavior for the first time, proposing males clap to scare off rivals and attract mates. “Think of a chest-beating male gorilla, for example. Like seal claps, those chest beats carry two messages: I am strong, stay away; and I am strong, my genes are good,” Hocking said in a statement.

Besides the fact that only males have been observed clapping, and only during mating season, Hocking told IFLScience the most likely alternative theory, that the claps warn off predators, doesn’t fit observations. Gorillas and chimpanzees clap to warn of danger, but “the seal in the video is relaxed,” Hocking said.

Marine parks have famously trained seals to clap as part of shows, but Hocking explained these are usually fur seals or sea lions, whose large front flippers look more impressive clapping than “the T.rexes of the seal world,” as he calls grey seals.

Sea lions’ larger front flippers make them better swimmers than true seals, but reduce their adaptability. Hocking has previously shown grey seals use their flippers’ claws to hold and tear their prey, and it appears this flexibility has been adapted to another use.