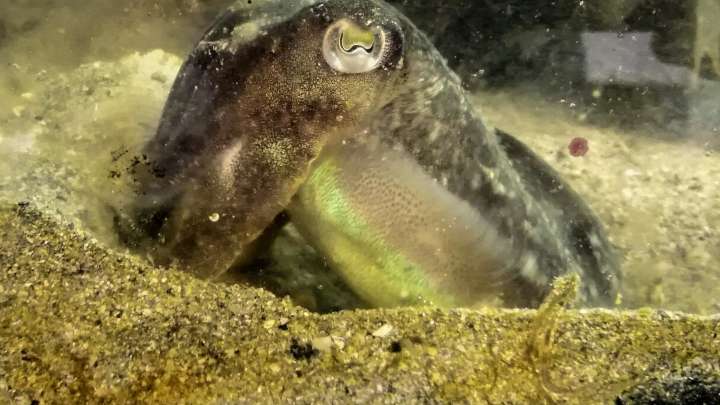 Ever find yourself eating less for dinner because you’re saving yourself for dessert? These cuttlefish feel that. In a recent study featured in the journal Biology Letters, European common cuttlefish (Sepia officinalis) were found to eat fewer crabs for lunch if they suspected they’d be getting shrimp for dinner. But before I explain how or, perhaps more pertinently, why scientists felt the need to study this, first let’s have a little chat about cuttlefish and shrimp.

In the wild, cuttlefish have quite a generalized diet including crab, fish, squid, and shrimp. However, they’ve been known to be quite the foodies, exhibiting strong food preferences that have revealed they absolutely love shrimp. It’s the pollen to their bee, the honey to their badger, their cuttlenip, if you will.

To test how consistent this preference was, researchers dropped crab and shrimp at an equal distance from a hungry cuttlefish to see which snack they’d choose. They tested this on 29 cuttlefish, five times a day for five days, and every single one showed a preference for shrimp. Shrimp were even the stars of a recent movie formulated to capture cuttlefishes’ attention while researchers studied the effects of 3D glasses on their vision. Indeed, there might only be one person who loves shrimp more than a cuttlefish.

The foraging behaviors of cuttlefish can be split into two categories, selective or opportunistic. When the test subjects of this study were reliably served one shrimp every evening they would eat far fewer crabs during the day, but when shrimp was only occasionally on the menu, the cuttlefish would fill up on crabs. This change in behavior shows that when the cuttlefish learned to expect shrimp, they ate selectively, consuming fewer crabs with their evening meal in mind, whereas when they were not expecting shrimp they would opportunistically gorge on whatever food was provided.

“It was surprising to see how quickly the cuttlefish adapted their eating behavior – in only a few days they learned whether there was likely to be shrimp in the evening or not,” said Pauline Billard, a PhD student in the University of Cambridge’s Department of Psychology and Unicaen in France, in a statement. “This is a very complex behavior and is only possible because they have a sophisticated brain.”

By quickly adapting their feeding strategies to match their dietary preferences based on the foods available to them, the cuttlefish perfected their foraging approach so that they didn’t just eat enough food, but so they ate more of the foods they liked the most. This response to memories based on information about their resources demonstrates the amazing cognitive capabilities of cuttlefish, who hatch with an established central nervous system that allows them to learn from a young age.

Despite belonging to the class Cephalopoda, cuttlefish share a remarkably similar central nervous system structure with vertebrates, which is surprising considering the two diverged from the evolutionary tree around 550 million years ago, and herein lies the value of the study: “This flexible foraging strategy shows that cuttlefish can adapt quickly to changes in their environment using previous experience,” said Professor Nicola Clayton, of the University of Cambridge’s Department of Psychology, in a recent statement. “This discovery could provide a valuable insight into the evolutionary origins of such complex cognitive ability.”