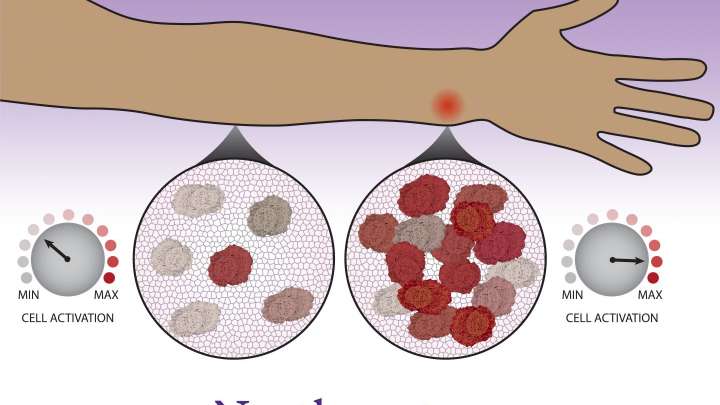 When humans have important decisions to make, we often ask those around us for advice. Our own immune cells have adopted something similar, consulting before reaching a collective decision on the appropriate level of threat response. Understanding this vital, and remarkably complex, process could inspire treatments for cases where it goes wrong.

The swelling and pain we experience during an infection are partially caused by immune cells migrating to the site to destroy the invaders. Knowing when, and how much, to respond is crucial to the body’s capacity to function – if the reaction to a few bacteria arriving through a mild scratch was the same as to a life-threatening wound, we’d never get anything done. Defense forces that overreact or turn on those they are supposed to protect can be especially deadly, as many nations have discovered to their cost, and immune systems are no exception.

Individual immune cells don’t make this decision in isolation, but instead check on the alert level of others, Professor Joshua Leonard of Northwestern University reported in Nature Communications.

“This is a previously unrecognized aspect of immune function,” Leonard said in a statement. “The cells make a coordinated decision. They don’t uniformly activate but instead collectively decide how many cells will activate, so that together, the system can fend off a threat without dangerously overreacting.”

Macrophages, the immune system’s first responders, detect chemicals called lipopolysaccharides (LPS) produced by bacteria to hunt out threats. Upon LPS detection, macrophages undergo a series of steps that lead them to release molecules of their own, including tumor necrosis factor (TNF).

Leonard tracked the behavior of individual macrophages when in different chemical environments, and found their course of action was determined not only by LPS levels but by the TNF produced by surrounding immune cells.

The system is particularly sophisticated because, in order to work, macrophages need to know how many neighbors they have. A middling dose of TNF might indicate a small number of neighbors, all on high alert, or a much larger number where only some sense a danger. The two scenarios call for very different responses. To distinguish between the two, Leonard showed that macrophages have a memory of their fellow immune cells’ density prior to the LPS detection.

The process has some commonality, the paper notes, to “quorum sensing”, in which bacteria detect molecules released by others to determine whether their numbers are sufficient to perform activities such as forming biofilms.

Leonard and his team argue cells must use unknown mediators to determine the earlier density of their fellow macrophages. If these can be identified, they could be targets for the treatment of autoimmune diseases, where the body’s immune system sees its own organs as threats to be attacked.