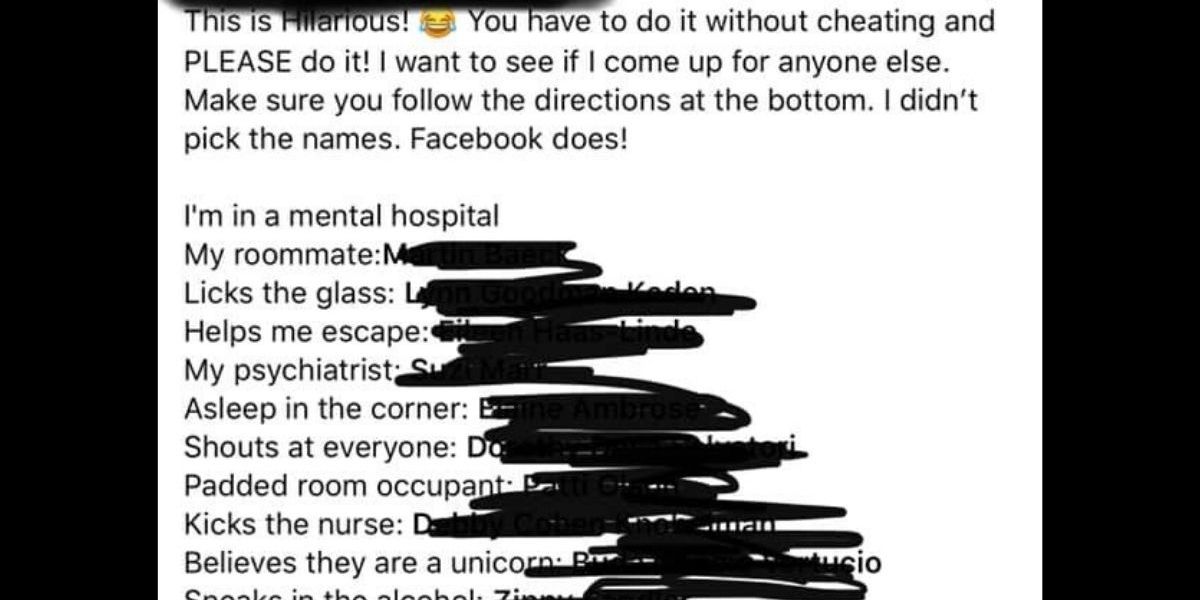 People love Facebook posts that invite them to create silly lists of their friends and family members, and most of the time, it’s all in good fun. But a “mental hospital” post that keeps circulating is nowhere near good fun, and it needs to go away, now.

“I’m in a mental hospital

Asleep in the corner:

Believes they are a unicorn:

Sneaks in the alcohol:

The end of the post I saw read, “That was fun!” and “Sometimes you need some mindless humor!”

This post is mindless, but it definitely shouldn’t be considered humor.

For anyone who struggles with mental illness or who has loved ones who do, this post is hurtful, not humorous. It portrays problematic ideas about people who are mentally ill and makes light of a serious issue that millions of people face. Being in a mental hospital isn’t a joke or something to make light of—it may actually be a life-saving move for some people, and posts like this just reinforce harmful stigmas about mental illness that keep people from getting seeking the treatment they need.

RELATED: A huge thanks to those who openly share their mental illnesses. You saved my daughter.

Jen Simon, a writer who has written extensively about mental health issues, shared the screenshot of the post on Facebook with names crossed out. “This is not hilarious,” she wrote. Simon lost her sister to chronic depression in 2018, after her years-long battle with mental health ended in suicide.

If you don’t see how the Facebook post is distasteful on its face, look at it through the eyes of someone who has lost a loved one to mental illness. So painful. But when Simon raised her concerns with the post, she was admonished by the woman who had shared it and “told not to take it personally” because she hadn’t even been tagged in it.

“It made me think of the scene in You’ve Got Mail,” says Simon, “when Tom Hanks said, ‘It’s not personal,’ and Meg Ryan replies, ‘It’s not personal to YOU—it is to me.’ The rest of my life will be defined by the shadow of metal illness and suicide. Regardless of the author’s intent, for those of us who suffer or watch our loved ones suffer, it sure as hell feels personal.”

Kimberly Zapata, founder of Greater Than Illness, a non-profit organization that aims to empower children and youth struggling with mental illness, found the post infuriating. She says that instead of making jokes about mental illness, we should be talking about how we can improve mental health.

“The problem with remarks and ‘jokes’ like this is not only that they perpetuate negative—and in many cases, untrue—stereotypes. It is that these stereotypes often keep people from getting help,” says Zapata. “For example, no one wants to be seen as the ‘crazy’ person screaming and mumbling incoherent obscenities in the corner.”

“What’s more,” she adds, “these stereotypes convince people that mental illness has a ‘look,’ and if one does not fit into the so-called mold, they are not really sick — and that is just as dangerous, as many ignore or disregard their symptoms because they are not ‘that bad.'”

RELATED: States are starting to require mental health classes for all students. It’s about dang time.

We have come pretty far in reducing the stigma surrounding mental illness, and posts like this send us backwards. When we know better, we do better—and we need to do better than share things that cause harm because we don’t see the problem and think it’s “all in good fun.”

There are times and places for finding humor in mental health struggles, such as when people with anxiety or OCD joke and laugh together over their shared experiences. But such humor should take place within a supportive community, not come from outside in a way that pokes fun or dismisses or pushes stereotypes. That kind of joking spreads harm to people who are already dealing with enough, which is why we need to stop circulating these kinds of posts immediately.