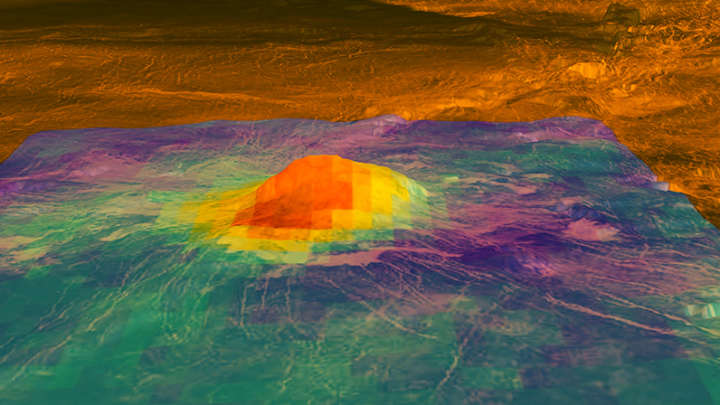 Venus is often seen as Earth’s hellish twin, being only slightly smaller than our planet but covered in a toxic acid atmosphere hot enough to melt lead. A new study has found hints of a new similarity between the two planets; Venus might still have active volcanos.

Previous observations of Venus have revealed lava flows on the surface of the planet less than 2.5 million years old. The new paper, published in Science Advances, argues that some of that lava is at most a few years old.

The claim comes from laboratory simulations of how lava would interact with the dense Venusian air, which has a pressure of 90 atmospheres and is mostly composed of carbon dioxide. The team showed that the lava would be altered quickly in those conditions. Therefore, the presence of minerals such as olivine suggests that the deposits formed within the last few years rather than hundreds of thousands of years ago.

“If Venus is indeed active today, it would make a great place to visit to better understand the interiors of planets,” lead author Dr Justin Filiberto, Universities Space Research Association (USRA) staff scientist at the Lunar and Planetary Institute (LPI), said in a statement. “For example, we could study how planets cool and why the Earth and Venus have active volcanism, but Mars does not. Future missions should be able to see these flows and changes in the surface and provide concrete evidence of its activity.”

In their experiment, olivine becomes covered by iron oxide minerals such as magnetite and hematite in a matter of weeks. The study combined the team’s lab data with observations from the European probe Venus Express, which orbited the planet until 2014.

Confirming the findings might not be an easy task. Venus’ thick cloud cover doesn’t allow for unimpeded observations from orbit, so we can’t simply see a volcano erupting. Therefore, crafts have to use infrared instruments to detect increases in temperature on the already-scorching Venusian surface. The Akatsuki spacecraft currently orbiting Venus used to have an instrument dedicated to that kind of observation but it no longer works.

So, are Earth and Jupiter’s moon Io the only volcanically active worlds of the Solar System? Future missions could hold the answer.