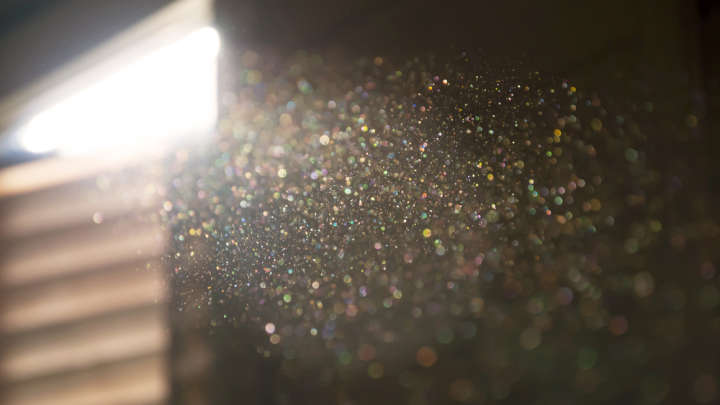 Get your dustpans at the ready. Researchers have shown that bacteria can hitch a ride on a fleck of house dust and pass on their antibiotic resistance genes to others.

Antibiotic resistance is most often associated with the overuse and abuse of antibiotics. However, the main mechanism for the spread of antibiotic resistance in bacteria is horizontal gene transfer. As opposed to “vertical” transmission, when DNA is passed from parent to offspring via reproduction, horizontal gene transfer allows genetic material to be passed on to a neighbor.

According to a new study in PLOS Pathogens, scientists from Northwestern University in Illinois have shown that antibiotic-resistant bacteria can hitchhike from outside into homes and mingle with existing bacteria. Once nestled close together, they can then pass on the genes that give them resistance to antibiotics.

“A nonpathogen can use horizontal gene transfer to give antibiotic resistance genes to a pathogen. Then the pathogen becomes antibiotic-resistant,” Erica Hartmann, lead study author from Northwestern Unversity, said in a statement.

“We observed living bacteria have transferable antibiotic resistance genes. People thought this might be the case, but no one had actually shown that microbes in dust contain these transferable genes.”

The research gathered dust samples from over 40 different buildings and looked for the presence of different species of Staphylococcus bacteria. Overall, they found the bacteria had at least 183 antibiotic resistance genes, of which 52 were potentially mobile and able to be passed over via horizontal gene transfer.

It’s thought that the bacteria undergo this gene swapping behavior because they are “stressed out” while living indoors, often subjected to dry conditions, cold temperatures, lack of nutrients, and the remnants of antibacterial cleaning products.

Antibiotic resistance is one of the biggest threats currently facing humanity, according to the World Health Organization. Within recent decades, a growing number of infections – such as pneumonia, gonorrhea, tuberculosis, and salmonella – are becoming harder to treat as the antibiotics used to treat them become less effective. By 2050, drug-resistant “superbugs” are estimated to kill an extra 10 million people each year worldwide, overtaking the number of deaths caused by cancer.

While all of that sounds deeply worrying, it’s worth noting that this new discovery shouldn’t terrify you too much. Forgetting to dust your picture frames won’t immediately raise your chances of developing antibiotic resistance, for example.

“This evidence, in and of itself, doesn’t mean that antibiotic resistance is getting worse,” Hartmann adds.

“It’s just one more risk factor. It’s one more thing that we need to be careful about.”