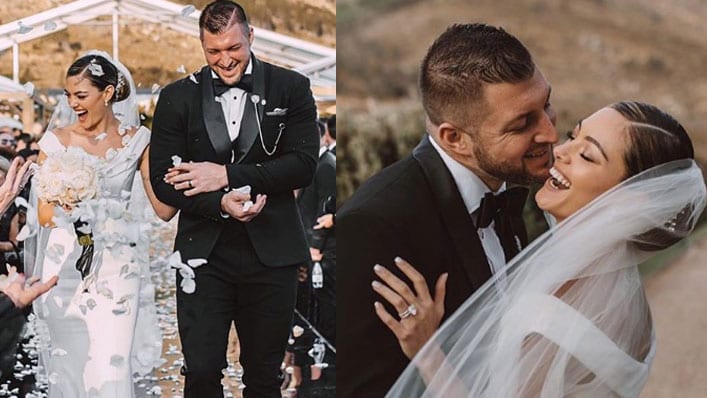 Tim Tebow is officially a married man. While all the fangirls may be mourning the loss of one of America’s most coveted bachelors, the former NFL quarterback couldn’t be happier to have found his “forever” at last—as he indicated in an Instagram post captioned by that word alone.

“Forever @DemiLeighNP”, he wrote in an Instagram post on January 20th, featuring a photo of the 32-year-old gazing at his smiling sweetheart, Demi-Leigh Nel-Peters.

24-year-old Nel Peters shared a different photo on the social media platform of her and her new hubby walking down the aisle, sharing beaming grins. “Forever and Always,” the beautiful bride captioned the image.

The pro baseball player met the former Miss Universe at a “Night to Shine” event hosted by the Tim Tebow Foundation.

“Her sister has special needs, so we invited them to Night to Shine in South Africa,” Tebow told Kathie Lee and Hoda on TODAY back in 2018. “We kind of met and started talking through that and haven’t stopped.”

The pair has been inseparable ever since.

Tebow took Nel-Peters to his family’s farm on the outskirts of Jacksonville, Florida to pop the big question in January of last year. As the former Miss Universe 2017 emphatically said ‘yes’, Tebow put a 7.25-carat diamond on her finger, saying, “This ring is internally flawless. Just like you.”

PEOPLE reported that the ceremony was held at La Paris Estate in Cape Town, South Africa.

Unsurprisingly, the couple decided to pen their own unique vows to each other. The former Heisman Trophy winner said he wanted to ensure they were just right.

“I want the vows to be perfect,” he told PEOPLE. “I’m leaving in the traditional things like till death do us part,’ but I’m also adding some of my own things to it.”

Tebow couldn’t be happier to finally settle down with the love of his life.

“I’ve been waiting my entire life for someone special, who I can spend the rest of my life with,” he said. “I was waiting for the right person to come along. And now I’m marrying Demi. I can’t wait to see what our future holds. All of my dreams have come true. It was 100% worth the wait.”