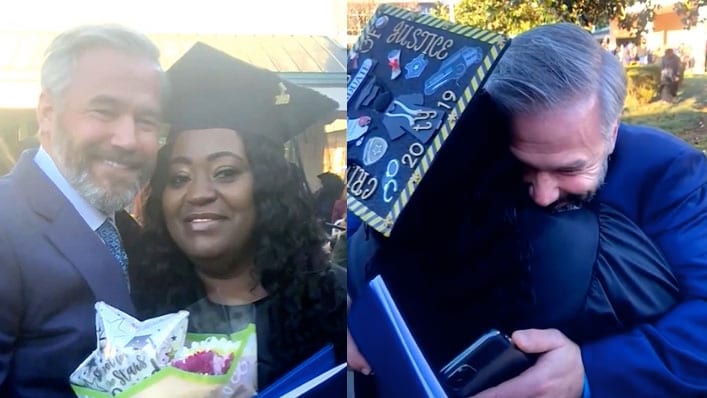 A kind stranger has changed one Atlanta Uber driver’s life for the better after paying off her college debt.

The passenger, Kevin Esch, first heard the single mom’s story when she picked him up for an Atlanta United game at Mercedes-Benz Stadium.

On that serendipitous day, the driver, LaTonya Young, had explained that she was working as a hairstylist by day and Uber driving by night.

As Esch dove deeper into Young’s life story, he discovered that the 43-year-old had dropped out of high school at 16 after having her first child. More recently, she was forced to drop out of college at Georgia State University due to an outstanding balance of $700 that she couldn’t afford to pay off.

“Every time I got ready to pay the money, my kids needed something. I said, ‘OK. I’ll just wait,’” Young explained.

And just a few days after that exchange, a little miracle happened for the struggling single mama.

Georgia State called Young and left a message stating, “You can register for classes now.”

“I was literally blown away,” said Young after discovering Esch was the one who paid off her debt. “A stranger has never done that, or done anything like that for me.”

With that burdensome financial obstacle out of her way, the Atlanta mom was able to finish her associate’s degree in criminal justice.

I maintained my grades, A’s and B’s, just trying to make sure he knows I appreciate him,” she said.

Young kept in touch with Esch, who ended up attending her graduation ceremony last month.

Esch said that Young has inspired her and he’s blessed by having had the opportunity to help her achieve her dreams.

And Young certainly isn’t stopping in her pursuit of higher education. Now that she has her associate’s degree under her belt, she plans to pursue her bachelor’s in hopes of becoming an attorney.

And it’s all because one beautiful stranger decided to lend a helping hand to a woman he hardly knew.

“Kevin Esch has been justifiably applauded and heralded for providing the funds to enable Georgia State student Latonya Young to earn a college degree, but his gift is so much bigger than that,” Andrea Anne Jones, a spokesperson at Georgia State, told CNN. “With it he has changed a life and opened a door to a brighter future for a student who, like so many others we see at Georgia State, simply needs a chance to achieve and succeed.”

Read Next On FaithIt
Uber Driver Pretends to Be Woman’s Boyfriend—When She Yells “Hi Babe!”, He Knows the Trick Worked