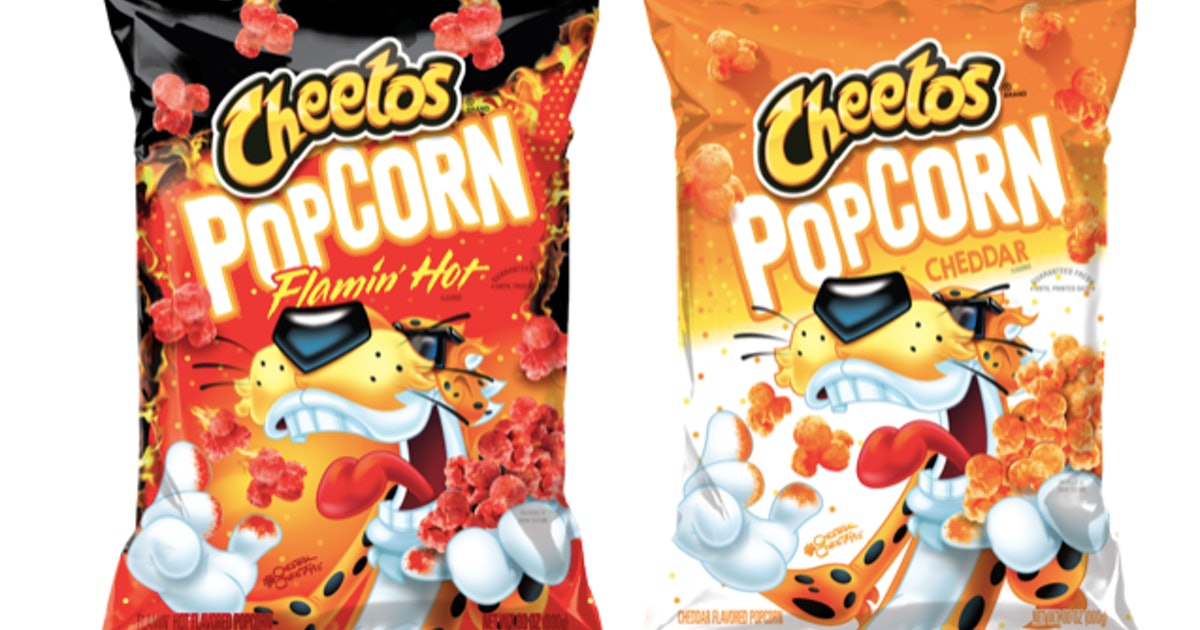 With this new innovation from Cheetos, Flamin’ Hot stans will have a new way to get their spicy fix. Your Netflix and chill sessions are about to get a major upgrade in the snacking department, because a new Cheetos Popcorn now exists. The snack comes in the company’s popular cheddar and Flamin’ Hot flavors, and it’ll definitely spice up movie night..

Starting on Monday, Jan. 13, the addictive cheesy snack you already know and love is getting a makeover, with the release of Cheetos Popcorn. If you wish you could liberally sprinkle Flamin’ Hot dust on pretty much anything, you’ll be happy to know you’ll now be able to munch on popcorn seasoned with the savory blend of cheese and spice. This Flamin’ Hot Cheetos Popcorn sounds, dare I say it, even better than the original Flamin’ Hot Cheetos, and it’s about to be a welcome addition to your snack sessions this year.

For those who’d rather not turn up the heat quite so much but still want plenty of cheesy goodness, there’s also a cheddar version of the Cheetos Popcorn that’s sure to make you look forward to movie nights.

The best part is that both popcorn varieties come already popped in the bag, so you don’t have to worry about heating anything up or taking any extra steps before digging in.

If all of this is making your mouth water, you’re in luck, because the you’ll be able to pick up your choice of the Flamin’ Hot Cheetos Popcorn or Cheddar Cheetos Popcorn the week of Jan. 13. They’ll be available in either a 9.75-ounce or 2-ounce bag for $4.29 and $1.89, respectively, wherever Cheetos are sold, so I’d recommend grabbing a few of each to stock up for your next Netflix marathon.

This isn’t the first time Cheetos got in on the popcorn game. You might remember Regal Cinemas’ Cheetos Popcorn offering, back in December 2017. That cheesy movie snack was a combo of Cheetos-flavored popcorn and actual Cheetos, and it was only available in theaters. If you didn’t get your hands on it a couple years ago, you have a new chance with the new Cheetos Popcorn. There aren’t any actual Cheetos bits in these new bags from the brand, but there’s plenty of cheesy goodness to make up for it.

It’s not clear if these will be permanent offerings from Cheetos, so it’s probably best to snag a bag or two once they hit shelves in mid-January.