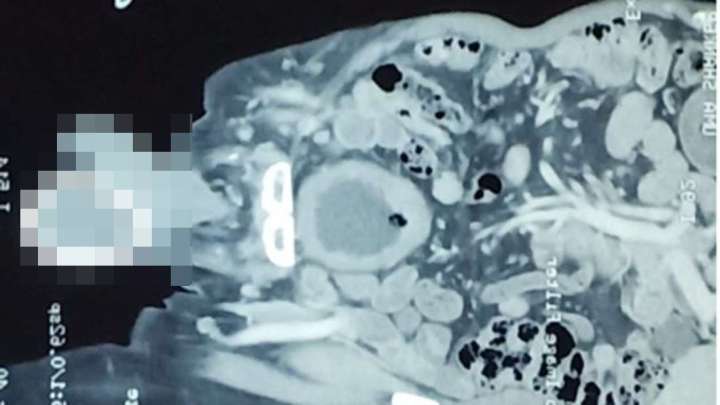 An 80-year-old man in India sought medical help after he found blood in his urine, was having trouble urinating, and was experiencing other symptoms of a urinary tract infection. However, he soon discovered that his problems went beyond a simple UTI, as one of his testicles had become calcified, with an “eggshell” forming around it.

A physical inspection revealed he had a “grossly enlarged” right testicle, which was “stony” to the touch. A CT scan of the area revealed he had an abnormal collection of fluid in the tunica vaginalis (the pouch of tissue membrane that covers the testes), known as a hydrocele. Hydroceles are normally painless and – when not caused by trauma, cancer, or hernias – can resolve themselves, especially when they occur within the first year of life.

However, they can cause complications, including ruptures, infections, and what was found in this man: It had caused the wall of his sac to calcify.

Calcification is the accumulation of calcium in a body tissue. Calcium is carried around the body in your blood, so calcification can take place almost anywhere at sites of infections or persistent inflammation. It’s not an uncommon occurrence – most kidney stones are made of calcium, for example – however, hydroceles that result in calcification are very rare.

The man’s doctors, writing in BMJ Case Reports, note that his hydrocele was likely caused by filariasis – an infection caused by filarial worms, which are transmitted to humans through mosquito bites. These parasites develop into adult worms in the lymphatic vessels, causing severe damage and swelling.

“Elephantiasis – painful, disfiguring swelling of the legs and genital organs – is a classic sign of late-stage disease,” the authors write in the report.

Repeated swelling likely caused the hydrocele to form, and it got progressively bigger over the years.

And that’s how a mosquito bite likely caused an “eggshell” of calcium deposits to form over the sac surrounding the man’s testicle. If you want to picture it more vividly (and we don’t see why you would) the calcification is like an eggshell, with fluids inside like the white of an egg, and his testicle was bobbing around in there like a yolk.

The doctors note that such cases can be treated through surgery for the hydrocele, care of the skin, and exercise to help with lymphatic drainage.