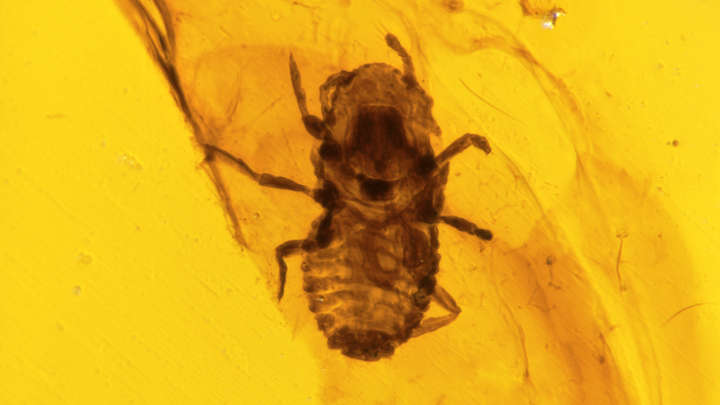 Despite their might and ferocious reputation, prehistoric dinosaurs hid a banal problem behind their feathered locks: lice.

A newly identified species of insect have been found on the feathers of a mid-Cretaceous dinosaur trapped inside amber. At approximately 100 million years old, these teeny lice-like insects are the earliest known evidence that insects liked to chow down on dinosaur feathers.

Reported in the journal Nature Communications today, the two chunks of amber were originally discovered in the Kachin Province of northern Myanmar, a Southeast Asian nation where an incredible amount of amber is found. These two pieces of amber date to the mid-Cretaceous period somewhere around the 100-million-year-old mark, although they’re perhaps older.

Inside the two pieces of amber, scientists from Capital Normal University in Beijing and the National Museum of Natural History in DC found 10 insect nymphs preserved on two dinosaur feathers, which were 12.7 millimeters and 13.6 millimeters in length. While the researchers aren’t certain of the dinosaur species, they believe the feathers belonged to a non-avian coelurosaurian dinosaur, a broad clade that includes tyrannosaurs, ornithomimosaurs, and maniraptorans.

Perhaps most interesting of all, one of the feathers appeared to be damaged, suggesting it had been chewed on by the lice, according to the researchers.  Dubbed Mesophthirus engeli, the 0.14-millimeter to 0.23-millimeter-long insects are extremely similar to the kinds of modern lice you’d expect to see on a bird, complete with strong chewing jaws and extended mandibles.

While this is not the first time parasites living on dinosaurs have been described, it is the earliest direct evidence yet of lice-like insects dwelling in the feathers of mid-Cretaceous dinosaurs. The mid-Cretaceous was a good time to be a feather-loving louse. This was a period that saw a huge diversification of birds and other feathered dinosaurs. It appears that, perhaps, the M. engeli lice were taking full advantage of this.

“This finding demonstrates that feather-feeding behaviors of insects originated at least in mid-Cretaceous, accompanying the radiation of feathered dinosaurs including early birds,” the study authors write.

It looks like these lice were not the only parasite to worry about, either. A study published in 2017 detailed the discovery of a tick that sucked the blood of feathered dinosaurs from the Cretaceous period.