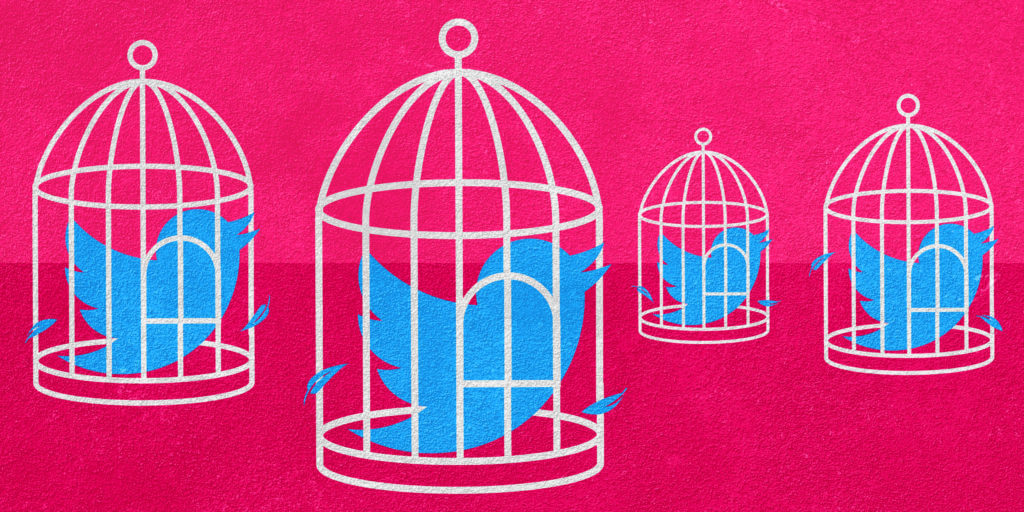 Twitter is the best of times. Twitter is the worst of times. Wading through the steaming piles of morons, bigots, attention seekers, subtweeters, hypocrites, propaganda and utterly incomprehensible randomness can feel like the internet version of drowning in someone elses dirty bathwater.

Happily, Twitter tries to take out its own trash, though it also makes mistakes policing content. The social media platform that (permanently suspended) writer Ally Maynard calls the bathroom stall of the internet has some standardsthreats bad, dick picks okay. Break the rules, and you might find yourself in Twitter jail, from whence you may never return.

This year the platform that brings us laughter, rage, breaking news, and generational slamfests like #OKBoomer has suspended accounts we love, hate and, perhaps best of all, love to hate. Heres the 2019 highlight/lowlight reel of the best, worst and most bizarre Twitter suspensions of 2019. Is it weird that we miss them? Well, some of them.

No one is exempt from Twitters rulesnot even God. The @TweetofGod account run by writer-producer David Javerbaum was suspended in June for a tweet supportive of the LGBTQ community. If gay people are a mistake, theyre a mistake Ive made hundreds of millions of times, which proves Im incompetent and shouldnt be relied upon for anything, God wrote. Twitter claimed this violated its rules against hateful conduct.

Our Heavenly Father was not amused.

After someone actually read the darn thing, the company reversed course, apologized and reinstated the Big Guy, or Gal if you prefer, proving the existence of a higher social media power.

Krassenstein to the second power

Twins Brian and Ed Krassenstein dont just look, sound, and think alikethey tweet alike, too, mostly at President Donald Trump. At least they did until Twitter snatched the resistance bros accounts from them in May. The company claimed that theyd operated fake accounts and purchased followers, which the duo denied.

A few months later, they returned as @2Krassensteins, launching the account with a lengthy thread explaining that they thought Twitter had banned their old accounts, but not them personally, or something. Alas, the good times couldnt last. They were unceremoniously booted before lunchtime.

The dark lord of MAGA memes, Carpe Donktum (real name Logan Cook), beloved on the right and be-loathed on the left, has made a bit of a habit of getting his Twitter jacked. In May, Carpe Donktum was temporarily suspended after one of the Krassensteins (doesnt matter which) called upon their followers to report him for posting a photoshopped meme of Trump as a cowboy slapping around CNN reporter Jim Acosta.

Once bitten didnt make Donktum twice shy, however. In October, he was again temporarily suspended for, Twitter claimed, numerous complaints of copyright violations. The Donktum wasnt down long, and got his account back before days end. Today he can be found tweeting MAGA morsels to his hearts content at least for now.

This was truly the year of Jacob Wohl. Scarcely a month went by without news of him scamming immigrants out of thousands of dollars with false promises of getting Trump to do a speech, making up a sex scandal about any Democratic politician someone would pretend to have had an affair withdominatrix cougar Sen. Elizabeth Warren (D-Mass.) is everyones favoriterunning a fake intelligence agency or five, all while he traveled the world (or pretended to), and begged for gifts on Gab.

Never one to overthink, or even actually think, in February Wohl got kicked off Twitter because he told USA Today that he planned to use the platform for election interference. In July, he returned, resurrecting an account that had been dormant for years. For a few days things were much as theyd been, with him merrily tweeting ill-informed nonsense like only Jacob Wohl can. Then the Daily Dot reported that he was back and *poof* Twitter banished him again. Womp womp.

Woe is Andy Ngo. Whining is this dudes default mode, when hes not yukking it up while Proud Boys plan a violent attack or pretending to do journalism by selectively editing videos to own the libs. In November, Ngo was suspended for violating Twitters policy against hateful conduct when he claimed that the U.S. is one of the safest countries for transgender people, murder rates are lower for trans people and Black men are responsible for most murders of trans people.

True to form, Ngo responded to the suspension by complaining a whole lot. That didnt get him anywhere, so he deleted the tweet.

For a time, Cursed TikToks gave us a reason to live. The account posted the cringiest videos made on the platform that is oddly beloved in newsrooms nationwide. In August, the account that brought smiles to so many abruptly and permanently vanished from Twitter. They later told the Daily Dot that Twitter permanently suspended them based on copyright complaints by a company that purchases TikTok video copyrights but wouldnt tell them which ones.

Happily, Cursed TikToks lives on as @TabooTikToks on Instagram, so we can all feast our eyes on delights like these.

In August, Venezuelan President Nicols Maduro became one of the most stunning Twitter shunnings of the year. Amid unrest in the South American country, Twitter suspended Maduros English-language account. The account was eventually reinstated; Twitter said it had found no violation of its policies.

To many, the suspension was a signal that Twitter might finally be willing to take action against high-profile politicians and world leaders who break its rules. Cant imagine who most of them had in mind.

Dolan Dark mightve achieved the ultimate in shitposting when Twitter fell for one of his jokes. The company apparently believed Darks bio describing himself as a 12-year-old music critic and suspended him for being too young to tweet. (You have to be 13 to use the site.)

Dark eventually convinced Twitter that he is not, in fact, 12 years old, and returned to meme his way to internet glory.

For conspiracy theorists like Brenden Dilley, these are the salad days. Every news cycle brings another opportunity to spread lies. QAnon follower Dilley managed to cross a bridge too far for even Twitter when he started circulating false rumors that the El Paso shooter was a member of antifa, among other lies about the mass shooting that claimed 20 lives. Twitter suspended Dilley, and he has yet to return.

Running for Congress is hard. Its even harder when you get permanently locked in Twitter jail. Thats precisely what happened to Danielle Stella, who is challenging Rep. Ilhan Omar (D-Minn.), when she tweeted that Omar should be tried for #treason and hanged if she gave sensitive info to Iran.

The claim was apparently based on bogus, unverified stories that Qatar recruited Omar as an asset, according to theNew York Times. Stella denied that her tweet was a threat, but Twitter wasnt buying it. The company refused to budge, releasing a statement that her suspension was based on repeated violations of its policies.

This is the natural result of a political environment where anti-Muslim dogwhistles and dehumanization are normalized by an entire political party and its media outlets.

On the other hand, the company also suspended a slew of people who dissented against the Egyptian government during a wave of protests in September, later conceding that many of the suspensions were mistakes.

We saved the weirdest Twitter suspension for last. The unsanctioned mascot of Susaki, Japan is much beloved for sowing chaos and discord wherever it goes. Chiitans online antics even earned it praise from John Oliver, who called it psychotic but conceded that its often violent tweets were virtuosic. In Chiitans defense, otters gotta otter.

Chiitans millions of fans worldwideand one million Twitter followerswere mightily disappointed in May when Twitter booted the delightfully bizarre Pokemonesque mascot who delights in smashing things. Chiitan-gate was an extremely complicated dispute involving Japanese tax law, copyrights, and Shinjokun, the official otter mascot of Susaki. (Yes, there are two. No, we dont know why.) Thousands signed a Change.org petition to rescue the chaotic neutral otter from Twitter jail, sadly all for naught.

Happily, Instagram isnt quite so particular about who uses its platform.

With all these suspensions, the question becomes: WhowontTwitter put on lockdown? Well, neo-Nazis and white nationalists for one, which it wont autoban because too many GOP politicians would get caught up in the dragnet; and American presidents for two.