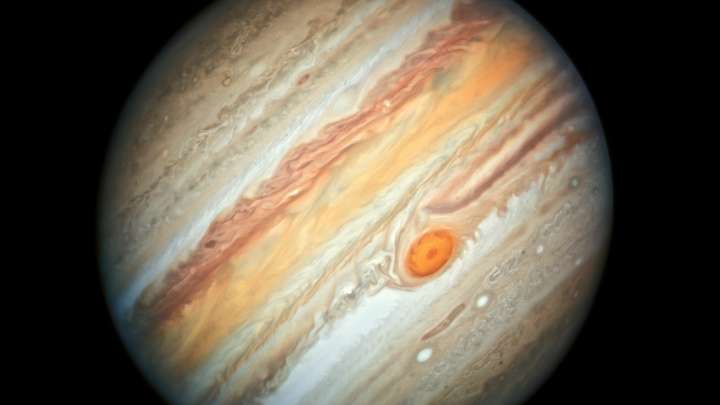 Jupiter sports an incredible storm, an anticyclonic vortex larger than our planet whose color and size has earned it the name of the Great Red Spot (GRS). Monitored since at least 1830, it is believed to have existed for centuries. However, over the last few decades, professional and amateur astronomers have noticed that the spot appears to be shrinking.

The general consensus is that the Great Red Spot might disappear sooner rather than later. Amateur astronomers conducted observations in May and June that revealed a long stream of gas expanding out of the GRS. Without any professionals wading in at the time, many wondered if this was truly the beginning of the end for the storm.

Physicist Philip Marcus, from the University of California, Berkeley, is here to reassure us all. The GRS might be shrinking, but the storm is doing just fine, not dying. Marcus will present his findings at the 72nd Annual Meeting of the APS Division of Fluid Dynamics, explaining how the red flakes being shed by the GRS are nothing to worry about.

“I don’t think its fortunes were ever bad,” Marcus said in a statement. “It’s more like Mark Twain’s comment: The reports about its death have been greatly exaggerated.”

The team tested their hypothesis with numerical simulations, which showed that the large flakes, some 100,000 square kilometers (38,600 square miles) in area, are due to the collision between the GRS and smaller cloud formations. These interactions can create stagnation points. In this location, the velocity of the clouds goes to zero, and when they begin to move again, they can do so in a different direction. The shattered clouds are the origin of the red flakes.

Marcus and his collaborators state that the GRS is not going anywhere because secondary circulation above and below the storm helps fight off energy loss and keep it alive.