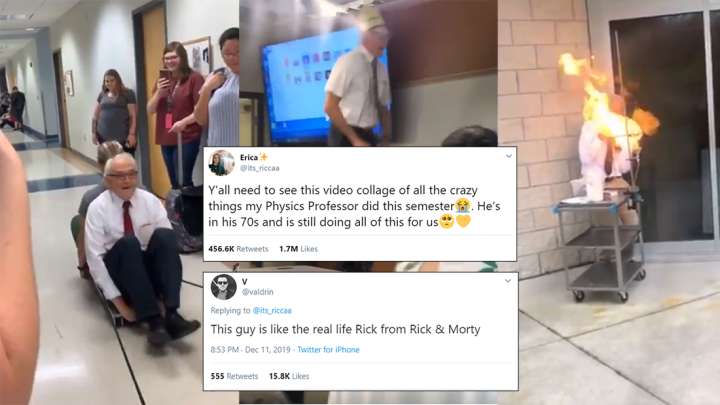 A video montage of a physics professor has gone viral, because he really puts the effort into his classes.

Last week, physics student Erica (its_riccaa on Twitter) tweeted a montage of the experiments her professor at Tidewater Community College in Virginia Beach performed this semester, all in the name of educating his students. Dr David Wright – in his 70s – does everything from sitting on a skateboard and propelling himself using a fire extinguisher to bringing in and then lying on a bed of nails to demonstrate force per unit area.

Erica tweeted out the video under the caption “Y’all need to see this video collage of all the crazy things my Physics Professor did this semester”. It has since received nearly half a million retweets.

People are big fans, and wish they’d had a physics teacher so invested in his work and able to make the subject fun.

He has since learned of his viral fame via email and taken it humbly, writing to Erica: “Thank you very much for sharing that with me. It was an amazing semester, because I had amazing students”.

He has also been interviewed by WTKR, where you can see even more of his fun experiments.

If only all teachers were like this, or had the adequate funding to try.