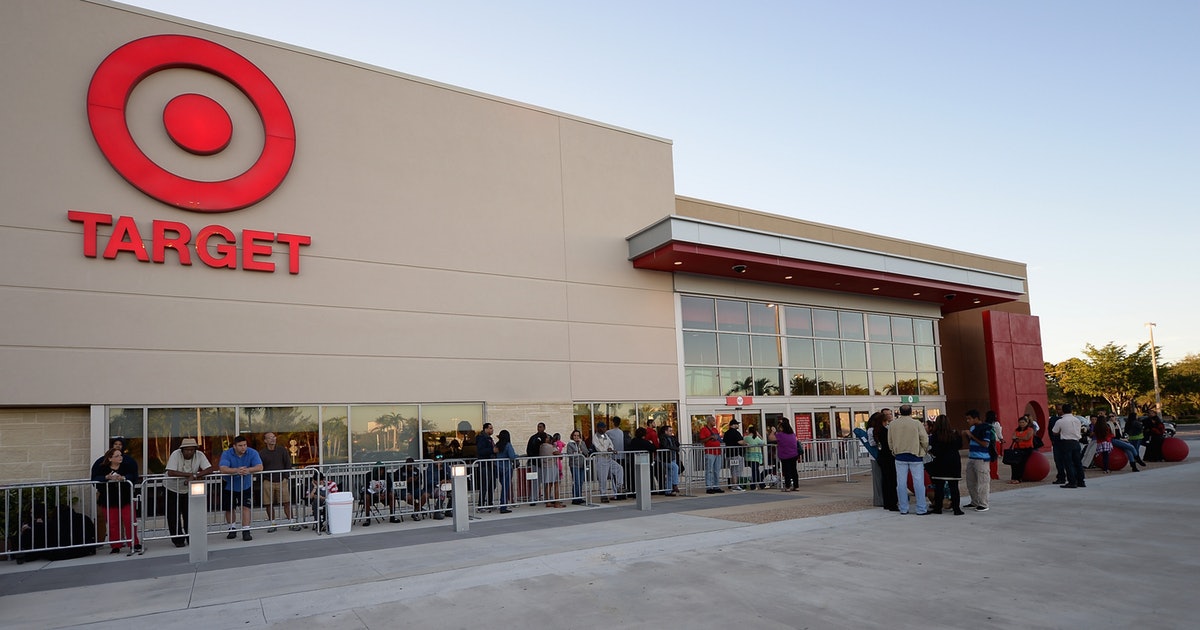 What Time Does Target Open On Black Friday 2019? You Can Get Started Early

With the biggest shopping day of the year just weeks away, it’s time to start putting together your Black Friday game plan. If you’re wondering what time Target opens on Black Friday this year, get ready to leave Thanksgiving dinner a little early. According to the superstore, sales start as early as Thanksgiving morning, giving you even more time to rake in the savings this year.

According to the chain’s official announcement on Nov. 6, Black Friday deals at Target will begin online at Target.com as of Thanksgiving morning on Thursday, Nov. 28 — there’s no official online start time, so just start checking early. Black Friday deals will hit Target stores at 5 p.m. local time on Thanksgiving day, Nov. 28. Stores will remain until 1 a.m. on Friday, Nov. 29, giving early bird shoppers ample time to snatch up some of the best deals before Black Friday even officially starts. For shoppers who don’t want to start their browsing until after Thanksgiving is over, Target will re-open stores again on Friday morning at 7 a.m. local time.

Shoppers who spend $50 on Black Friday deals on Friday, Nov. 29 will also be treated to a 20% off coupon (redeemable Dec. 3 through Dec. 14), according to Target’s Black Friday press release.

While Black Friday is still a few weeks away, Target is getting the “holi-deals” started early. From Friday, Nov. 8 through Saturday, Nov. 9, shoppers can make like it’s Black Friday by shopping some of the biggest deals from the company’s Black Friday ad, which apparently features quadruple the amount of deals on items like electronics, toys, clothes, and more compared to 2018’s offerings. Compared to last year, this year’s Black Friday Preview Sale will last two days instead of just one, so there’s another 24 hours for you to browse the thousands of products on discount.

In addition to specialty Weekend Deals, which will be spotlighted each week on A Bullseye View from Nov. 16 through Dec. 15, Red Card and Target Circle members can get the Black Friday shopping started even earlier with early access to online deals on Wednesday, Nov. 27. Red Card members will get the regular 5% off all purchases and Target Circle members will get 1% back to use on a future purchase.

Winter is coming, y’all, so I’d check out all the offerings in the Black Friday ad and ready your wallets for the dose of retail therapy come Nov. 28.

This article was originally published on Nov 6, 2019