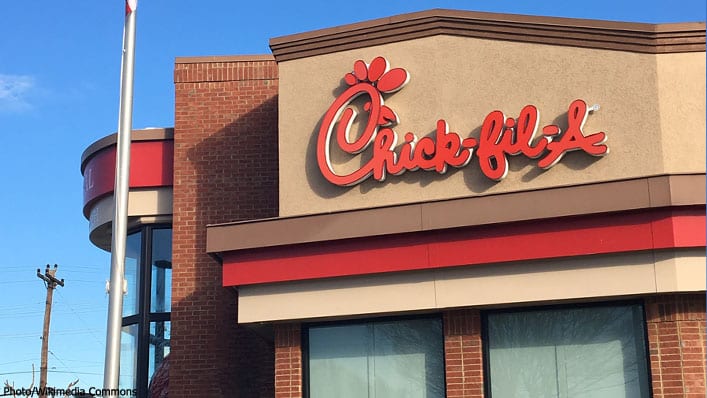 The Lord loves chicken, but more than that, He loves people. I was reminded once again how religion stifles that love and how we, as the church, can point out the sawdust in someone’s eye better than anyone. A recent story emerged in the media, and like the good, obedient children we are, we slurped up what the angry masses were serving. 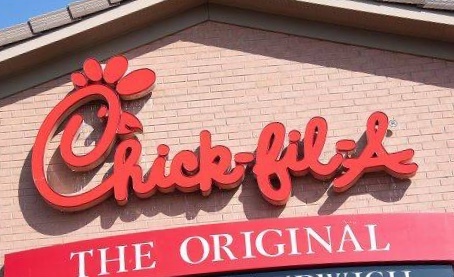 How dare Chick-fil-A back down from their Godly principles and give in to the masses for the sake of money?!

If you missed the hoopla on social media, it seems the popular chicken chain stopped supporting Christian charities. Specifically, it had ceased support of two particular charities with a history of opposing same-sex marriages. So sayeth the media. Articles erupted detailing how the restaurant would no longer be donating to charities that stood in opposition to the LGBTQ community, and we all know how our favorite fast food joint had received flack in the recent past from the Left due to their support of “anti-gay charities.” Had Chick-fil-A finally caved?! Well, that seemed to be the religious sect’s stance. Even politicians came out of the woodwork with their opinions. 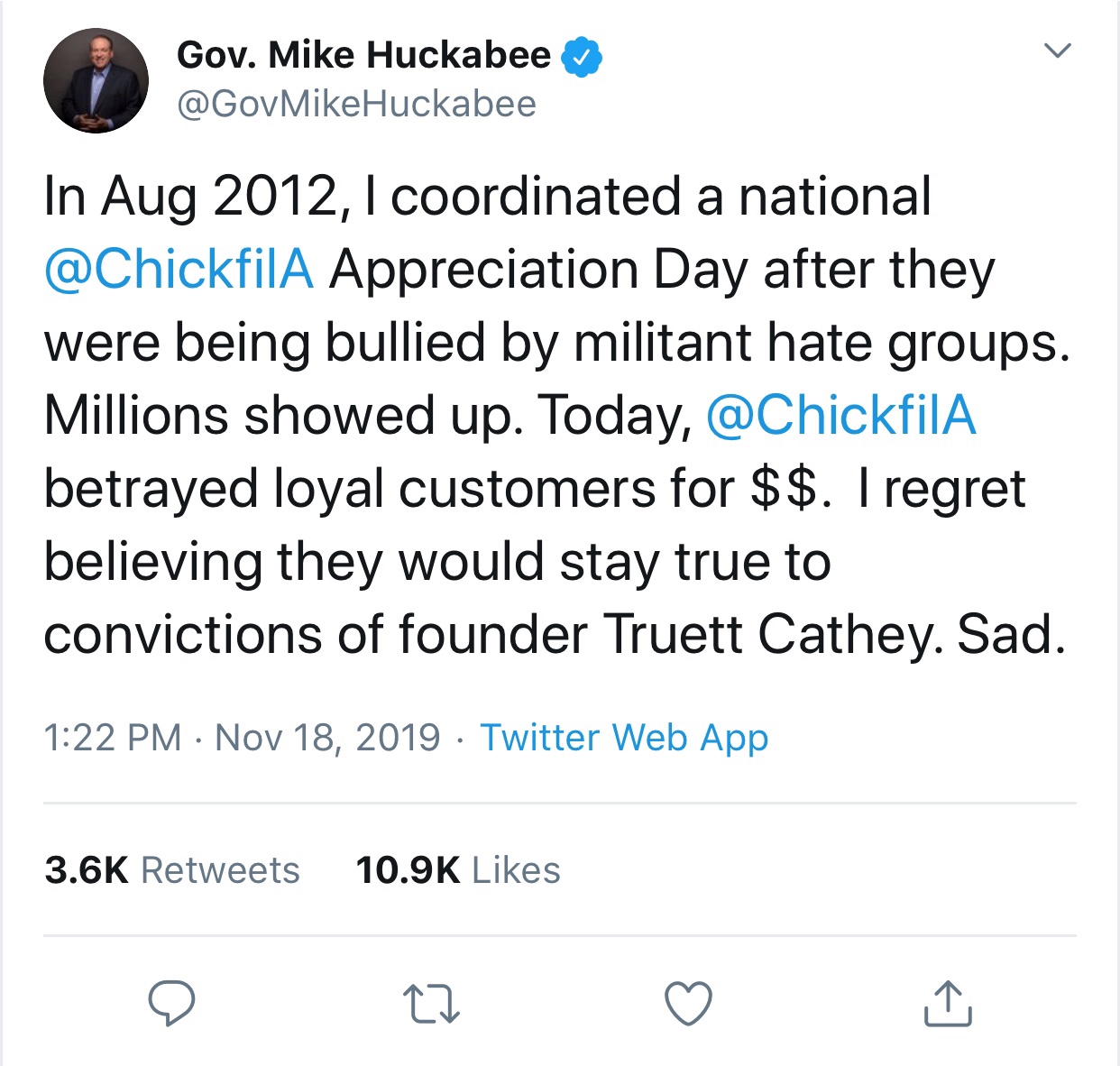 Never mind that people are dying of hunger or children as young as eight are being sex trafficked. Let’s focus our energy on fast-food politics.

President of the Billy Graham Evangelistic Association, Franklin Graham, even talked to Chick-fil-A CEO Dan Cathy personally and made the following announcement on Facebook this morning:

“Has Chick-fil-A caved? Some are saying they’ve rolled over, that they’ve conceded to the LGBTQ protests because they released a statement about their charitable giving. They announced that in 2020 they’re giving to fight hunger and homelessness and support education. What’s wrong with that?

I picked up the phone and called Dan Cathy. Dan was very clear that they have not bowed down to anyone’s demands, including the LGBTQ community. They will continue to support whoever they want to support. They haven’t changed who they are or what they believe. Chick-fil-A remains committed to Christian values. Dan Cathy assured me that this isn’t going to change. I hope all those who jumped to the wrong conclusion about them read this.

In my opinion, the gay movement wouldn’t ever be happy with Chick-fil-A unless they were open on Sunday, gave all of their charitable donations to LGBTQ organizations, and flew the rainbow flag over their stores! Their hatred for Chick-fil-A is rooted in founder Truett Cathy’s strong stand for biblical ‘traditional’ values and his desire to honor God.

No fast food chain does a better job.“

Personally, I first heard about the backlash on a news channel in my patient’s hospital room over the weekend. Such an important news story, it seemed. When will we open our eyes to the division the media promotes?

My first thought (as a Southern, Christian Woman who loves Jesus), “oh, I get it. They want to show love without bias. Makes sense.”

Like, I never even thought, oh my gosh. I can’t believe they’re backing down from their convictions! The world is going to Hell in a handbasket!

No, I didn’t see this as a backing down move. I just saw it as a sign of love. I’m reminded of another unpopular opinion I hold as a Southern woman. As a Mississippi native, I am in favor of replacing the state flag of Mississippi. Forever it’s been the Confederate flag, and the majority of my peers from our state desire to hold on to it for reasons of “standing true to their Southern Heritage.” And while I’m all for pride in heritage, moreover I’m all for loving people. If something I “stand for” hurts a large group of people (such as the African American community) then I will lay down my pride in favor of love. Is that so crazy?!

But this post isn’t about flags, rather it’s about our innate ability to become offended about anything. It turns out it wasn’t even like the media made it sound. Chick-fil-A didn’t suddenly withdraw their financial support to appease protestors, but rather restructured their giving when the contractual obligation came due to renew. I mean, I’ve given to Christian radio stations in the past, but as God led me to different areas of giving, I’ve rerouted my funds to say the homeless and shelters for those who have been sex trafficked. Does that mean I no longer stand for Christian music? Of course not.

But even if it was a thing (and not just a media fabrication to cause division among the church), what would be so wrong with a Christian influencer within the community, such as Chick-fil-A deciding it wanted to remove itself from a controversy that made it appear judgmental and uncaring.

You might remember a story from around 2,000 years ago. It seems that this radical lover was causing quite a stir for his association with prostitutes and thieves. You might recall reading about it.

12 On hearing this, Jesus said, “It is not the healthy who need a doctor, but the sick. 13 But go and learn what this means: ‘I desire mercy, not sacrifice.’[a] For I have not come to call the righteous, but sinners.”

This was my first thought when I heard the story about Chick-fil-A. I didn’t assume they had laid down their guns out of fear or for monetary gain, but rather to break bread (and chicken nuggets, if you will) with everyone who would come to the table. Once there, you can’t help but notice the friendly staff, the faithful favor of God in the business, or that amazing sauce. After all, it’s at the table where Jesus gave of Himself to those around Him, and we as Christians will never be able to pass along His love if we’re making restrictions for the dining hall.

Jesus said, “come to me, all who are weary and burdened and I will give you rest (Matthew 11:28).

What He didn’t say was, ‘come to me, everybody, but only if you’ve read my laws and are abiding by them completely! Then we can talk.’

If that were the case, I don’t think any of us could come over for dinner. Just saying. You invite folks over; God will take care of the rest.

Listen, I’m all about the Bible. I’m all for calling a sin a sin, and I’m all about standing firm in my convictions. The problem that occurs is we get so caught up in “the law” and pointing out wrong from right that we neglect the awesomeness of grace. We forget that we’re all sinners, unworthy of the gift we’ve been given, but thankfully saved by His great grace. Yet instead of paying forward that mercy that was given us, we pull out the judge’s gavel.

Do y’all remember that parable Jesus told about the master who forgave the huge debt his worker owed him? If not, allow me to summarize. This dude’s debt was totally forgiven, wiped clean and let go. Awesome, right? Well, this same fella comes across a worker of his own who owes him some change, and instead of passing along the grace he was given, he demands repayment. So when the big boss finds out, he locks up the first fella for not forgiving as he was forgiven.

Do you see where this is going?

It’s all good to stand for what you believe, but if you throw stones to do it, what does that say about you? If you can’t open up your table to the folks who are the most hungry, what kind of servant are you?

Don’t let the enemy succeed in separating the children of God. Don’t fall into the trap of the religious Pharisees. Don’t condemn a man with sawdust in his eyes; you’re missing the plank in your own.

The Lord loves chicken, I’m certain He does, but more-so I know for a fact that He loves people. If what we’re doing doesn’t reflect that, then maybe it’s time to change the recipe.

Read Next On FaithIt
“Not One Person Said No”: Chick-fil-A Workers Refuse to Go Home After Mass Shooting, Serve 500 Sandwiches to Texas Police