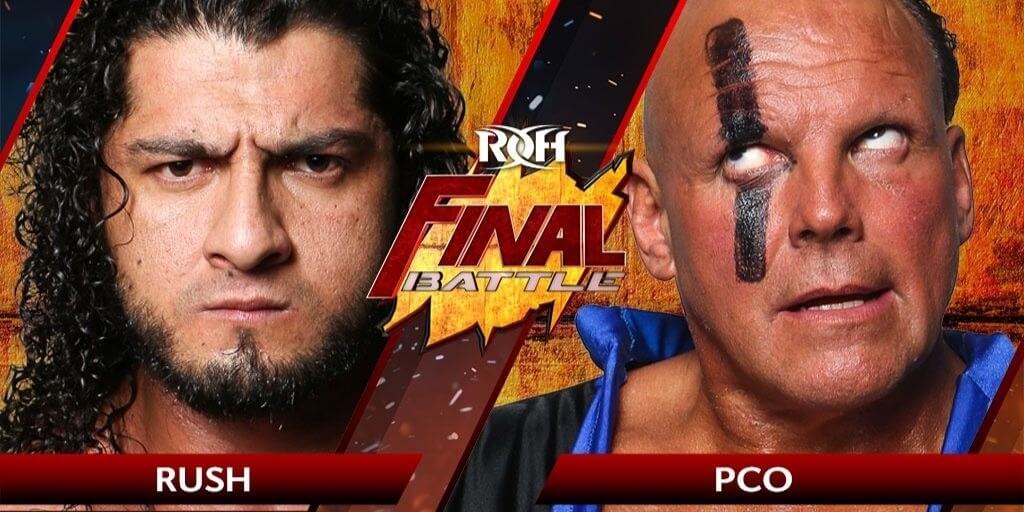 Rush joined Ring of Honor about a year ago, and hes never lost a match in the independent pro wrestling promotion. In September, he won the ROH world title from Matt Taven at the Death Before Dishonor PPV, and three months later, Rush will put his undefeated record and his championship on the line vs. PCO in the main event of Final Battle.

Dec. 15, 2018 turned out to be an important date for ROH. That was the day Rush and PCO made their separate debuts for the company. Rush had been a star in Mexico, and PCOwhos now 51 years oldwas once one-half of the three-time WWF tag team champions The Quebecers in the mid-1990s.

Both have made big-time names for themselves in ROH. Rush has dominated en route to the world title, including multiple victories against former ROH champion Dalton Castle, while PCOs only loss of the past year came to Taven at War of the Worlds in May.

Now, the two are ready to face each other, as PCO eyes the first major world title of his long career.

Im popped right now; getting ready, PCO told Main Event Radio. Ive had a few title matches in my life, in my career. This one is without a doubt the most important one and the one with the most interest and publicity This past year was something I dreamed about for so many years and I got to live that perfect year and its a great feeling of achievement as an athlete.

Rush vs. PCO is only one of the potential heart-pounding matches scheduled for Final Battle. Shane Taylor will defend his TV title vs. Ryu Lee, and the Briscoes will put their tag team titles on the line vs. Jay Lethal and Jonathan Gresham. Taven, meanwhile, will take on Vincent for his first PPV appearance since losing his belt.

Heres everything you need to know to watch the ROH Final Battle live stream.

The best way to watch these Ring of Honor wrestlers compete on Final Battle is through Fite TV.

Since its a PPV, theres no legal way to get around the $34.99 fee to watch the card. But Fite TV (sign up here) has got you covered. Fite TV is available on services like , Apple TV, Amazon Fire Stick, PlayStation 4, Xbox One, Android and iOS devices, desktop and laptop computers, and smart TVs.

If youre an ROH Honor Club member, though, you wont have to pay as much to watch the PPV.

The Honor Club, which costs $9.99 per month or $119.99 for an annual VIP membership, allows subscribers to stream Ring of Honor house shows via rohwrestling.com, to watch video on demand from the ROH vault, and to take 50% off the cost of the PPV telecasts (VIP members get to stream PPVs for free).

On Friday, youll get to watch some action without having to pay anything. The first hour of the show will air for free at 7pm ET on Fite TV and on the ROH Facebook page. On that portion of the show, Dalton Castle and Joe Hendry will take on Silas Young and Josh Woods, and Rhett Titus will battle Kenny King.

For a year-round sports fix, sign up here and check the sports box to receive our weekly boxing newsletter. Youll hear about all the biggest fights and best knockouts from the Daily Dots streaming sports guru Josh Katzowitz.