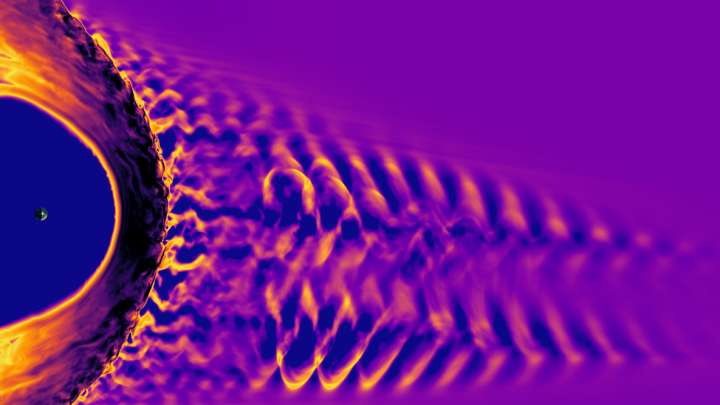 For the first time, scientists have recorded the “song” Earth sings when it is hit by a solar storm, and having translated these electromagnetic waves into audible sound, you can listen to it right here.

It turns out, the stronger the storm, the louder Earth “sings”. And yes, it sounds eerie.

Our planet’s magnetic field protects us daily from the Sun, which is both life-giving and would wipe us out in a second, were it not for the field preventing the onslaught of radioactive winds generated by our star from entering our atmosphere.

These solar winds – streams of charged particles – that flow out from the Sun’s atmosphere and into the Solar System constantly collide with Earth’s magnetosphere. However, during particularly strong ejections known as “solar storms” – which can wreak havoc with modern technologies on Earth – the particles slam into the outermost region of the magnetic field, called the “foreshock”, with such force that some bounce back into the oncoming stream, generating magnetoacoustic waves that can be recorded and now played for your audible pleasure.

The first recording is the sound of Earth’s “song” during normal conditions in space while the second recording was made during a solar storm.

Reporting in the journal Geophysical Research Letters, researchers from the University of Helsinki analyzed data from the Cluster Science Archive. Cluster is a European Space Agency (ESA)-led mission investigating Earth’s magnetic environment, which has been going for nearly two decades.

The team, led by Lucile Turc, discovered that during the early part of its mission, the four spacecraft that make up Cluster repeatedly flew through the shock region between 2001 and 2005, providing data on six such storm collisions, recording the waves they generated.

Their analysis revealed that when a solar storm strikes the foreshock, it releases magnetic waves that are much more complex than we had realized.

Cluster also recorded the waves generated by the solar winds colliding with the magnetosphere during calm times, so they could be directly compared. They discovered that during quiet times, Earth’s song is lower in pitch, with one main single frequency, but during solar storms, the frequency of the waves roughly doubles, with the precise frequency depending on the strength of the storm.

“Our study reveals that solar storms profoundly modify the foreshock region,” said Turc in a statement. “It’s like the storm is changing the tuning of the foreshock.”

It’s not just the frequency of the waves that changes, however, it’s the complexity. Instead of a single frequency, when the storms hit the foreshock the waves break into a network of complicated higher frequencies, and as they can’t escape into space due to the incoming solar storm, they are pushed back toward Earth propagating magnetic disturbances all the way to Earth’s surface in a surprisingly short time. Just 10 minutes from the moment the waves are generated to the energy reaching the ground.

A greater understanding of solar storms and Earth’s interactions with them could help us prepare for the very rare, but rather destructive geomagnetic storms of a magnitude that could cause huge disruptions on an increasingly technology-reliant Earth. The last time this happened was 1859, luckily, before modern technology had really taken off. Known as the Carrington Event, it still managed to knock out telegraph systems across much of Europe and North America. If one of this magnitude were to occur today, its effects could be catastrophic.