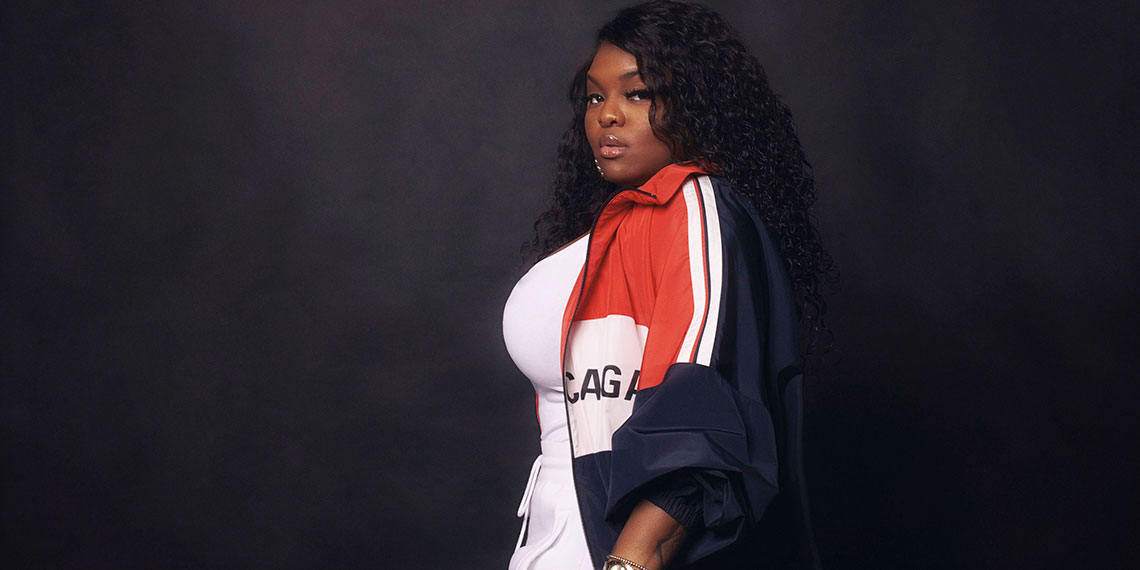 Body positivity is having a moment this year. With the rise of actors like Jameela Jamil who waste no time calling out harmful diet products and toxic beauty ideals to musicians like Lizzo who unabashedly flaunt a body that does not conform to conventional standards, and preach self-acceptance, body acceptance is at the forefront of cultural conversation in a way it hasn’t been before. And hopefully, it lasts longer than a passing fad. Because if there’s one 2019 trend I can get behind—since clear plastic shoes and the comeback of low-rise jeans are not it—it’s spending less time injecting, chemically altering, and sweating our way into a different body and just being happy with the way it is instead.

Enter Inayah, Houston-based singer, whose following exploded in 2018 when she took to Instagram to post a remake of Ella Mai’s “Boo’d Up.” To say her rendition went viral is an understatement; it catapulted her following from a humble 3,000 to some 1.6 million. Her H-town roots have quickly earned her comparisons to artists like Lizzo and Meg Thee Stallion, but these ladies don’t only have their hometown in common—Inayah, like the aforementionedpowerhouses, is also making waves for championing body positivity and self-love. Case in point: Her song, “Chunky Bytchez Win’n”, off her new album, S.O.L.A.R. (short for Storytelling Over Lyrics and Rhymes), out now via Inayahlator Enterprises/EMPIRE.

While not a total celebration of self-love, the song does promote unconventional body types, which we need more of in pop culture. Many of the lyrics, like “he said big girls not his type, I bet I could make him change his mind” and “yea I’m heavy but I’m good at it,” seem to promote thickness mostly in its ability to be pleasing to men. However, the hook that repeats “chunky bytchez win’n” is where the song succeeds. It is, by definition and practice, the catchiest part of the song, and the part I predict will be sung by the masses as an anthem. In other words, the memorable part of the song is not the sexual bravado, but the statement: chunky bitches winning.

Chunky Bytchez Win’n is not just the name of one of the singles off her album; it’s also Inayah’s slogan, a way to reclaim a word that’s been commonly used to degrade bodies, especially female bodies. She explained to Betches, “So many of us feel like we have to look and live up to a certain standard, but being curvy or fluffy doesn’t mean you don’t look good! I’m winning in this body and I want other women that look like me to know they can too!”

Inayah’s confidence is hard not to feel inspired by. Now that she’s amassed over a million avid fans, among them the likes of Tiffany Haddish and Jamie Foxx, it’s safe to say Inayah is in the spotlight. And with that will likely come more criticism—both constructive and, well, not. But the prospect of fending off online trolls who will make comments about her body does not faze the singer, songwriter, and businesswoman. When asked how she deals with the extra criticism that comes with being in the public eye, she defiantly proclaimed, “I don’t give a damn about any of that! I do me, and I do it very well.” Well said.

Maybe that’s because her confidence is, in the truest sense, intrinsic. We asked what has helped her feel comfortable in her own skin, anticipating she’d give some kind of tip like “saying positive things to yourself every day” or some tricks like that. But, no. Her answer? “The day I realized and actually paid attention to the fact that I’m winnin’ just as I am! I’m achieving every goal I set out to accomplish without pressuring myself to look like an IG model! People love me, so I said ‘I’ma love me too damnit!’” Basically, she’s sure of herself because she knows she’s the sh*t. I hate to say anything or one is “goals” because it’s played out, so I’ll just say that mindset is… aspirational.

But just because she’s not worried about what random people on the internet have to say about her “chunky” physique doesn’t mean she does not battle her own insecurities from time to time. Unlike other people in the spotlight who stay mum about their insecurities and only project an unflappable image of self-assuredness, Inayah acknowledges that while she loves her body, she does at times toy with the idea of making a change. “It’s a process, and it takes commitment to some not-so-easy changes. So I decided I’ma love this body I’m in, chunky and all, and work at my own pace to be healthier, not the other way around.” That kind of honesty is refreshing, and it’s helpful to have someone who, on the one hand, is comfortable in their own skin but also recognizes they still may have room for improvement. The only potential downside I can see of this large push towards self-acceptance is that it could make people feel pressured to love themselves all the time, and feel shame about having insecurities. So, especially in this social media-fueled highlight-reel culture, having someone be open about the ups and downs is important—and whether through her music or just her platform in general, Inayah vows to tell her truth and express her feelings honestly.

“I’m just here to be straightforward with you all,” she said. “I’m going to freely say things that so many other people might be afraid to say. I’m not afraid to voice my opinion or what I’m going through. I want to share that with listeners, especially women.” From heartfelt ballads like “Best Thing” to bangers like “Can’t Afford It” to surefire radio hits like “N.A.S.”, her emotional transparency is evident. In the first song on S.O.L.A.R., “Waiting For”, she croons, “I could wear a thick skin on the outside, inside you would never see / open wounds and these bruises bleeding but that don’t even bother me.” On her latest single “Real Love,” Inayah warns against the perils of fake people, with lyrics like “I don’t apologize for reaching my goals and chasing my dreams / if you mad at that then you a jealous little bitch.”