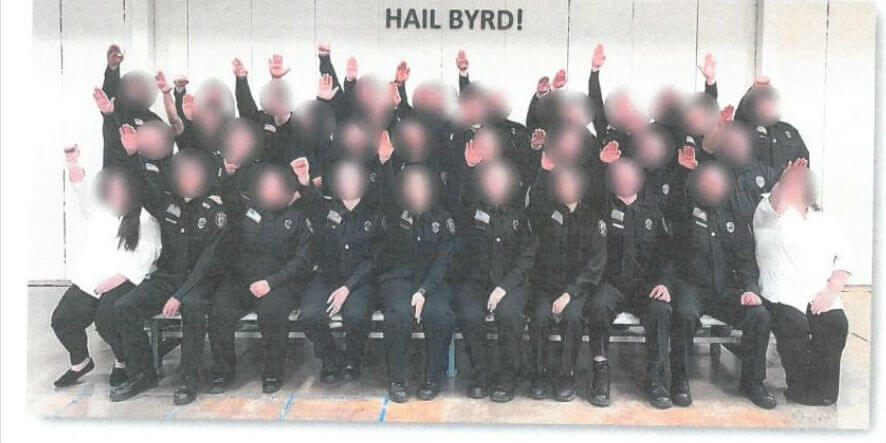 A photo has surfaced of dozens of corrections officers in West Virginia doing a Nazi salute, and now some employees in the photo may be facing termination.

BREAKING: Photo released that has led to numerous DOC employees being suspended, WCHS reporter Leslie Rubin tweeted, along with the photo. The photo is titled HAIL BYRD.

BREAKING: Photo released that has led to numerous DOC employees being suspended pic.twitter.com/Lee98ldVl2

In the photo, more than 30 participants in the basic training graduating class of 2019 (which was conducted from Oct. 21 through Nov.27) posed with their arms raised in the Nazi salute.

West Virginia Gov. Jim Justice issued a statement condemning the photo in the strongest possible terms. The Republican governor also called for an investigation into the incident and for the employees involved to be fired.

I have directed Secretary Jeff Sandy of the Department of Military Affairs and Public Safety to continue actively investigating this incident and I have ordered the termination of all those that are found to be involved in this conduct, he wrote in the statement. This will not be tolerated on my watchwithin the Division of Corrections and Rehabilitationor within any agency of state government.

Sandy reiterated the condemnation of the photo, calling it hurtful, disturbing, highly insensitive and completely inappropriate in a letter addressed to the organizations employees. The letter is titled Conduct Unbecoming by Members of DCR.

It betrays the professionalism I have seen time and time again displayed and practiced by our brave correctional employees, the letter continued.

Rubin later clarified that WCHS did not blur out the faces of the individuals in the photograph.

This is the way the picture was released by the state, Rubin wrote in a follow-up tweet.

I would also like to point that that WCHS/WVAH did not blur the picture. This is the way the picture was released by the state.

Virginia is now receiving backlash for releasing the photo with faces blurred out. Many online are calling for the faces of the officers to be revealed.

— i bless the rains down in castamere (@Chinchillazllla) December 5, 2019