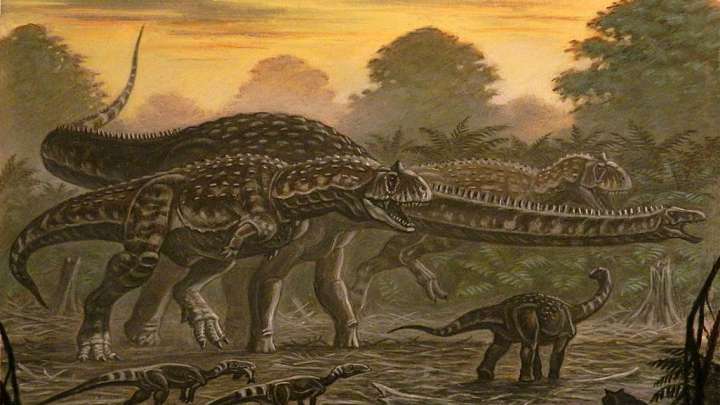 Sharks famously replenish their toothy grins with a conveyer belt of gnashers, but it seems they’re not alone. Majungasaurus, a predatory dinosaur that lived in Madagascar 70 million years ago, could replace its teeth just as fast, growing a new tooth in each socket roughly every two months.

Reporting their findings in the journal PLOS ONE, a team from Adelphi University and Ohio University examined tiny growth lines, the tooth equivalent of tree rings, in fossil dinosaur teeth. They also scanned fossilized jaws to catch a glimpse of any unerupted teeth hiding in the bone. This helped them to determine how quickly new teeth might have emerged.

The team also examined the tooth replacement rates of two other genera of theropod (“beast-footed”) dinosaurs, Allosaurus and Ceratosaurus. They found that these dinos replaced their teeth every 100 days or so. Theropods walked on two sturdy hind legs, had three toes at the end of each limb, and were ancestrally carnivorous, with some groups evolving to favor other diets. T. rex is the most famous member of this group, which included species as small as chickens.

So why might Majungasaurus have needed a new set of teeth so often? The team thinks it’s probably down to a high rate of tooth wear, noting that speedy tooth replacement is normally seen in large plant-munching dinos like neosauropods and hadrosaurids. But instead of chowing down on tough plant material, Majungasaurus gnawed on bone.

“[T]hey were wearing down their teeth quickly, possibly because they were gnawing on bones,” lead author Michael D. D’Emic of Adelphi University said in a statement. “There is independent evidence for this in the form of scratches and gouges that match the spacing and size of their teeth on a variety of bones – bones from animals that would have been their prey.”

Some of today’s creatures, like rats and squirrels, gnaw on bone as it’s a good way to obtain certain nutrients and ensures healthy tooth growth. Rodents’ teeth continue to grow throughout their lives, and gnawing on something hard helps to ensure their teeth don’t grow crookedly. As they gnaw, their cheek muscles move rapidly which leads to “eye boggling”, as their eyes move up and down at speed.

Successful bone gnawing requires very strong teeth, something that Majungasaurus did not possess. Therefore, it developed the ability to replace its teeth instead, with new ones emerging every 56 days. Now, the team hopes that future studies will look for the phenomenon in other species, to see how widespread this bizarre trait truly was when dinosaurs walked on Earth.

“I’m hoping this latest project spurs more people to study other species. I bet that will reveal further surprises,” said D’Emic. “And hopefully that will lead to a better understanding of how dinosaurs evolved to be successful for so long.”