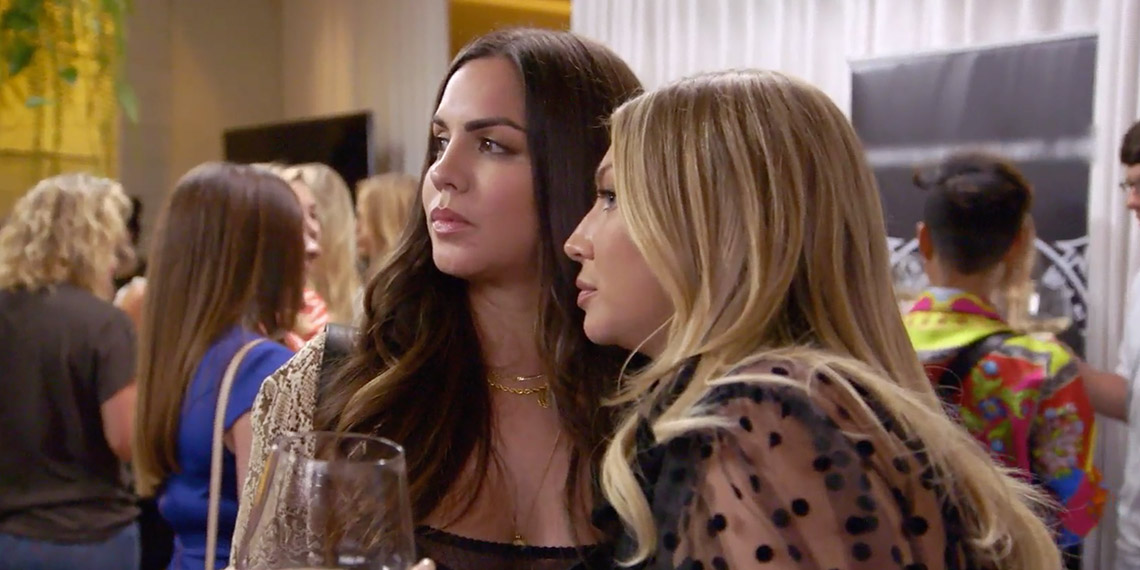 I simply must be honest with you all, I feel as though I’m going soft. I know that the general temperature of Reddit, Bravo Facebook groups, and my esteemed colleague and Bravo expert Dylan Hafer seems to be that this season of Vanderpump Rules is trash. But honestly? I find myself liking it. Sure, the subplot between Dayna and whichever TomTom server she’s chosen that week is fake AF. Sure, we don’t care about Jax and Brittany’s wedding. But you know what I cared about even less? The emotional abuse cycle of Jax cheating on Brittany and generally treating her like sh*t and then gaslighting her for being upset about it. Katie and Tom’s Bubba circle-jerk. Lala going on and on about how she likes to please “her man”.

For all its flaws, Vanderpump Rules could certainly be a lot worse this season. Just remember that, lest we piss off the Bravo gods with our complaining, and they give us three more seasons of Dayna pretending to be interested in Brett or Max. The reality is, this show is too far gone to ever return to its days when the producers would literally sit back and watch these degenerates tear each other to shreds. The show’s too big now, and (some of) the cast are at least a little conscious of their public perception.

So with that honors thesis out of the way, let’s get into this week’s episode.

The episode kicks off with Dayna and Brett at a fake bartending school, where they are being taught how to mix drinks by a 12-year-old. (Or at least, he looks like one.) Which is oddly fitting considering Dayna says that being a bartender is “in her blood” since her mom was a bartender who taught her to make dirty martinis when she was eight years old. I mean, something is in her blood—I’m just not sure it’s bartending.

Apparently Schwartz really did lose the marriage certificate again, but not to worry—the Vegas chapels probably know that everyone getting married on their premises and can no longer hold onto their dignity, let alone a piece of paper, so they sent it in on their behalf. Honestly, though, I stand by my sentiment that I would take two failed marriage certificates as a sign from the Universe not to go through with it.

Stassi’s still taking jabs at Beau because he hasn’t proposed yet. Stassi is also mad at Kristen because, basically, Kristen still wants to be Beau’s number one, not considering that that would be wildly inappropriate considering 1) Beau is now dating her good friend, and 2) Kristen has f*cked Stassi’s ex before. Can you wonder why Beau would be extra cautious around Kristen? It’s so Stassi doesn’t, to quote Lala, “pop him”.

Kristen says that she, Stassi, and Kristen built their wine company “from the ground up.” Ah yes, the American Dream! Building a wine company from nothing but the backs of your Instagram followings that were in turn built off the backs of you being cast on a wildly successful reality TV show! Pretty sure that’s what my grandparents left Italy for.

Actually, remember what I said about how this season is a bit of fresh air from the past season’s regurgitated drama? I take it all back because Scheana’s talking to Lisa about her egg retrieval, once again insisting how she’s “not looking for a relationship” and “just having fun being single” and whatever party line she’s been toting out since the last season ended and she got mocked by the whole internet for how she behaved with Adam. Why don’t I buy what Scheana’s trying to sell me? Is it because I’m judging her on past behavior too much and assuming people are incapable of change? Or is it because the lady truly doth protest too much?

Whatever the reason, Lisa isn’t buying it either, and I can at least be comforted knowing I’m not alone. And the fact that it took Lisa straight-up saying to Scheana’s face that she thinks she’s full of sh*t to get her to admit that her revolving door of men have actually f*cked her up, kind of proves that I was right all along. Vindication!

Between Scheana being upset that her booty calls have not called to check in on her after her egg retrieval surgery and the fact that she busted her knee open after razor scootering, I’ve gotta say, it feels like Old Scheana is back. Is her tooth still gray? Give it one more episode and we’ll get the chunky glasses back. Damn, I forgot how entertaining that Scheana was. I’m actually surprised she’s not walking around on crutches right now.

Scheana tells Dayna that she saw a psychic, and she hired that psychic to have Dayna’s mom come through for her birthday. Oh wow that is so wildly inappropriate that I can’t help but crack up to myself.

Dayna: You’ve never lost a parent
Scheana: I know, but my mom has.

Scheana… my god… you are so stupid. Her need to constantly relate everything back to herself is almost pathological.

This really brings me back to the days when Scheana would needle Shay, a known opioid addict, into drinking because she didn’t want to be married to someone who couldn’t have a few drinks with her.

And even better? Scheana was going to spring this psychic on Dayna THAT VERY SECOND. And she tries to play it off to Dayna like “omg no she’s totally not waiting outside your apartment, I wasn’t going to just have her knock on your door, omg lol can you imagine? Hahaha” but then she proceeds to shut the psychic down… OUTSIDE OF DAYNA’S APARTMENT. Lol, I don’t know if Scheana is truly the most insensitive person alive, or if the producers put her up to this and did her extremely dirty. Listening to her try to play the semantics game that she didn’t have the psychic outside waiting (she was only technically on her way to Dayna’s apartment at the time Dayna asked if she was going to knock on her door) is leading me to believe the former.

In a grim turn of events, Beau reveals to Lisa that he isn’t planning on having Kristen be present at Stassi’s engagement. If he really doesn’t invite her, he might as well enter the Witness Protection Program.

All the new people are at some club, and Dayna’s resorted to her flirting strategy of just showering Brett with compliments and blowing up his ego. If that’s what you need to get a man, I will forever be single, and I’m cool with that tbh.

Oh my god if I could buy an Emmy I would personally empty my bank account to give it to the producer who precipitated this exchange:

Brett: Where I’m from if you and your friend have sex with the same girl, it’s ok.
Producer: And where are you from?
Bretty: Jersey

That’s it, guys. We did it. End the episode here. It’s not going to get any better than this.

Even the new girls have already clued into the fact that Scheana never keeps the same story because she’s worried about looking bad. Damn, it only took them like, a few weeks? They really are smarter than the rest of the cast.

James and Lala are back in the studio, much to the dismay of… anyone with ears. They actually have a pretty productive conversation about sobriety. Also, does having a stress dream about having gotten f*cked up mean I have a drinking problem? Whatever, I’ve only had one today. One… shelf.

Finally we get some back alley action at SUR (not like that, get your mind out of the gutter) when Brett goes out to talk to Scheana. She’s salty that she’s been blowing up his phone and he didn’t text her back. Scheana! He does not have to answer every single one of your texts! He’s not your boyfriend.

Scheana definitely has a point that she shouldn’t bother with friendships in which she puts in all the effort. However, there’s no point in announcing to someone that you’re dropping them as a friend because they don’t put in effort. You just stop putting in the effort and let the friendship fade.

But then Brett tag teams Dayna in, and she’s not over the psychic. I wouldn’t be either, and I wouldn’t even try to be friends with someone that out of touch with reality. I know, I wouldn’t last a second on this show.

It says a lot that Kristen is physically helping set up the wine party and Stassi and Katie just waltz in and start drinking. But honestly… a mood.

This Us Weekly reporter is gonna be so pissed when she watches this season and realizes that Stassi, Katie, and Kristen lied to every single question she asked them in this interview. Lol.

Danica pitches a SUR vs. TomTom softball game, which will be a fun fake plotline later on in the season.

Also, Max comes up to Dayna to basically tell her that he’s pissed about the Brett thing, but they’re both “moving on” and “ready to be friends.” K, sure Jan.

This whole thing of Ariana and Lala talking about why they’re still friends with James does not interest me, so I’m just going to watch IG Stories.

Whoops, I watched Insta stories for too long and almost missed Stassi talking to Beau about how they’re going mausoleum shopping tomorrow (???) when he’s actually going to be popping the question next episode. But was it worth the constant complaining, Beau? WAS IT?? Because I don’t think it was. Stassi, once again, is talking about how she’s over Kristen as a friend. Beau asks her like, one follow-up question and she immediately starts crying.

Anyway, this is awkward because wine-drunk Kristen goes up to Beau to ask if they’re still friends. Beau actively tries to avoid saying he can’t be friends with her anymore because Stassi doesn’t like her, but Kristen pokes at it until he’s basically forced to admit the truth.

Stassi goes completely ballistic, and ah yes, this is Old Stassi. Damn, first Old Scheana, now Old Stassi? What an episode. Yeah, she’s back on her hive mind bullsh*t where nobody she associates with is allowed to be cool with anyone she doesn’t like. In fact, if you don’t wish ill upon whoever Stassi doesn’t like at the moment, you’re dead to her. Remember Lala circa… up until this past season when she gave them rides on the private jet? Beau, if you would so much as piss on Kristen if she were on fire, Stassi will torpedo your entire relationship.

Stassi gives Beau an ultimatum that he should either go home with her or Kristen. Bud, you might want to rethink that proposal tomorrow. Maybe you shouldn’t have lied to Stassi all summer, and then she wouldn’t have freaked out in a tornado of insecurity. Ya hate to see it!