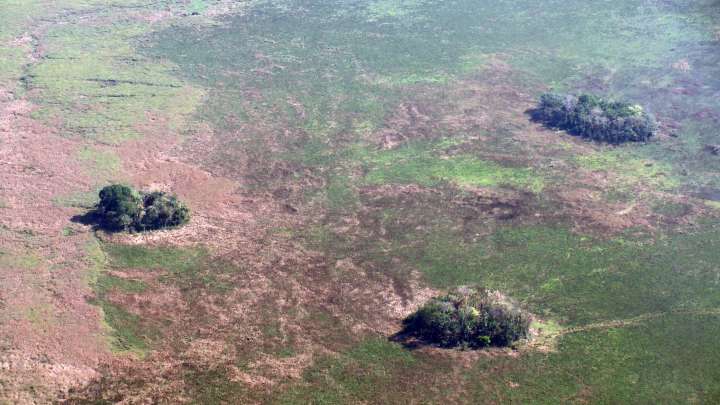 Around the time the last ice age was ending, agriculture sprang up at several sites. The south-western Amazon Basin has now been revealed as the fifth site at which this great innovation occurred. The planting took place in so-called “forest islands”, patches of soil averaging just half a hectare that are raised enough above the flood plain to allow trees to flourish.

There is little doubt that humans have had a major impact on Bolivia’s Llanos de Moxos savannah for a long time. Ancient earthworks and canals attest to this, but these are thought to be less than 1,500 years old, leaving open the question of when agriculture there began.

In order to identify the age of human changes to the landscape, Dr Umberto Lombardo of the University of Bern mapped 6,600 forest islands and investigated 82 in-depth to see if they were natural or made by people thousands of years ago.

“Archaeological evidence for plant domestication is very poorly available, especially in Amazonia where the climate destroys most organic materials. There is no stone in this area because it is an alluvial plain (water deposited),” co-author Dr José Capriles of Penn State University said in a statement.

However, Capriles provides evidence in the journal Nature that cassava was grown in some of these islands 10,350 years ago and squash soon after. Maize first appears almost 7,000 years ago.

The crops were identified from phytoliths, tiny silica particles formed inside plants whose shape indicates the species they come from. Radiocarbon dating gives the phytolith’s age. Based on the abundance of plants suited to the human diet, and the presence of charcoal and shell fragments, 64 of the sampled islands were considered to be of human origin, suggesting some 4,700 of the islands were the product of human activity.

Sites like these were probably once far more widespread, but the area floods frequently and many locations are buried beneath meters of mud.

The Amazonians had a big impact on our modern diets. Peanuts, chili peppers, and some beans are among the plants first grown there and bred over thousands of years for abundance and taste to give us the foods we love today.

“Archaeologists, geographers, and biologists have argued for many years that southwestern Amazonia was a probable centre of early plant domestication because many important cultivars like manioc, squash, peanuts and some varieties of chili pepper and beans are genetically very close to wild plants living here,” Lombardo said. “However, until this recent study, scientist had neither searched for, nor excavated, old archaeological sites in this region that might document the pre-Columbian domestication of these globally important crops.”

Capriles and co-authors think they can estimate the diet of the first Amazonian farmers based on the phytoliths they have found, although they guess fish and hunted herbivores occasionally supplemented what was grown.

The discovery makes south-west Amazonia only the fifth place in the world known to have invented agriculture, rather than importing the idea from elsewhere. The other four are China, The Fertile Crescent, southwestern Mexico, and the Andes.