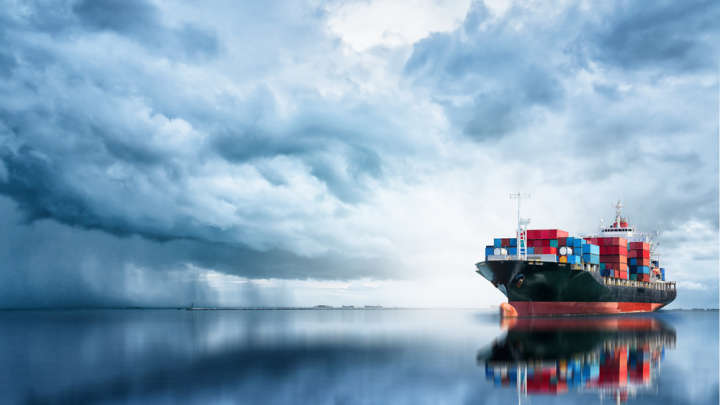 Human activity can have some disastrous and unexpected impacts on wildlife, as highlighted by a new study in the journal Current Biology, which reveals how shore crabs lose the ability to change color when they become stressed out by ship noise. Given that this chameleon-like capacity to alter their pigmentation acts as one of their main defences against predators, the consequences of increased shipping could be disastrous for these vulnerable crustaceans.

According to the study authors, the noise pollution created by shipping activity has raised ambient ocean sound levels by 10 to 15 decibels. To determine what effect this has on marine life, the researchers collected shore crabs with dark shells and placed them in three white-bottomed containers, thereby prompting the animals to turn white in an attempt to blend in with their new environment.

One of the three containers was bombarded with an hourly recording of a passing ship, at a volume that would normally be produced by a vessel about 200 meters (656 feet) away. Crabs in another container were exposed to loud underwater sounds, while those in the third were played quiet underwater sounds.

After eight weeks, crabs in all three containers had become lighter, although the color change was only about half as pronounced in the crabs that had been subjected to shipping noise, when compared to those that had been exposed to quiet ocean sounds.

Study author Emily Carter explained in a statement that “previous studies have suggested that a lot of energy may be used during color change, and stress is also thought to be costly in terms of energy. So, the most likely explanation for our findings is that the stress caused by ship noise means the crabs don’t have as much energy to devote to camouflage.”

The researchers then played recordings of birds in order to trick the crabs into believing a predator was nearby. Normally, shore crabs scurry for cover when they hear such sounds, although when ship noise was also present, roughly half of the crabs didn’t respond at all. Those that did were much slower to react than crabs that were not exposed to ship noise.

Once again, Carter believes that stress is to blame here, explaining that “similar to how people have trouble concentrating when stressed, the nature of their response indicates that they couldn’t process what was happening.”

Interestingly, ocean sounds did not have the same impact as ship noises, even when played at the same volume. This suggests that there is something about the nature of man-made noise pollution that stresses the crabs out.

“Why anthropogenic noise has such effects requires further study to determine whether it relates to its frequency distribution or temporal structure,” write the study authors.