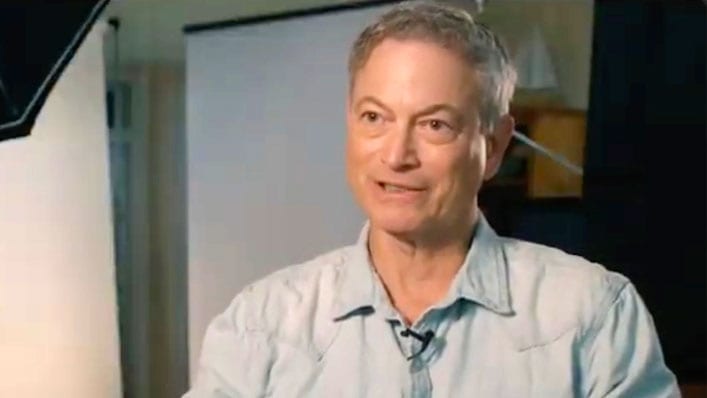 From classic films like Forest Gump to Apollo 13, Emmy-Award-winning actor, director, producer and philanthropist Gary Sinise has entertained America for over 30 years,

Now, the man we know best as Lieutenant Dan is coming back to the big screen as the beloved father of singer Jeremy Camp in the Christian film I Still Believe.

Alongside Shania Twain, playing Camp’s mom, Sinise will be acting the part of “Tom,” the then-20-year-old’s father.

The movie’s plot centers on the real-life story of Camp’s journey through love, loss, and faith put to the ultimate test.

Named after Camp’s hit single, “I Still Believe,” the movie follows the journey of his wife Melissa’s (played by Britt Robertson) sickness, as well as Camp’s testimony of overcoming adversity.

In a two-minute feature released at the end of last month, Sinise shares what it was like playing the role of Jeremy’s father.

“Initially when I read the story, I was looking at my part as Jeremy’s father, wanting to know how he invests into the story,” said Sinise. “I found it a beautiful personal father-son relationship that meant a lot to me.”

“Riverdale” star KJ Apa, who plays the role of Camp, said working with Gary was a “dream.” Their father-son connection was clear from the onset of the movie filming.

“KJ in some ways reminds me of my own son, and it’s been wonderful working with him,” shared Sinise.

“This has made me think a lot about my own son and my own relationship with my son and how important that is to me, and that’s what I love about Tom and Terry, the parents in this movie,” continued the 64-year-old actor. “They stand by him and they’re supportive, and they’re loving and they’re caring, and they will do anything for him.”

Playing the role of Tom really made Sinise reflect on his own relationship with his wife and children, reminding him just how fortunate he is to have them in his life.

“I feel in many ways that God gave me the opportunity to be a husband to my wife Moira and a father to my three kids,” the actor beamed. “And how did I get so blessed to do that?”

The much-anticipated film is set to hit theaters on March 13, 2020. Watch the emotional trailer for I Still Believe below:

Read Next On FaithIt
Shannen Doherty on How Her Cancer Battle Changed Her Marriage: “My Perception of Sexy Has Changed”