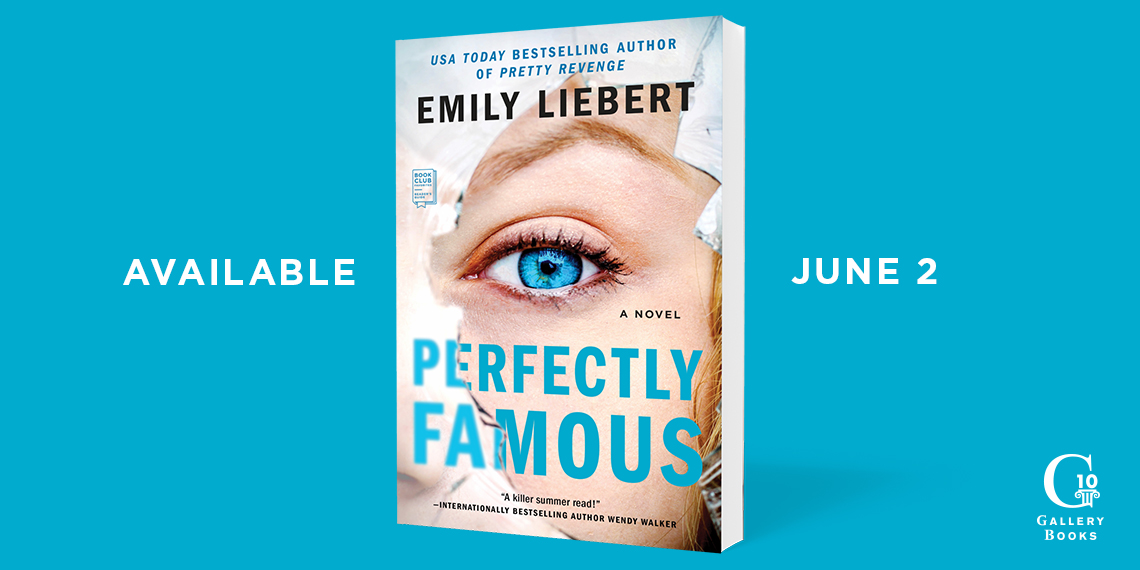 If you’ve read one thriller, you start to feel like after a certain point, you’ve read them all. We get it: the main character had amnesia all along. Two sisters switched places. It gets repetitive. So if you are getting a little fatigued of the same old twists, Emily Liebert’s new novel, Perfectly Famous, out June 2, 2020, will be a breath of fresh air, because it’s honestly kind of meta: after famous crime novelist’s Ward DeFleur’s daughter goes missing, the author is in the wind. But one journalist isn’t content with letting Ward remain in obscurity, and she becomes obsessed with finding her. This harrowing tale of one woman’s infatuation and another woman’s fear is full of explosive surprises, perfect for fans of The Night Olivia Fell and Then She Was Gone.

Emily Liebert is the USA Today bestselling author of Pretty Revenge, and Perfectly Famous will be her sixth novel. Perfectly Famous doesn’t come out until June 2, but Betches readers can get an exclusive first look at this gripping novel right now.

Fame is like a flame. A small flourish of light that’s ignited with good intentions and kindled with aggressive aspirations. But as those dreams are stoked, the flame grows fiercer, often too hot to pass your finger through. Fame can spread like a blazing rash, infecting everything and everyone in its path. The flame is inexorable. It can’t be stopped. It won’t be stopped. Until it’s extinguished.

Of course, some notoriety cannot be snuffed out. The force of it is too robust. People covet that fame. They envy it.

Those people become increasingly resentful as their small spark remains just that. No one—they think—deserves to shine forever, to eclipse all the others who are just as worthy of recognition.

Because only one other outcome is possible when a flame refuses to be choked.

The smooth rhythm of jazz music drifted from the radio as I gazed out the window at the cookie-cutter McMansions with their rambling green lawns, glistening blue swimming pools, and soaring oak trees in a kaleidoscopic of colors. This time of year, the air is crisp but not cold. Children frolick outside until just before bedtime. Doors are left unlocked.

Ten minutes passed, as we traveled out of the suburban cocoon and through town, until the car pulled to a stop. I checked my reflection in the makeup compact I’d slipped into my purse at the last minute and allowed myself one final swipe of red lipstick, to match the cover of my new novel, Mysterious Stranger. Then I took a deep breath, trapped the air in my lungs for a few seconds longer than usual, and exhaled before the driver came around to open my door.

“Ready, Ms. DeFleur?” He extended his hand, and I accepted it, grateful for the support.

“Yes,” I spoke softly and stepped onto the glossy pavement, as pellets of rain struck the umbrella he was holding. One foot in front of the other, I reminded myself. I’ve done this before. Twelve times. And I’ll do it again. I hope.

“Here we go.” He hoisted me to standing, and I noticed that a bead of water had tainted my red silk flats like an inkblot in the Rorschach test. I never wear heels. When you’re five foot ten, it’s hard enough to go unnoticed. “I’ll keep you dry.”

“Thank you.” I nodded and raked my fingers through my thick, tumbling waves of auburn hair.

The line was already wrapped around the side of the building, a buzzing procession of anticipation. Instinctively, I looked behind me. As expected, the parking lot was crowded with sedans and SUVs jockeying for an open spot. To see me. Even after so many years, it’s still hard to believe.

Once we were inside, fear rose in my chest. I scanned the troop of men and women, mostly women in dark elastic jeans, stiletto boots, and flowy blouses cut to expose just enough of their assets. The landscape was dizzying. I thought about a quick pivot. I could make it back to the town car before anyone reached me. But I didn’t move.

“Hello, everyone,” I said louder than I’d expected. I sounded confident. Unlike myself. I smiled appreciatively at the light applause.

“Fabulous, you’re here.” My publicist, Gwen, swooped in, placed one hand on the small of my back, and cupped my elbow with the other. “Let’s get you settled. The signing doesn’t officially start for another twenty minutes. We can go over some important items.”

“In here.” She thrust me into a small room with a green tweed couch and a cluttered wooden desk. “Make yourself comfortable. How are you feeling?” She motioned to the couch, dragged the metal desk chair over, and sat down on the edge of it, facing me. Her dark brown eyes were dogged. She’d rimmed them with far too much black eyeliner. And her knee was trembling. Probably from that high-octane coffee-in-a-can she drinks all day.

“That’s better. Because tonight has to go seamlessly.” She maintained eye contact. “This is the first appearance in your fifteen-city tour.”

“I know.” Between my agent, my publisher, my editor, my editor’s assistant, Gwen, Gwen’s assistant, and all the other people at Lyons & Wilder responsible for launching my books, I’ve heard fifteen-city tour more times than my brain can metabolize.

“What I’m saying is that tonight sets the tone.” She leaned in closer and searched my face for mutual understanding. “There can’t be any . . .” She paused, careful to select the least offensive word. “Issues.”

“I get it.” It wasn’t hard to decipher what she meant by issues. I chose not to mention that it felt like the walls were closing in on us or that I was sweating through my blouse. “Don’t worry, it’s not my first rodeo.”

“Exactly. So here’s the plan.” Gwen lifted her chin and checked her watch. “I’m going to head out there now and make sure everything is under control and that everyone’s ready to roll. You’re going to stay here, have some water, have some fruit.” She signaled to a platter of neatly arranged slices of pineapple, mango, and cantaloupe, and a few bottles of Evian on the desk. “Then I’m going to come back and get you, and we’ll go in together. As always, there’s a table set up for you to sign at. There are plenty of Sharpies. We’re doing red for this book, as discussed. And clearly your fans are here in droves.”

“They never disappoint.” I smiled, pleased by my readers’ unwavering support.

Anxiety aside, I do realize what a gift that is. There are plenty of authors who write well-received novels, one-hit wonders that skyrocket to the top of the New York Times bestseller list and sell millions of copies. Unfortunately, their sophomore efforts frequently pale in comparison. There are other authors who write five, ten, fifteen books that all do adequately enough to turn a profit and keep their contracts coming. And then there are authors like me, whose audience has doubled, tripled, quadrupled with each new release. Thankfully, so have my advances. But above all that, I feel truly fortunate because my readers are the best readers. They communicate with me, and I communicate with them, from the very safe haven of my home office. Unseen. For that reason, among many others defined by my publishing house, I feel it’s my duty to show up for them. In this case, fifteen times over.

“And they never will disappoint,” Gwen assured me. “Just keep on being you. That’s all you have to do. They love you. Happy, authentic, engaged you.”

“Thank you.” I’ve worked with a lot of “Gwens” over the years, some grittier than others. This Gwen is a straight shooter, which I like. We both know that her little pep talk was a warning not to screw things up tonight. “I’ve got this.”

“Excellent.” I thought she was going to exhale, possibly reveal a hint of relief that her star thoroughbred was ready to race. But she’s still terrified I’ll break a leg.

She can’t be blamed for that. It has happened before, so to speak. It’s lore among the young girls who’ve passed through the halls of Lyons & Wilder. I’ve seen the way they size me up. They think I’m fragile.

Ward DeFleur sat on a wall.

Ward DeFleur had a great fall.

Not on Gwen’s watch, though. I guarantee she’s got an Ace bandage and a tube of Krazy Glue in her purse. She’ll repair me if it’s the last thing she ever does.

“Sit tight. I won’t be gone long.” She stood up and clipped her walkie-talkie to her belt.

“One question.” I raised my index finger.

“Shoot.” Gwen barely looked up from her cell phone. She was already sending a text, probably to my agent, Stephanie, who couldn’t be here tonight because her sister is getting married. Apparently, she asked her sister to switch the date and was horrified that she wouldn’t. In turn, I was horrified that Stephanie even asked in the first place.

“There are guards at all three doors. We’re in constant contact.”

“Just in case,” I added, so as not to seem dramatic.

“Ward,” Gwen said with intention. “You’re completely covered. Absolutely nothing will go wrong.” We locked eyes. “This is your night. Enjoy it.” She walked toward the door, turned the knob, and paused. Then she glanced over her shoulder and smiled. “Lucky number thirteen.”

Copyright © 2020 by Emily Liebert. From the forthcoming book PERFECTLY FAMOUS to be published by Gallery Books, a Division of Simon & Schuster, Inc. Printed by permission.