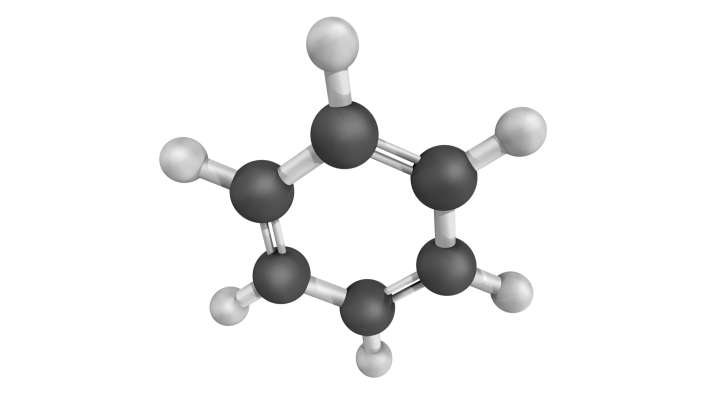 The molecule benzene is seen everywhere in biology, is important in chemistry, and has even been detected in outer space. But the way the electrons of its constituent atoms are shared has been a mystery for over a century. Now we appear to have a solution, and it took scientists creating a mathematical function with 126 dimensions to get there.

This doesn’t mean that the electrons of benzene exist in 126 dimensions, it means that if us humans want to understand how they interact as a whole we need to create mathematical functions that take each electron’s behavior in our three-dimensional world into account. Benzene has 42 electrons, so 42 times three dimensions gives us 126.

Benzene is a very important molecule although it is moderately simple to picture. Six carbon atoms are positioned in a hexagonal ring, and attached to each of these carbons is a hydrogen atom. Carbon atoms are very friendly and they can bond with up to four other atoms, but in benzene carbon only has room to bond with three other atoms, so one of the bonds between carbon atoms is a double one (as shown in the image above).

The question that has been perplexing scientists is what happens to the electrons in this double bond. Electrons have the same charge (negative); they repel each other so it’s not easy keeping them near each other. Another property that comes into play is the spin of each electron, which can have two values, “up” or “down”. Until now, analyzing a system this complex hasn’t been possible, so the precise behavior of benzine electrons hasn’t been known, which means the stability of the molecule in technology applications could not be wholly understood.

Reporting in Nature Communications, the team found that the agreement or disagreement between the spin of the shared electrons gave rise to the three-dimensional configuration, which has lower energy. Think of them as subatomic introverts, they’ll avoid each other if it takes too much energy to be near another electron.

“What we found was very surprising,” senior author Professor Timothy Schmidt from the University of New South Wales, said in a statement. “That isn’t how chemists think about benzene. Essentially it reduces the energy of the molecule, making it more stable, by getting electrons, which repel each other, out of each other’s way.”

The solution was possible thanks to a sophisticated algorithm that created “tiles” for each change in electron configuration, allowing them to map the wavefunction of all 126 dimensions. The solution will help refine our theoretical understanding of not just benzene but also carbon rings, which are important in applications such as graphene, among others. The creator, co-author Phil Kilby, believes that this “matching with constraints” software can have applications beyond chemistry. It could be used for a range of systems, from staff rostering to kidney exchange programs.