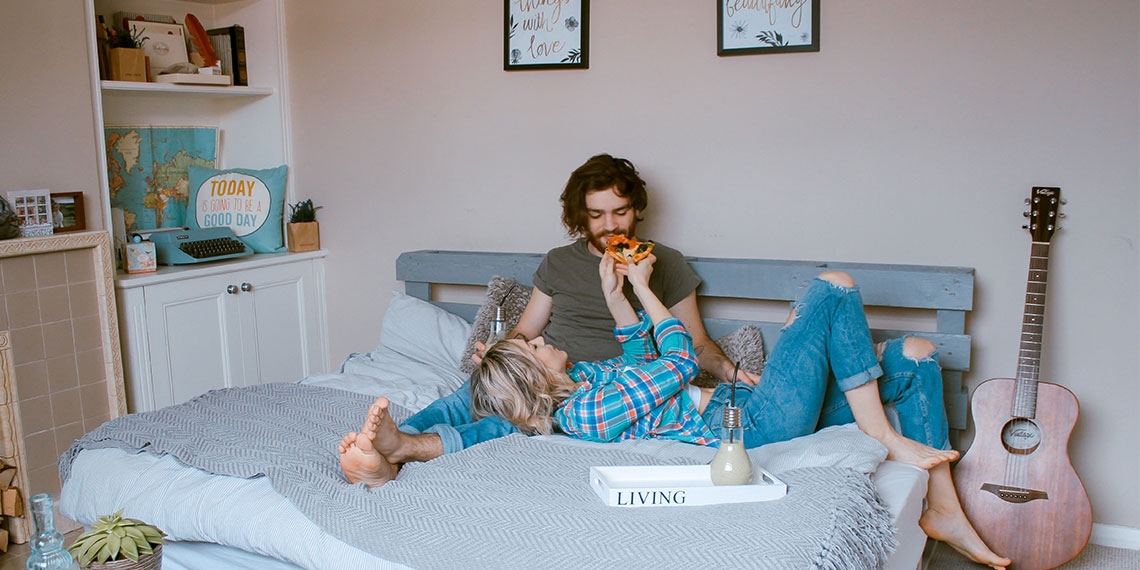 Moving in together is a pretty tantalizing carrot, especially in this economy: splitting rent, sharing groceries, plus easier access to your boyfriend’s adorable rescue dog who now takes up 75% of your Instagram? Seems like an easy play to call. And when a relationship is at the super fun, easy, tons-of-sex phase in the beginning, it can be tempting to consider.

You’ve been together long enough that he’s met your friends and stays the night on the reg, but it’s still fun to say “and my boyfriend will have a latte” to the barista. When you get butterflies just watching him screw in that one lightbulb in your closet that’s been out since 2012, it’s fun to mentally toss around the idea of making your life into an actual rom-com and taking a big step together. After all, there’s basically nothing you enjoy more right now than being naked together for two days at a time, eating macaroni and cheese in bed, and leaving the house as little as possible unless it’s to go to brunch with your friends and talk about how funny he is while they roll their eyes at you. But living together is a whole different world. It’s not like the sleepovers you’re having now, where you guys have sex multiple times in a weekend and shower together so you don’t have to spend even 10 minutes apart. So before you start looking at paint swatches to jazz up your shared bedroom, look out for the signs you should keep enjoying each other’s sex drive company and punt the “Moving In Talk” to a later time.

You’ve Never Gone Through A Big Illness Together

A v relevant point right now: You know what will make someone stop loving you? Seeing (and smelling) you with the stomach flu in a one-bathroom apartment. Simultaneous food poisoning in a one-bathroom apartment. The fact that if one of you is sick, the other one will probably be on the same train soon because you can’t get away from each other and he’s been coughing all night after he “accidentally” used your toothbrush yesterday. If the thought of having to ask him to pass you a new roll of toilet paper when you’re stuck in the bathroom after all-you-can-eat sushi still makes you blush, you ain’t ready to shack up.

You Haven’t Seen How They Deal With Basic Chores

Are you a hardcore laundry purist? The fact that he leaves his unfolded shirts on top of the dryer may scar you if you aren’t prepared. Living together involves sharing a bunch of household responsibilities like taking out the garbage, doing the dishes, and basic cleaning—none of which are sexy. It’s hard enough to coordinate chores with a regular roommate, let alone your new boyfriend. Nothing kills the mood on date night like an argument about whose turn it really was to scrub out the bathroom sink.

You Haven’t Let Him See You Without Makeup On

You don’t always have a full face on anymore, but in general, you’re still wearing tinted moisturizer and mascara even when you’re just chillin’. (There’s a good chance he’s still getting the lacy bras, too.) You’re still in that phase where you’re trying to make a good impression, like, all the time. Moving in together means that unless you want to sleep with your fake eyelashes on and wake up like Betty Draper in a matching silk pajama set, he’s going to see you with your retainer in and your night cream on. Hot.

You’re Still In The Eating Out Phase

Not the sex thing, which as far as I’m concerned, should not be a phase. I mean you’re still mostly hitting up happy hours and restaurants and you have yet to hit the hangry stage together after work when you’re staring at a fridge containing nothing but expired ravioli and wilted lettuce. Weeknight dinners at home are all about chicken breasts and tossing together some kind of bowl based on whatever leftovers you still have sitting there. Maybe you’ve had a laid-back dinner at your place a time or two, but chances are at least one of those occasions was takeout, and that’s still not the same as your typical night alone when you’re eating cold pizza that’s been in the fridge since last week.

You Have No Idea What His Money Situation Is Actually Like

A huge prerequisite for deciding to move in together is knowing where each other stands financially. It can be awkward to talk about, but it’s better than you moving in and him springing on you that he never turns the A/C on, ever, because he can’t afford to do that while paying off his massive student loans. No shame, but def something you want to know before you pack up the UHaul. You might not be in a place where you’re ready to discuss things like how much you actually spend on wine per month or how you’ll split up rent when he’s still being cute and covering the whole dinner check every time you go out.

If nothing else, consider this: the beginning of a relationship is magical. Everything in that first six months is fun and exciting. It’s all brand new. It’s a time for compliments, annoying PDA, and feeling superior to all of your single friends. Hey, don’t be afraid to pat yourself on the back—finding love is hard, even if all you really know so far is that he gives great head and prefers his scrambled eggs slightly burnt, which you find adorable because you’ve known him for three months. The point is that you should savor that while you can.

Assuming you do stay together, there will be tons of time to do all the boring stuff that comes with living together. Soon enough, you’ll be sharing a closet and he’ll be complaining that he doesn’t want to spend another evening watching Gilmore Girls reruns. As time goes on, you become more comfortable and therefore more honest with each other. That might sound boring, but it’s not. It makes your connection stronger, more dependable, and better able to weather storms and make it out the other side during very serious events (like when the dog throws up all over your duvet in the middle of the night). And then, later on down the road when you’ve sorted out your laundry differences and he’s finally figured out how to load your dishwasher correctly, maybe moving in will be back on the table. If you still think he’s cute in nothing but gym socks and one of your too-small pajama shirts that he tugged on to deal with the duvet crisis while somehow forgetting his pants, that’s your sign. That’s when you know you’re ready. Until then, you might as well enjoy that new-boyfriend glow, and having your own bathroom, while you can.