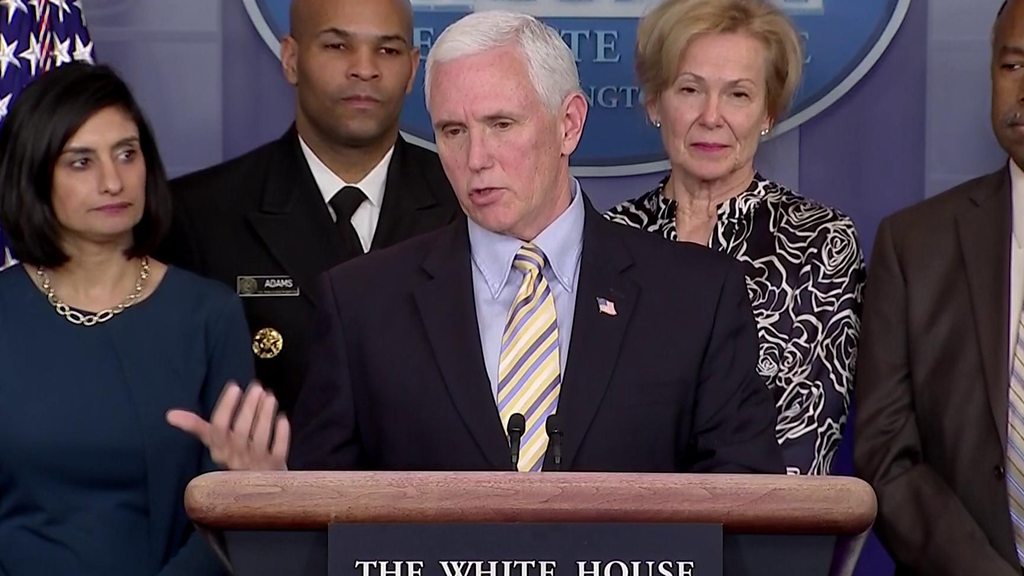 The US is to extend its European coronavirus travel ban to include the UK and Republic of Ireland.

Mr Pence also announced that free coronavirus testing would be provided for every American.

Speaking at the same news conference, President Trump said he had been tested himself. The White House later said that the test was negative.

The US has confirmed 51 deaths linked to the pandemic and 2,488 infections.

In the first six weeks of vetting for the virus at US, 17 travellers were placed under quarantine at medical facilities, a senior official at the US Department of Homeland Security told Reuters news agency. During that period, more than 30,000 travellers were also asked to self-quarantine at home.

More than 132,500 people have now been diagnosed in 123 countries, according to the World Health Organization (WHO). It says Europe is now the epicentre for the virus, which originated in China.

Following Italy’s lead, Spain is poised to declare a 15-day national lockdown on Monday to battle the virus.

How is the US travel ban being extended?

As of Saturday morning, the US had already suspended travel for 30 days from 26 Schengen countries – 22 European Union members and four non-EU.

The travel ban was met with anger and confusion in the EU, with leaders accusing President Trump of making the decision “without consultation”.

The UK and Ireland had been exempt but Mr Trump said on Saturday: “They’ve had a little bit of activity, unfortunately.”

Such people would be “funnelled through specific airports and processed”, he said.

Why did Trump take a test?

Speculation over the president’s vulnerability to the virus had grown after he had interactions with least three people who later tested positive.

On Saturday, the 73-year-old told reporters he had had his temperature taken before stepping into the room and it was “totally normal”.

The White House is now conducting temperature checks on anyone who is in close contact with the president and Mr Pence.

Cost had been a concern for many ordinary Americans considering a test for coronavirus.

More than 27 million people in America have no medical insurance at all, while tens of millions have basic insurance that often only covers a fraction of the cost of any check-ups or treatment.

The authorities have also been accused of being too slow to supply test kits.

On Thursday, US lawmakers said fewer than 10,000 people had been tested in America.

On Friday, Mr Trump declared a national emergency which allows the federal government to tap up to $50bn (£40bn) in relief funds.