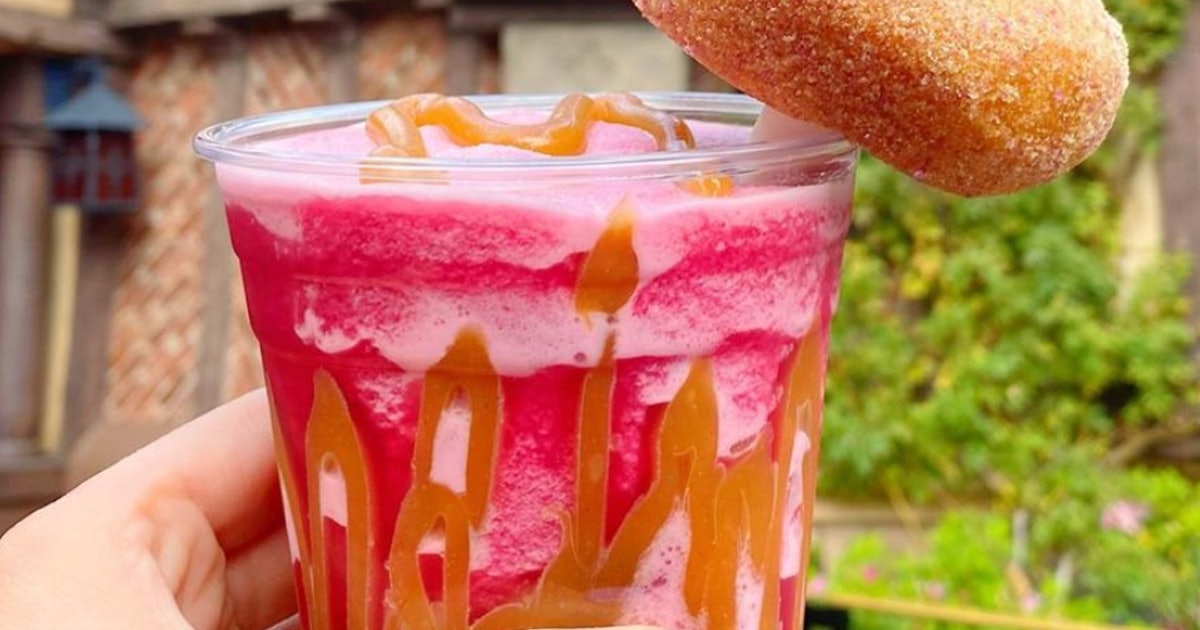 The happiest place on earth is turning a classic lunch into a new drink offering. Disneyland’s new Peanut Butter and Jelly Slush is the twist on the sandwich that no one saw coming — and according to numerous people who’ve tried it, the concoction is actually delicious. In addition to the complementary flavors of grape and peanut butter, the refreshing new slush promises to satisfy your sweet tooth with the addition of a cake doughnut rolled in sugar.

Since Mickey and co. first unveiled the new creation back on Feb. 29, theme park visitors have been busy posting about the Peanut Butter & Jelly Slush on social media. Not only is the idea of a drink based off the classic sammie a pretty novel one, but it’s also undeniably ‘Gram-worthy with a magenta color, stripes of caramel, and a giant sugar-coated doughnut on top. According to numerous people who’ve tried it, the warm weather-ready sip is currently available for $7.49 at Maurice’s Treats in Fantasyland, which is in Disneyland Park in Anaheim, California.

While the idea of drinking a liquid version of a PB&J sandwich might sound a little off-putting, tasters who’d tried it seemed to love it.

Instagram user @WeKnowDisney called the confection “childhood in a cup, raving, “We’re not the biggest fans of grape flavor, but we couldn’t get enough of this treat! It tastes EXACTLY like a peanut butter & jelly sandwich.⁣⁣” Meanwhile, @PhatDisneyFoodie warned, “The drink was SOOOOO INCREDIBLY SWEET,” but said that he loved the “sugar overload.”

The rave reviews plus the fact that the slush promises to brighten up your Instagram feed with a spring-worthy aesthetic makes it easy to see why people are jumping on the PB&J Slush bandwagon.

If a PB&J Slush doesn’t sound like it’s up your alley, there are plenty of other delicious new sips and bites on offer at the happiest place on earth. With St. Patrick’s Day just around the corner, Disney has rolled out two new mint-infused offerings: The Shamrock Brownie Shake and the Emerald Isle Sundae, which both start with scoops of mint chocolate chip gelato, chocolate sauce, and whipped cream.

The festive shake also contains milk and Nutella brownies, while the sundae comes in a waffle cone with scoops of pistachio gelato as well. Both of these treats can be found at Vivoli il Gelato at Disney Springs.

Visitors can currently get their hands on all of these offerings at Disneyland, so swing by Maurice’s Treats and Disney Springs and try them for yourself.